After Fast Five premiered, there was a lot of talk about the future of the franchise thanks to the scene in the credits. It left many people confused. How could Letty (Michelle Rodriguez) be alive, when she clearly died in The Fast and The Furious?

We will get to that later. More importantly, the time line of the films became more clear.

They mentioned that Fast & Furious 6 (Trailer) would follow 5, and part 7 would be set AFTER Tokyo Drift. Basically, films 1, 2, 4, 5, and 6 of the series are in the correct order, and 3 is set after 6, but before 7. They also went through a little bit of development hell, where they were going to break 6 into two parts, but thankfully went back to just one film. Either way, the questions you have at the end of 6 will be answered next summer when part 7 comes out. 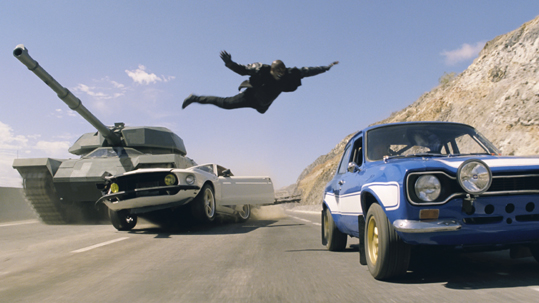 I don’t give a fuck about any of that, because HOLY SHIT A TANK!
Long story short, there is a highly tactical gang of drivers out there in Europe, who are trying to assemble a device that can shut down an entire city for 24 hours. That is a pretty dangerous weapon and could kill a lot of people. Hobbs (Dwayne Johnson) and his new partner Riley (Gina Carano) know the only people who can help them out are a group of lesser international criminals on the run from the law.

Dom (Vin Diesel) and Brian (Paul Walker) obviously refuse to help, but when Hobbs shows pictures of Letty, his love who they thought died years ago, they assemble the team (Tyrese Gibson, Ludacris, Sung Kang, and Gal Gadot) to find out how this picture exists and if she is really alive. Saving the world isn’t on their mind, just finding the girl.

But with Shaw (Luke Evans) being a criminal master mind, always a few steps ahead of the authorities, can their rag tag group even follow in their exhaust fumes? 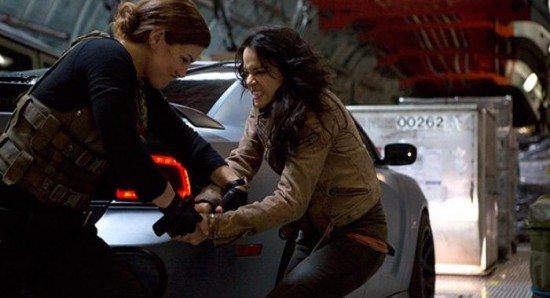 Of course the women have to fight each other. Gender equality people, let’s see some.
Fast & Furious 6 is being lauded as one of the best films in the franchise, and action movies in general. I will give the movie that. There is action throughout the movie, from car chases, to scenes completely void of cars. It doesn’t apologize for anything in the film, and goes at completely ridiculous lengths for an explosion or two.

But personally, it completely changes the genre of the film, which grinds my gears the most.

To me, everyone felt like a super hero in this film. There are TONS of hand to hand combat scenes between the two groups, and it felt like watching a live action Dragon Ball movie. Ridiculous feats of strength and long battles where neither side got hurt, when most of these people are just retired car racers. It bugged me to no end that they all basically became invincible just for the sake of a bigger action movie.

On top of that, I don’t think it flowed well. Almost every scene I felt confused due to the plot of the movie. The heroes were constantly doing nonsensical things. Nonsensical to their character and to a normal human being. They wedged a street race into the movie that plot wise didn’t make sense (nor did anything out of that London woman’s mouth before the race). At one point four or five of the bad guys get arrested and end up making their escape, yet one of the group is no longer seen in the movie. I guess they just decided to write him out of the movie.

The climatic plane ending is ruined for me thanks to it apparently being the longest run way known to man, making the ridiculousness too much to bare. It also features an Amnesia plot line, which I feel is one of the laziest plot developments you can ever come up with.

Yes, if you changed the movie to be something completely set apart from the Fast & Furious universe, I would probably enjoy the movie more. But we have five movies that are grounded (mostly) in reality, a shift in genre I can’t get over. It is breaks all the rules of the series, despite trying its hardest to include the previous five films. If it was an original movie (and better acting), I might have loved it.