Here is a dumb question you can ask your friends and coworkers if you want them to dislike you a little bit more than they already do.

“Before Mount Everest was discovered, what was the highest mountain on Earth?” This will make them ponder and come up with some bad guess, and you can quickly toss in a “It was still Mount Everest, it just wasn’t discovered, dipshit!” And again, you will lose friends.

My main problem with this joke, as a geophysicist/movie reviewer, is that it assumes that Mount Everest was always the tallest mountain on Earth, and that things don’t change. But we know they change, we know India and Asia weren’t always smashing into each other, so there is a real answer to the question of what used to be the tallest mountain before Mount Everest took over.

Turns out this knowledge is hard to get to and a bit awkward. But know there is a real answer out there. Just modern technology hasn’t always existed.

Oh yeah, I am supposed to talk about Everest. I think I should watch it on a large screen to give the large mountain its necessary honor.

Like a very gentle soft touch on its top most tip.

About 50-55 million years ago, India collided with Asia. It was probably the fastest moving tectonic plate ever, as it split with what is now Madagascar, presumably looking for a new climate. India was on an oceanic plate that was subducting under Asia at the time, which is the why it moved so fast. Once they crashed, the Himalaya mountains decided to be a thing, as the two land masses crumbled into each other, upward and forward! They grew fast and grew hard, making some really tall mountains that are still growing today. Mount Everest, aka Sagarm?th?, aka Chomolungma, currently sitting at 29,029 ft above sea level. Everest’s main purpose seems to be looking tall and killing crazy white assholes.

Oh, but maybe you care about those assholes? Well in that case, the film itself takes place in 1996, based on a real life disaster that took place that year and had like, five books written about it from survivors. Lot of primary sources to work with.

But our main character is Rob Hall (Jason Clarke), owner of Adventure Consultants out of New Zealand leads groups up Everest for large sums, helping them the whole way. He was the first to do this as a commercial business. There is also Scott Fischer (Jake Gyllenhaal), main guide of Mountain Madness, who started doing the same thing later. In 1996, it was extremely popular though, and there were dozens of groups up there, all trying to use the few mountain paths to make it to the top, around the same time, causing a lot of problems.

Speaking of people, we have a few more notables. Like the fact that Rob’s wife (Kiera Knightley) is at home, pregnant, ready to give birth not long after his return. And Jon Krakauer (Michael Kelly), a journalist who is going to write about his experience. And Doug Hansen (John Hawkes), a regular guy who worked three jobs to save up money to hike Everest, making his second attempt to the peak to help school kids realize that dreams come true! And Beck Weathers (Josh Brolin), from Texas, a cocky dude who feels good when he climbs, but is depressed back at home. And and and and of course Anatoli Boukreev (Ingvar Eggert Sigurðsson), one of the guides working with Fischer, and a general bamf climber.

Honestly, plot reviews are easy in this case, because I don’t have to describe bad things happening. I just have to talk about who is involved. And since it is such a big cast, here are a few other people involved!

Emily Watson played the base camp leader with Elizabeth Debicki as their team doctor. Thomas M. Wright, Martin Henderson, and Tom Goodman-Hill play the other 3 guides and Sam Worthington plays a literal Guy who works with Adventuring Consultants, and in real life later becomes their director and CEO. Naoko Mori plays Yasuko Namba, who had climbed 6 of the 7 main peaks with Everest as her last, and Robin Wright as the wife of Beck Weathers. 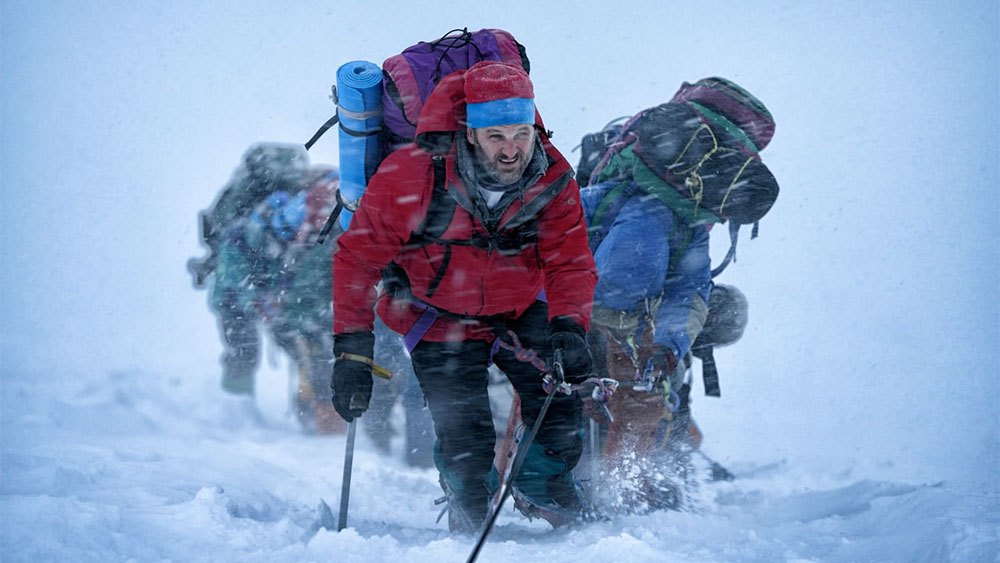 Color coding the hikers is a good strategy, but I feel bad for anyone who got stuck with red.

Apparently, sometimes, I get a little bit emotional over some geology. Because at least one scene in particular had me bawling my eyes out. I mean I found myself crying in the dark theater, surrounded by strangers, crying for like two minutes. It wasn’t even at the end of film, it was probably about 80% of the way through. I am just an emotional wreck since I had a baby, I guess.

Everest is an intense, dramatic, and gorgeous film. It was made in particular to be experience first hand on an IMAX screen. Sure, in the beginning, it is a bit weird as we get some character introductions, watching them hike to base camp and the weeks of training before they finally climb. It isn’t just a group of people running up a hill and facing constant threats. They don’t slowly die one at a time like it is a horror film. This is based on a true story and the attention to detail is astounding. It is easy to get things right when you have multiple books to figure it all out.

The last 40 minutes is extremely gripping. Not knowing the actual story, I didn’t know who would make it out alive so I was afraid for everyone. They all feel like real people and it is easy to connect with many of them before their eventual ascent.

Finally, I think my favorite part of this movie is that it isn’t about a group of people trying to battle nature and show their dominance. It is really about a mountain, who gives zero fucks about the insignificant life forms that sometimes explore its slopes. It is about how nature is unforgiving and doesn’t care about how much prep work occurs, it will do what it wants, when it wants. It is about how life doesn’t care if you are a good person, or a bad person, a newbie or a trainer climber, you are just as likely to get killed in a heart beat.

Nature is a fucking beast. And Everest is fucking good.