I was very excited when I first saw the trailer for Epic. The music is perfect, not a lot is spoiled, it looks beautiful, and looks like a great new franchise.

You know what I don’t like? The title. You know how hard it is to look up things about Epic? Don’t just search the title, you will get dumb internet images. “Epic Movie” is out, because of a bad movie having that exact same name. I had to resort to searching for “Epic <character/actor name” to get anything close to finding suitable images or posts. Come on people, think about the ease of finding your movie before you name it. Unfortunately, it was also made by Blue Sky Productions, who haven’t really made anything I really loved, their last effort being Ice Age 4: Continental Drift. 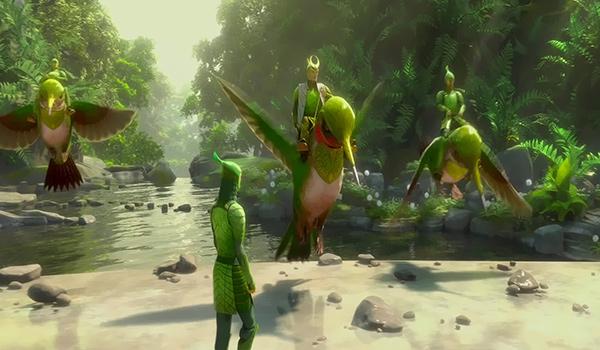 Just look at how sexy those birds are. Mmmmhmm.

This movie begins with death! Death before the film takes place (this is a PG movie). MK (Amanda Seyfried) is en route to her fathers house in the middle of the woods. She is almost 18, but her mother just died, and so she has to go live with her dad, who is basically a stranger to her. You see, Professor Bomba (Jason Sudeikis) believes there is a hidden ecosystem in these woods, hidden from human eyes. They react on a faster plane, like flies, so humans can’t really see them because they are always moving so…fast. Yeah, he went crazy and his wife left him. Happens all the time.

But holy tiny men, Bomba is right! In fact, it is a special day, the Summer Solstice on the same night as the Full Moon! Time for the Queen (Beyonce Knowles) to pick a new heir for the next 100 years. After all, only the queen can restore life to the forest if the evil Mandrake (Christoph Waltz) of the Boggarts (swamp/decay creatures) come to mess things up.

The leaf men won’t let that happen! Ronin (Colin Farrell) has sworn to protect her, but young Nod (Josh Hutcherson) is making things difficult by quitting. After some bad things happen, MK finds herself in the woods and magically gets shrunk down to their size. Now she is in the middle of a forest civil war, with the threat of 100 years of swamps on the horizon.

Of course, this could all be some sort of PTSD after her mom’s death for all we know. Chris O’Dowd and Aziz Ansari play a snail and slug, respectfully, Pitbull a frog, and Steven Tyler a glowworm. 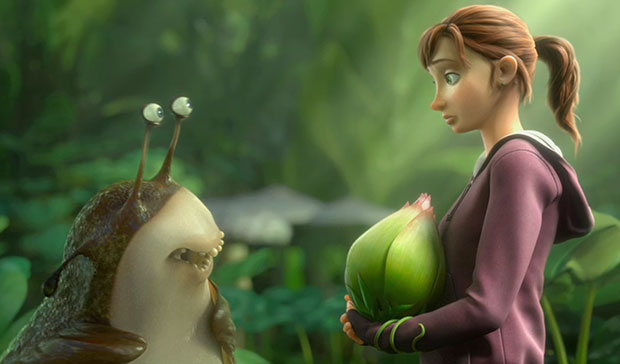 “No shell over here baby, I’m a slug” – Aziz. Possibly my new favorite line ever, and I don’t know why.

Epic is loosely based on the children’s book (that no one has heard of), The Leaf Men and the Brave Good Bugs. Basically, it took the character ideas, and made an original story. The plot itself isn’t the most exciting or original, and was filled with certain plot holes that made me shutter.

But it’s pretty, though.

One of my biggest complaints is inconsistencies in a movie. In this case, what is the real difference between a tiny human, a plant/animal human hybrid, and an actual plant or animal.

It’d be simple if all animals and plants could talk and be human-like in this movie, but we have frogs and snails that can talk perfectly, living out their lives and jobs, right next to birds who are just 100% animal, no voice. We have flowers that are just flowers, right next to some flowers that run around, gossip, and have arms and legs. Where is the balance? How does this work?

With the leaf men, they aren’t leaves at all. They are basically tiny humans, with just leaf armor as clothing. Nothing else in the forest outside of the queen appears to be a tiny human, so I found it all confusing.

But it’s pretty, though.

Epic ended up being just an average film, not living up to its (poor) title. If you ignore how confusing the world ends up being, it is a cute tale that is outrageously incredible to look at.

“Hey, it’s a kids movie, stop thinking so deeply about the world!”. No, that is a bad excuse, and leads to movies like Cars 2.