That was my way of both answering the question, and providing a reason why.

The movie begins with the US Army fucking up some terrorists. Or else that is what it looks like. They are at a funeral, but is also a guy they have been looking for, for a long ass time. It might not be him, but 51% chance it is! The secretary of defense (Michael Chiklis) says no go, but the President says go. So they do it. Whoops, civilians.

Long story short, this movie is about a super computer. That supercomputer can gather intel from pretty much anything electric or connected via remotes or on a network. Computers, cell phones are the big ones. It doesn’t like that the president and others put people at risk by ignoring its advice. The Secretary of Defense is cool though, in its mind, and thinks he should be president. So she tries to kill off the president and the other people on the chain of command.

Shia LaBeouf (slacker with a twin brother who was in the army, died, was super good at computer stuff) is being blackmailed, and so is Michelle Monaghan (single mother, who is being told her son will die if she doesn’t do the plan) are both being called by the mysterious woman (computer) and told to do things.

Which is basically get a bomb to DC and blow up the president. No biggie. Also Rosario Dawson and Billy Bob Thornton are trying to stop em, and figure out why they are so good at escaping shit. 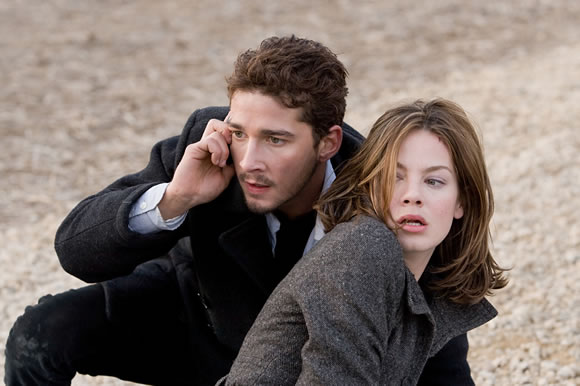 “Is this Michelle? No no nononononnono!”

Know what I hate? Shia LaBeouf, and Spielberg’s fascination with him.

Argh! Opposing forces! This has a ridiculous number of action scenes and chase scenes, that also go on for long periods of time. Heck that is most of the movie. None of them even seem plausible, even with the possibility of a super computer. But hey, you can stretch some imagination. But that is all the movie has going for it. Those scenes, because there is very little down time or real development. So its just okay. I like my super computer movies to have some nice philosophical discussions in them too.