Don’t Breath. Don’t Even Breath. Breath and you’re dead. Wait, no, the opposite of all of that. Modifying a Doctor Who quote doesn’t really work in this context.

This is another film that I was almost happy to announce I knew nothing about going into it. But then I went and saw a regular movie in the theater and caught the last 20-30 seconds of the trailer. Damn, I was so close to not even having the slimmest plot outline.

But since that cat is out of the bag, the director of the film is Fede Alvarez who before now has only directed one feature film, the recent Evil Dead. Hey! That also had the same star as this one. And hey! Evil Dead was kind of awesome in a gory, never want to watch ever again way.

So paint me a little bit tickled, as I practice holding my breath like I am riding in a car through a tunnel, thinking I will get a wish out of it.

Holding your breath as an old man walks by is a sure way to get your wish of not smelling him.

Detroit kind of sucks. Not the sports teams, they are awesome of course. But the area is terrible, many properties are abandoned, and people just want to get out of there. Just watch the documentary Detropia, I reviewed it last week.

People like Rocky (Jane Levy) want to leave, but they are poor and in terrible abusive situations. That is why she turned to robbery. With her boyfriend, Money (Daniel Zovatto) and best friend Alex (Dylan Minnette) they break into rich people houses and take only items to sell to dealers on the streets. If they take too much money, it is a bigger crime and they want to be prepared if they get caught. It is easy for them, because Alex’s dad works for a security company, so Alex is able to break into his desk to steal house specific keys to deactivate the alarms.

Well, Money gets a hot tip from one of his guys on the street. There is an old man (Stephen Lang) who lives along, on a street that everyone has abandoned. No police presence, no nosy neighbors, just him and a dog. He was an Iraq war vet (The first one) and injured while there, but more importantly, he made bank when his daughter was killed in a car accident from some rich kid. So he is sitting on six figures and he potentially keeps it in his house. Oh and he is blind.

So yeah, Rocky, Alex, Money are pretty much assholes. They are going to steal from a lonely old man, blind, war vet. They are going to take that money and move out of the state, somewhere like California and make something with their lives. They just, you know, have to be the worst people ever. 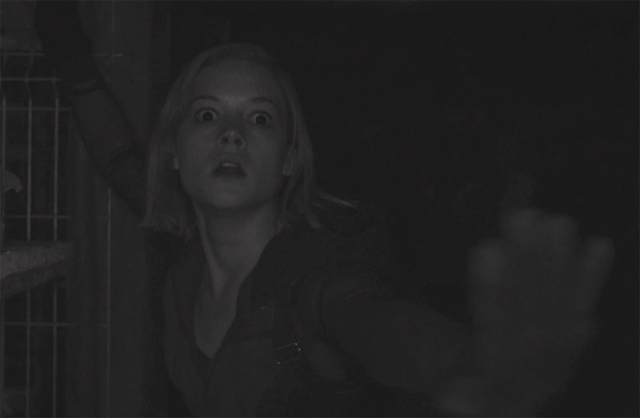 I said worst people ever, not biggest pupils ever.

Alvarez has created something unique, yet familiar, scary, and morally out the window. At the same time, he created a movie that has 88 minute run time including credits and still feels incredibly too long.

And that is incredibly annoying because I was totally digging the story. Now, I hated the three young characters. Each one, regardless of their reasons for being in the house. They are all asshats for deciding to try and steal from him. But at the same time, they don’t make the Old Man to be a nice fellow either. It isn’t rooting for the bad guy, it is rooting for mutually assured destruction. I just wanted everyone to punish and get what is coming to them, while at the same time, mad the situation is even occurring in the first place. So yes, it toyed with my emotions and messed with my perception of right and wrong.

That added together could be a reason I just hated the ending. I can’t tell you exactly how long, but there was a shift about 10-15 minutes left in the film that I just wish didn’t exist in anyway. Too much is revealed, a side is chosen to be the “champion” of the film, and then it just drags on and on. There were two very appropriate places it could have ended before it got too full of itself. But it continued. Then characters continued to make terrible decisions. It became repetitive and I couldn’t wait for the end.

The cinematography was lovely, including a nice long house one take from the inside, the pitch dark scenes were wonderful, complete with large pupils, and Lang knocked it out of the park as the old man. The rest of the acting was pretty average.

This is about three fourths of a decently entertaining movie that doesn’t hold your hand and make things easy to watch. But at some point the filmmakers decide that they are bored with that and turn it into a more standard film with an almost goddamn happy ending, despite the many unhappy circumstances involved.