Heyyyy, family movie based off of kids books. I see you. Diary Of A Wimpy Kid I actually saw a few years ago. I saw it for like, $3 or something, and said why not. It could be interesting. Kids movies aren’t ALWAYS bad. But the potential is high.

Either way, this shit has been blowing up. A movie a year, with the same cast. Kind of like the new much faster Harry Potter. Watch out JK Rowling! 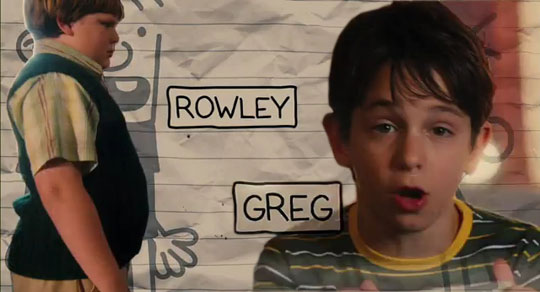 Ah I get it. It was a book, so it takes book drawings and makes them into people. HOW CLEVER MOVIE. I mean, who cares~

Greg (Zachary Gordon) is an 11 year old kid, about to go to middle school, and is pretty wimpy. What does that mean in this context? Eh, he just sucks at being social and telling people his true feelings mostly. Thankfully he has a journal he gets to write in, where he can vent his shit and whine all day long. If only people could read his mind.

Well poor Greg wants to be popular when he goes to middle school, so he is prepped. But his best friend Rowley (Robert Capron) is a total lameo, and uncool. Having him as a friend might drag him down! So maybe he can make him cool by default, or at least hope that his uncoolness wont rub off on him.

Greg quickly meets a girl who works on the school paper (Chloe Grace Moretz) who might have the hots for him, but because she is different, that makes her not cool. WHAT THE HELL GREG. So instead Greg tries to become popular his own way, and fails over and over again. In fact, Rowley becomes more popular than Greg could ever try. Too bad Greg is such a jerk face. Oh well, hopefully the curse of the stinky cheese doesn’t do anything in this movie.

Lots of other players in this movie too, such as his parents (Rachael Harris and Steve Zahn), older brother (Devon Bostick), and younger brother (Connor Fielding). He also has some ‘friends’ (Karan Brar, Grayson Russell), and not to mention mean old Patti (Laine MacNeil). 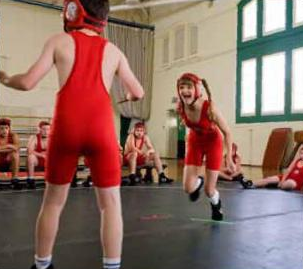 Patti is a mean wrestler. Didn’t you know? She will kick your dick, without remorse.

So this book series is actually an interesting one. They kind of make the main character a jerk, and actually make it hard to sympathize with him. I mean, sympathy is possible, since he is only a kid, but it is definitely hard. Sure he just wants to be liked, but he is an egotistical fucker who is willing to stomp over his friends. Very fucked up, Greg. Thus the wimpy ness I guess.

The kid who played Rowley was pretty entertaining though. Technically the only aspect I found entertaining. Kid might go far, be the next funny fat guy. Watch out, in like, 10 years or whatever. And in 15 he will be coked out of his mind, but we can always remember the good times.

But other than, a very simple story, and not much really happens besides a kids quest to be cool, and you know, failing. I can’t wait to watch the rest…err.