Man, the cover for Crazy Heart is pretty epic, in my opinion. 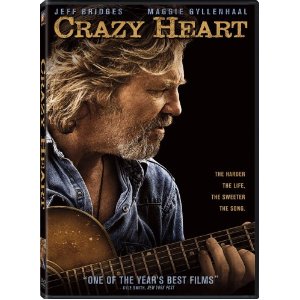 Maybe that guitar turns into a gun? Yeah!

Jeff Bridges is the lead, and he is an old, alcoholic, former country star. He used to be big shit, but you know, isn’t anymore. Making ends meat by traveling in the south, playing smaller shows, and getting more beer! Well, eventually he meets Maggie Gyllenhaal, who is a journalist looking for a good story. She is divorced with a son, and they kind of hit it off, in a creepy way.

So he is like, “Hey! I wanna get my life on track!” So he goes to Colin Farrell, a past “student” of his who is big now, and gets to open up for him. Despite thinking he shouldn’t have to, because he used to be better. He wants to do an album with him to get on track better, but Colin has to do a few more solo albums. So he enlists Jeff to write some songs, because he is apparently good at that shit too. Well. He relapses, has relationships problem, drinks, gets hurt, and you know, crazy shit.

Crazy Heart shit. He also has an old friend who helps him through his problems in Robert Duvall, playing helpful bartender. (Or at least the most helpful a Bartender can be to an alcoholic.)

But that is the movie in a nutshell. 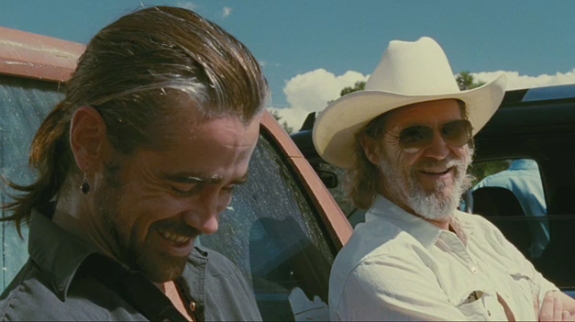 There are literally no better pictures of this movie on the internet.

Although it had pretty good acting, I thought it was…too long drawn out. I lost interest. Well done everyone, but just, the story wasn’t interesting enough for me. So I wouldn’t want to see it again.