Skip to content
HomeUncategorizedCloudy With A Chance Of Meatballs 2

Puns. Puns are an often overlooked humor tool that are wildly taken for granted. In fact, some people respond to puns with groans!

Those groaners I have to imagine would not enjoy Cloudy With A Chance Of Meatballs 2 which has more puns than the number of acupuncturists who also happen to be backstabbers. 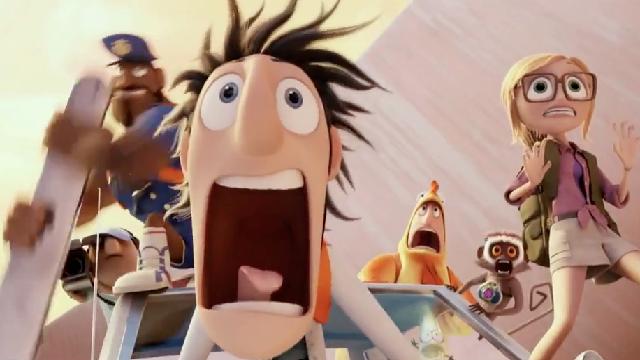 I wonder how many animated dicks could fit in his mouth. For research.

CWaCoM2 takes places immediately after CWaCoM, with the town of Swallow Falls in disarray and covered with food. Flint (Bill Hader) and his friends are excited for the rebuild, but they are forced to temporarily move to San Franjose, California, while Live Corp cleans up their island…for science! After all, Live Corp is run by Chester V (Matt Forte), Flint’s hero since he was a kid and the coolest scientist ever. It is usually a good idea to let trained professionals take care of a job.

Unfortunately, the clean up isn’t going as smoothly as they had hoped. The FLDSMDFR device was not destroyed after the first film, and it has created animal food hybrids to take over the island! They are also learning how to swim, and if they do, they will spread out and attack the rest of the world! Scary!

So it is up to Flint, with the rest of his crew to save the day. Sam Sparks (Anna Faris), girlfriend and meteorologist, Tim (James Caan), father, Brent McHale (Andy Samberg), former bully and current idiot, Manny (Benjamin Bratt), jack of all trades, Earl (Terry Crews), security guard, and Steve (Neil Patrick Harris) the monkey.

We also get introduced to Barb (Kristen Schaal), the ape. The fact that she is an ape, and not a monkey, is a very important difference.

Charles V reminded me a lot of Professor Hawk from Dexter’s Laboratory.

When I saw the trailer for CWaCoM2, I knew there would be an overwhelming amount of puns, but I still somehow underestimated how many they would actually throw at the viewer. At one point, the PPM (Puns Per Minute) value had to be greater than 10. Just constant puns, one after another, with hardly any time to comprehend them all.

Personally, I think the film was a bit too short to tell the story it wanted to tell. A lot of the movie felt rushed, especially once they first got to the island. In order to appease the kid viewers, they must have moved quickly to keep their interest. That has to be the biggest negative, not giving enough time to really flesh out the island and “foodimals.”

At the same time, I was equally impressed with the film’s ability to include “background jokes.” Once I saw the first few, my eyes were constantly watching the edge of the screen and I was surprised at how often they appeared. Heck, Joe Townee from the first film was snuck into this film twice. Unfortunately he had no lines this time, because his voice actor, Will Forte, was now voicing a new major character.

This film is filled with its fair share of low brow humor jokes, but an almost equal number of intelligent-ish jokes. I guess the point I am really trying to make is that this film has a lot of jokes, and they vary across the whole spectrum (outside of the adult themed joke territory). Despite the new writers and directors, I think it is a very worthy sequel to this franchise, and I would definitely watch a third one should it ever get made.