The Dr. Seuss experience is currently in Houston, Texas until August 15, and tickets and information can be found here.

Seuss, Seuss, everyone loves Dr. Seuss. Some people love it enough to use it as a political pawn for some reason. Here is a clip of Ted Cruz reading from Green Eggs and Ham so you can have a little bit of annoyance in your life.

When I found out that there was something called a Dr. Seuss Experience coming to Houston, I was curious. I had been getting ads for this for months, and when I looked it up, I still really didn’t understand what the hell it actually was. Weird buzz words like the next big Instagram trend. And some pictures. But also…what is it really? I don’t want to keep asking. I want answers. So I went with my kids.

First of all, it is much smaller than I expected. It is meant to have rooms and themes from nine famous Dr. Seuss books. The beginning large section that connects the rest of them is a large “balloon” maze, with words hidden on them, to help complete a phrase from Oh, The Places You’ll Go!, which is optional like everything else. You don’t have to use the maze to get to any other room, but it is still the central hub, and presumably the place where the costumed individuals will hang out.

For the rest of the rooms, I will separate them into The Good, the Okay, and the Bad. 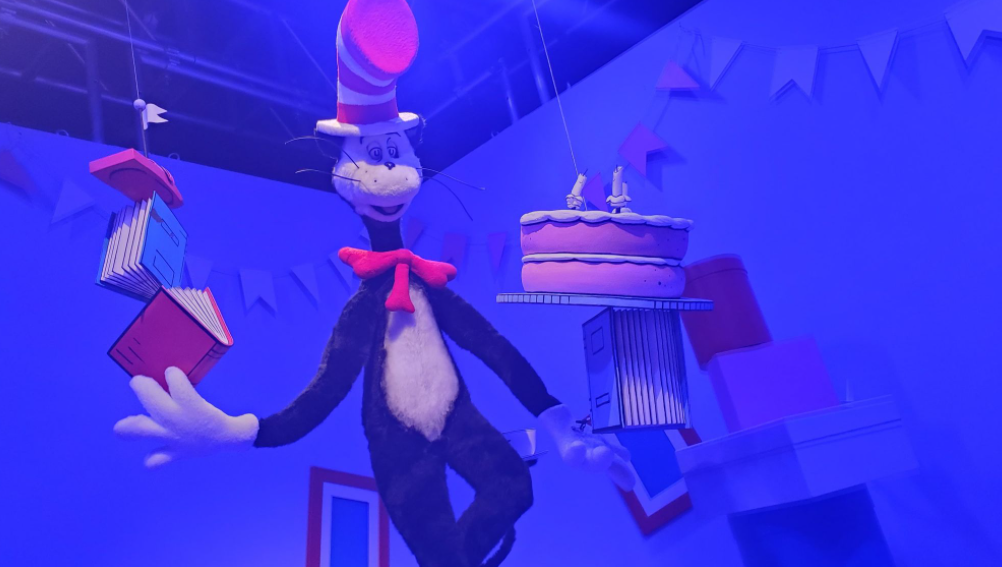 This cat in the hat stands on a throne of lies, not games!

The Lorax Rooms: The Lorax room had three parts to it, one with a Onecler wanting to tell you a tale and giving you a path, to see the desolation of the forests, or just go to the beautiful not destroyed trees. The desolation section doesn’t really have much going on in in it, nor did the entrance, but the room with the Truffula trees is gorgeous. They have a few of them, there are swings, and the color scheme of the lights makes you feel like you are in a dream.

The Grinch Room: This room is medium sized, with a darker hue with Christmas lights and stars lighting it all up. This room is actually a game, with a large central piece representing presents The Grinch had stolen. It has an ever moving wheel around it with about 20 or so boxes. The goal is to use basic fish hooks to hook presents from the center ring, to bring back to your teams side. This thing is automated, in that it is a 60second game, with a timer for you to see, and after it finishes with a small delay, it will continue regardless of anyone being there at all.

The fishing was hard, the time limit was stupid, and it was dumb to be automated since they had people in there anyways, but it still was fun to get to try and do something. We had more fun when we ignored it and just tried the fishing aspect of the present hunting, which depending on how full it is, could be hard to do. 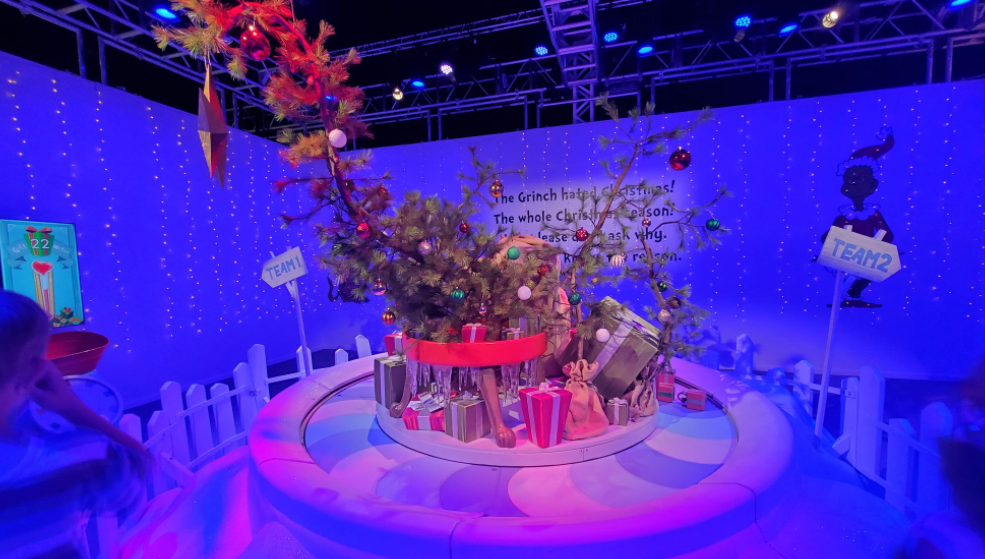 The true meaning of Christmas is always presents.

If I Ran A Circus Room: This one can stay okay, despite being a bit disappointing. There are two components to it. The large component is a swing carousel, that mostly fits the young only. Not that you’d want to ride it, because it goes incredibly slow around. You can easily walk faster at a regular pace than this thing ended up spinning.

There is also a wheel to spin! It has no prizes. Just pictures from the books, with a guide to act a certain way if something comes up. Really basic, but you can tell there was some level of effort in this one, even if the individual items themselves are bit disappointing.

Wocket in Pocket Room: The point of this room, which is a fully decked out living room from the book, is to listen to the narrator describe funny things around the room. Strangely enough, we don’t get any actual wockets in pockets. There is a Nink in the Sink, and things like that. Kids can run around to try to find what is being described, and some of the items are interactive, like the books on the bookshelf or various cabinet drawers. Not a whole lot to do here, but the aesthetic is nice, and a sofa you can sit on with a Bofa, so that is fun.

Did I Ever Tell You How Lucky You Are Room: This is a room that is likely the most interactive. There are three-four elements that one can interactive. A random device on the wall that you can put balls through that will split them back out. A device that makes some balls float. A wall with gears on it that you can take off and rearrange and still gear them. And some big car thing, that is supposed to do something, but didn’t do anything in when we were there. When they told our kids they can remove the gears, my youngest picked up a decoration gear on another wall, and thought it was okay. They definitely panicked about that.

Although there is multiple interactions in this room, this book itself is such a weird one to pick given other famous Seuss books that were ignored. I haven’t read this in awhile, so I don’t remember how the objects in this one actually related to the book. Hopefully they did. But thematically, this one screamed out the weakest theme . 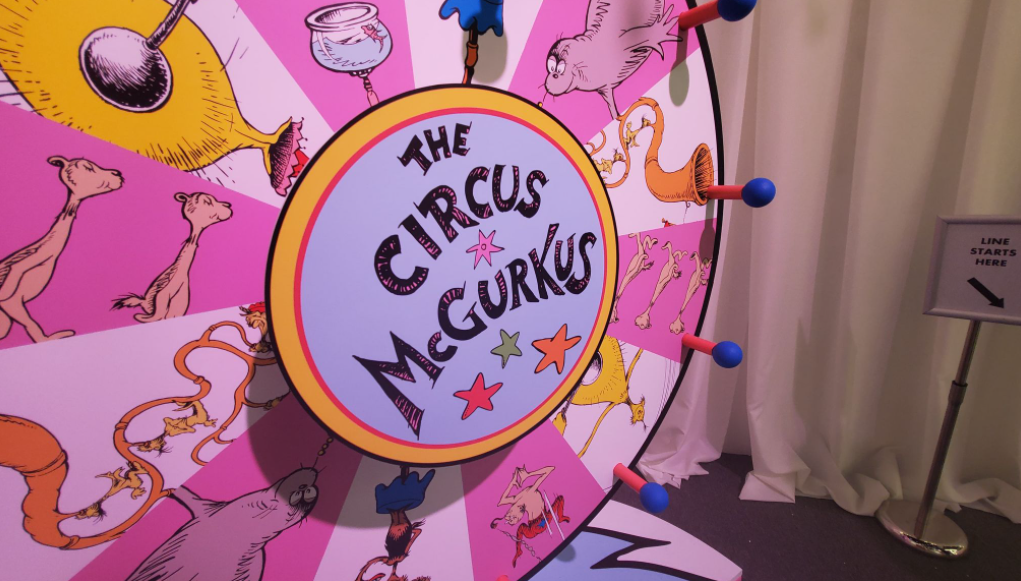 I’ve seen people riot over getting a chance to spin a wheel.

Cat in the Hat Room: That’s right. The Cat in the Hat room is bad. It has decorations all around it on the side, books and stools and tables on top of each other and placed in a way to be clearly a decoration. We have a Cat in the Hat in the corner, as a decoration, and an animated fish in a bowl who talks occasionally. The attendant told us to make a mess, it is okay, and all that meant is to take some colorful handkerchiefs and throw them around. There were two large boxes in the middle that would shoot up air when the attendant hit a button, so you could throw them up on it, and…that was it.

Like, there is nothing else to do. A room with a border that didn’t have interactions, and talking fish cartoon, and place to throw around handkerchiefs. I can see photos on their site of that room with people moving around stools/books/etc but that was definitely not something happening in my experience. What a waste.

Horton Hears a Who Room:  The room here looks great, and can be fun to crawl around in. It has these plant/bushes all around so they could crawl through them. The point of the room is to listen for the Who, and find them, a whisper or a faint sound.

I have no idea if that room even worked. We looked for awhile, as did another family, and got nothing. The attendant said that the voice changes where its coming from every once in awhile as well, so she didn’t know where it would be. But after five or so minutes, this is a lot of effort for zero payout. (If we heard the whisper, it would have not felt worth it either).

Sneeches Room: The biggest let down by far. We were excited for Sneeches. And what we got was a room with, maybe up to 20 Sneeches? Probably less. But with nothing to do in those rooms. When you enter, you can go in a 6 ft by 6 ft square roughly, one of those plastic barriers, with the Sneeches around you. And then they just have mirrors on all the walls and behind you. So it looks like there is a lot of Sneeches. If you arms are long, and take bad pictures because of the mirrors, and then you will be disappointed and leave. 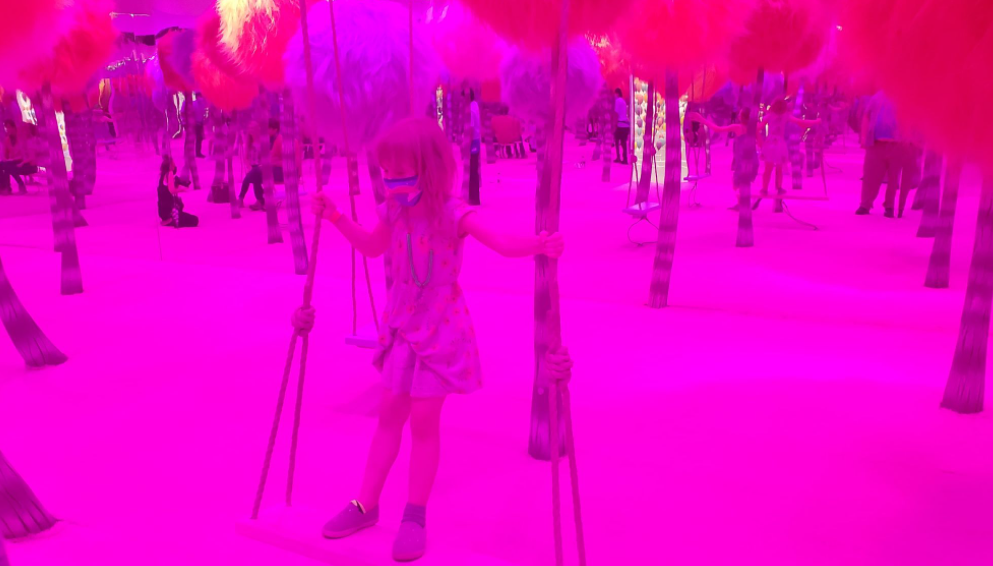 Why did the Onceler have to mess this place up?

Overall, the only thing to point out is that this exhibit should have Dr. Seuss characters show up in costumes to interact with the youth and families. I could tell from the pictures it should be at least Cat in the Hat and Thing 1/2, but they also said Grinch and Lorax!

My family was there for almost two hours, and in the first 30 minutes we got to see The Lorax, and after that, nothing else. That is extremely disappointing. How long would one have to wait for these guys for pictures? The site says it should only take about an hour to experience it all, but to take your time. You’d expect this to be part of the experience. How long do you have to wait to get to see a Grinch for pictures? It was another aspect that left us disappointed.

Also the gift shop was very odd, as nothing had prices on it, which is a pretty scummy tactic, making us go back to ask for specific item prices and let our kids know that things are marked up so high.

This was an overall okay experience. But I got to go into it for free, and have my parking paid for. If I had to pay for it, I would likely be furious by this whole thing. More than $30 for an adult ticket is ridiculous, with a kids ticket being somewhere in the $20s. It’s not ridiculously expensive, but it is more expensive than the value gained from the experience. Don’t even bother with a VIP experience ticket. All of my experiences with this had limited number of people in each rooms, so I am not sure how much more limited it would allow, since they are keeping people allowed in low for COVID reasons right now. 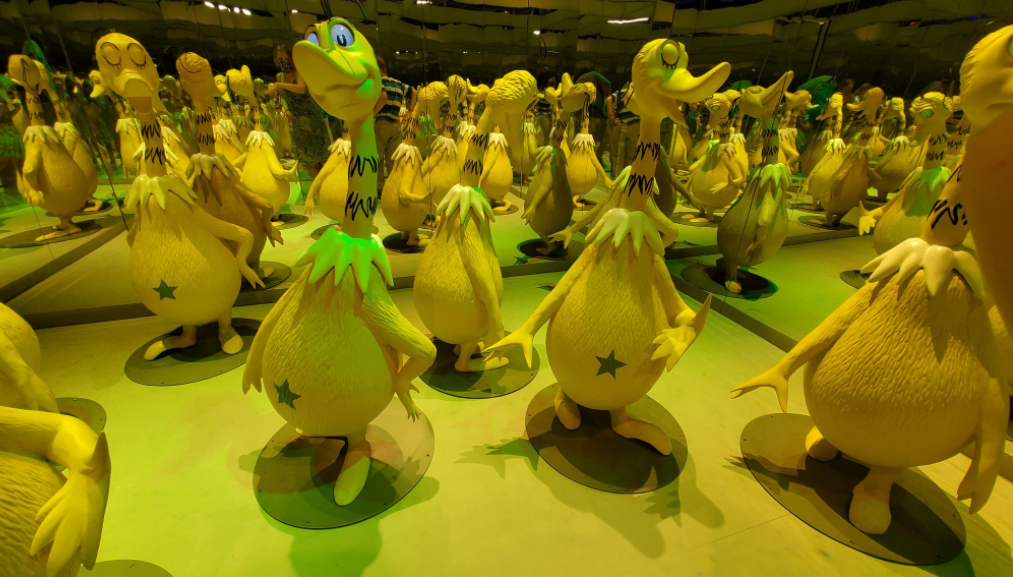