Being a prodigy can be a blessing and a curse. Being a prodigy means that sure, you have talent in something, something that is notable enough for people to care about. And they have to be really good at it, earlier than most other people are doing those same talents.

Being a prodigy means you can get fame from just being good at an early age, even if you are never the best. Because you are young, you are special, and people will take note. This can lead to later opportunities in your life as well, just from publicity and inherent fame.

And then there are the bad sides. By being a prodigy, people will talk about privilege. They will talk about being a gimmick and maybe even attack you for not being the best. “Sure, they can tap dance at one, but I’ve seen better!” And then there is the aspect of not living up to your own name. If you are seen as a wunderkind and eventually struggle or don’t reach the next step, you will be seen as a failure, a false prophet, and everything may leave you. There is a ton of pressure to keep going strong and they can get burned out. And if they don’t reach the levels people said they would, they can become depressed and lead into a tailspin.

That’s why I can take solace in my own mediocrity.

And the documentary Chef Flynn is about a kid who just really wanted to be a fancy chef, and put his whole young life into it. 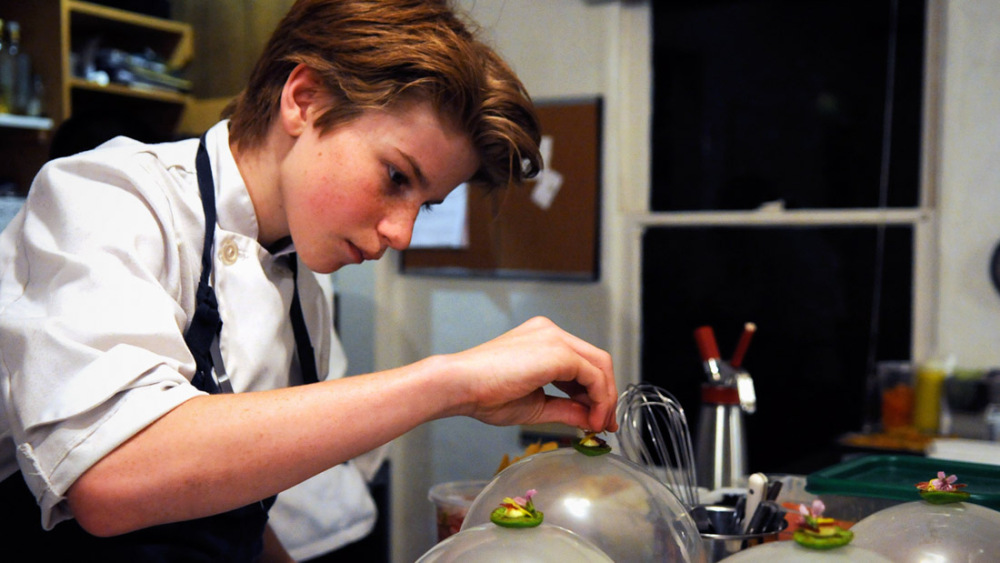 You can tell he is a chef from his outfit.

Flynn grew up like a lot of kids, with separated parents, some siblings, and generally enough food to eat. His mom was a small time director/actress and so she spent a lot of time with cameras and filming her own family. And what she didn’t spend a lot of time doing is cooking varied meals. A lot of ordering in, and a lot of easy meals for dinner, and she was struggling. So Flynn at a young age knew he needed to help and wanted to work on the food aspects.

And work he did. He started getting really fancy with his food making, going into huge specialties, trying and experimenting and caring about plating. This grew into his own kitchen at home, to his small in home restaurant for friends and family, to bigger and bigger opportunities. And as already discussed, with bigger opportunities comes bigger scorn. For every magazine article or cover, comes anger and meanie butt heads.

This documentary is a lot more on that. On a young man dealing with the stresses of the worlds placed on him, and his attempts to overcome it, while maintaining some good relationship with his family.

Sure, it shows how he got to this point, and at the time of the end of the documentary, he was an adult. Living on his own, trying to start a restaurant and doing it now without his mom’s help.

Chef Flynn is an interesting tale about a cool kid and his mom, but it isn’t going to be a life changing documentary. It could maybe inspire someone to go out and chase their own dreams, but this didn’t seem to be the point. This documentary is overall just a fluff piece. And yes, it is interesting, but probably best watched by people who enjoy cooking or young people being successful. Or you know, a nice documentary to potentially cheer you up.