It took awhile, but You’re Next is finally in theaters. Originally premiering in a film festival in 2011, for some strange reason it took two years to hit theaters.

Maybe in 2011, the world wasn’t ready for a movie like this. Maybe we needed the Scary Movie franchise to officially drive itself into the ground before people were willing to accept a horror movie with comedic elements in it. Or they made dozens of changes and had legal issues to deal with. Who is to say, really? 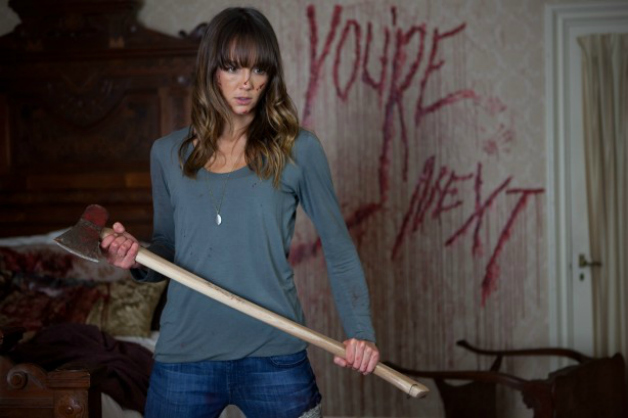 Blood is the new make up.

Paul (Rob Moran) and Aubrey (Barbara Crampton) are about to celebrate their 35th Wedding Anniversary. They also just happen to be rich. Paul used to work for a defense contractor, so he left the company with a very snazzy severance package, and now they live in the lap of luxury. They decide to host their entire family to a nice dinner in a mansion in the middle of the nowhere. Because that is what rich people do.

Usually the 35th anniversary is coral/jade, not gore and violence. Oh well, the times they are a changing.

They also have four children, all in relationships. That just means there are plenty of people who can die. The main son is Crispian (AJ Bowen) with his girlfriend Erin (Sharni Vinson). He often butts heads with his younger brother Drake (Joe Swanberg) and Drake’s wife, Kelly (Margaret Laney). There is also the only sister, Aimee (Amy Seimetz) with her film making boyfriend Tariq (Ti West), and the youngest son Felix (Nicholas Tucci) with his girlfriend Zee (Wendy Glenn).

During dinner, an argument breaks out. Then suddenly, one of our poor house guests finds a crossbow bolt through their head. Ouchies.

Panic ensures, as bolts continue to rain into the dinner room. The family knows only one thing. People are outside (and maybe even inside) the house and looking to kill them. They don’t know why or who set it up. What the three masked killers did not know, is that Erin grew up on a survivalist reservation until she was 15, so she knows how to handle herself in emergency or life threatening situations.

Yep, looks like we have an blood bath on our hands. 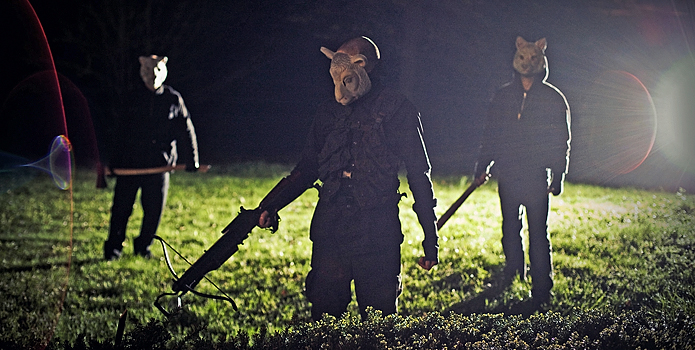 Animal masks haven’t been cool since the 70’s. They’re bringing ’em back.

The weird thing about calling You’re Next a comedy/horror film is that it is not a parody or a spoof. I’d say that You’re Next is unique, and almost its own new genre of film.

Don’t get me wrong, there is a lot of death, a lot of gore, and a lot of creative deaths. It is just that some of the deaths happen to be humorous. The banter between brothers is humorous. The inability for certain characters to die (and instead just get hurt over and over) is humorous.

If you have never heard the song Lookin’ for the Magic by the Dwight Twilley Band from 1977, then you will find it stuck in your head by the end of the film. Who says upbeat music can’t be in horror?

What I enjoyed most about this film is that I really couldn’t guess what would happen next, and believe me I tried. I would say I had a 30% success rate at actually predicting how certain characters would die, what the traps would do, and who was responsible for it all.

The movie itself isn’t too long and it doesn’t take itself too seriously. It is doubtful you will recognize any of the cast members from other acting roles. The brother Drake was great, and our leading lady Erin was incredible. It is refreshing to see such a BAMF actress kick so much butt. I could be wrong, but I think only one character actually fell down while being chased, a normally overused horror staple.

You’re Next might not scare everyone, but I think it is a refreshing take on the genre, with high levels of slasher and gore thrown into the mix. Above all else, it is certainly entertaining.