I haven’t played it, because the idea of playing a game to be scared is on my nope nope list, but I guess Five Nights at Freddy’s is a game about surviving animatronic robots? Things that come alive at night and want to kill?

Nice. A solid topic. Simpsons did it.

And it looks like that before a movie could come out to take advantage of its popularity, Wally’s Wonderland came out first to soak it all in. Did it steal the idea? Probably not. Killer robots in a kids store aren’t exactly new. But in terms of films, it is always good to be first.

I did go in reluctantly to this, because although the idea sounds great, these Nicolas Cage movies that keep getting hyped by the internet keep also disappointing me, so it is hard to really trust again. 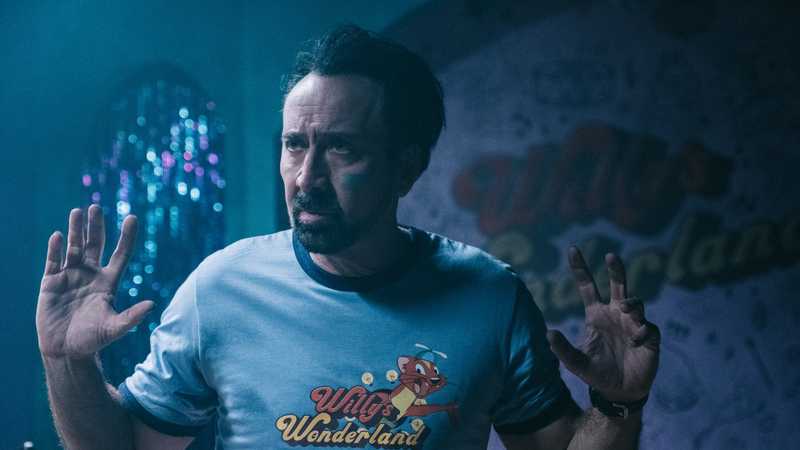 Best employee, hands down. Or, hands up?

This guy (Nicolas Cage) was cruising along, living his life, when his tires go flat and he has car problems. He gets a tow from the local small town, that can probably work over night and get him out the next day, but they are a cash only business. If he is willing to work, someone else might pay his debt though.

This guy is introduced to Tex Macadoo (Ric Reitz), the owner of Wally’s Wonderland. A pizza party restaurant with animatronics. Apparently he is a new owner and needs it cleaned out inside, and if this guy works on it he will pay for his car damage. Sure. Especially if it comes with beer and breaks on the pinball machine.

But sure enough, this is just a plot to make him a sacrifice, as these animatronics will come to live and are here to kill. 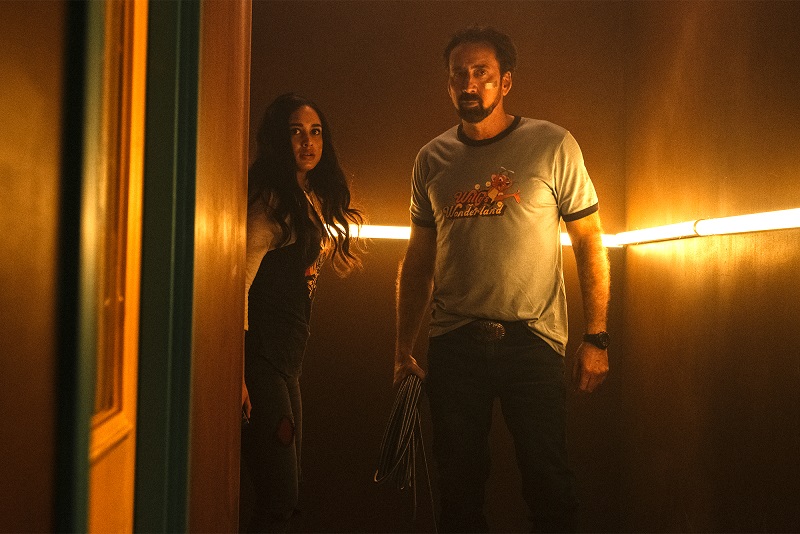 You thought I’d show you a killer robot in these photos? Disappointment!

I had low expectations going into Wally’s Wonderland, but honestly, this one surpassed them. I wouldn’t say it is still an overall great film, but it certainly has entertainment  value and it made some good decisions.

A lot of films that dump exposition on the viewer with a backstory or flashback usually do it poorly. This film does the same thing, and doesn’t do it in any unique way, but it seems to fit the style really well and I find it all acceptable.

Cage plays one of those silent but deadly roles in the film and I am happy that he keeps up the act the entire time, and they don’t ruin it with some monologue near the end. He is quick to act, but also quick to make sure he gets his self care in. If you don’t treat your own self, then who will?

Despite being a bit of a fun ride, the film didn’t really give many twists or turns. It was really straightforward. Despite the large number of robotic singing killers, the fight scenes were not done too creatively. Most of the robots when fighting Cage also apparently lose any tactics they have. One robot easily kills a teenager with a repeatable ranged attack, and it doesn’t really attempt it on Cage ever despite knowing he has destroyed the others. They don’t just appear in the dark either for sudden surprise bites and cuts.

The people who are interested in this plot will get exactly what they want from this movie and shouldn’t be disappointed. Cage is cage. Mayhem is mayhem. And creepy happy birthday bots really should be destroyed.