When I first saw the trailer for The Wolfman, I assumed it would be like all of the old werewolf movies, with nothing really new behind it.

Then I realized I hadn’t really seen any actual older werewolf movies, just a bunch of dumb cheesy ones. Looks like I should give the Wolfman a try! 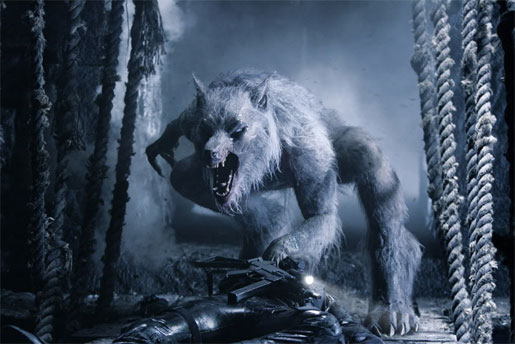 Alright, so maybe my only werewolf movies are Underworld, Van Helsing, and Harry Potter 3. Sue me.
And yes, I will ignore that other one I just reviewed.

The movie stars Benicio Del Toro, a Shakespearean actor who is sent back to his home for his brothers funeral. Some people think it is from the trained dancing bear that the gypsies had (err) and others think a Werewolf (equally implausible, I guess). Wanting to get some answers himself, he goes to the gypsy camp where he is of course hurt by a werewolf, gaining its curse. Now he has to both try and live with his curse, and try to stop the man who killed his brother. His dad is played by Anthony Hopkins, his brother’s lover is Emily Blunt, and Huge Friggan Weaving busts out the mutton chops for a detective role.

The acting in this movie is fantastic. While watching it though I had no idea why a werewolf would go on a crazy rage killing spree. I always figured it was just for food, but it seemed like the werewolves were killing just for killing sake. It could also be explained by people shooting at them, but eh. Who knows.

The special effects and make up were pretty top notch. Makes sense that the film won best make up. I loved the scenery and music too. Not to mention Hugo’s mutton chops.

But overall I thought it was still lacking. Maybe it was the ending, wasn’t my favorite. Didn’t care about the main dude that much either. Probably because I am heartless, but he went for his brothers widow pretty damn quick. Predictable stuff happened also. But the asylum was also pretty damn cool. But still lacking. 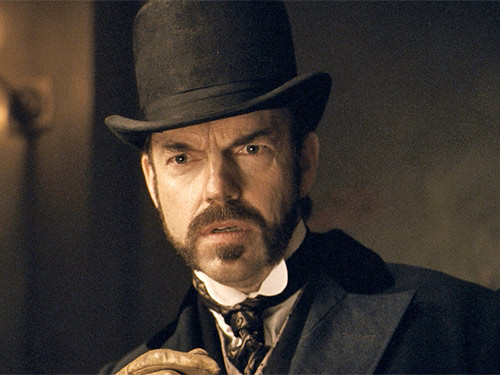 Did I mention Hugo’s mutton chops yet? They’re kind of a big deal.
2 out of 4.
Tags:2 out of 4, Action, Anthony Hopkins, Benicio Del Toro, Drama, Emily Blunt, Hugo Weaving, The Wolfman