Why hello Spiderwick Chronicles. Good news, there are zero spiders in this movie! Which was my biggest worry. All I knew this was some fantasy kids movie, based off some book series no one has heard about. 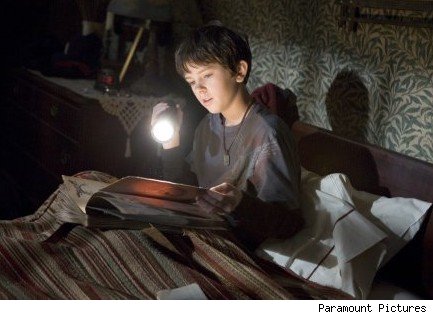 Maybe because it only comes in giant hardback, with old pages and is bound by a spell?

The story involves Mary-Louise Parker and her 3 children moving into an old house in the woods, thanks to divorce! It used to belong their great aunt, but she is in crazyland now. The twins are played by Freddie Highmore, who was Charlie in Charlie and the Chocolate Factory. One of the twins was all rawr Divorce and angry, the other is a smart pacifist. Anyways, rambuctions twin discovers a book of fairies.

Now, for some reason, if this book about fairies (made by Spiderwick. They are his Chronicles) gets taken by Goblins, everyone will die. Some plot points were awkward. Like them trying to destroy the book, instead of Goblins. I mean, what? A great book of knowledge, and they just wanted to end it?

Nick Nolte plays the Ogre shape shifter king of the Goblins dude, while voices are provided by Seth Rogen (a hobgoblin) and Martin Short (I dunno? A House Elf or something?). Seth Rogen just likes voice acting now, with Monsters vs Aliens and Paul.

So overall, the story was interesting though. Of course no idea how it is to the books, but who cares? The CGI seemed to only be creature based, which is nice. I liked the look of the goblins. Kinda cute in a rawrawrawrgnashgnash kind of way. 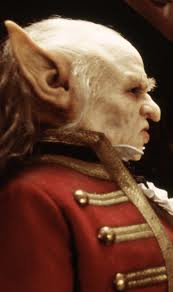 “You must pay the troll’s toll if you want to get into this boy’s soul!”
2 out of 4.
Tags:2 out of 4, Fantasy, Freddie Highmore, Martin Short, Mary-Louise Parker, Nick Nolte, Seth Rogen, The Spiderwick Chronicles