I have found writing this review very hard. Not because I don’t have a lot to say, I have tons. I just…don’t know how to say it. So it will probably seem to be a dumb review overall, which is unfortunate for such a great movie.

The Illusionist should not be confused with the Edward Norton movie of the same name. It is an animated french film, that takes place in Scotland. Aside from being animated, 95% of the film is silent speaking wise, focusing more on music and pantomime. The speaking that does take place in the movie is French or Gibberish, or both. I am not entirely sure.

To call this a simple film is an understatement. The animation gives an old vibe to it, but it is beautiful at the same time. It is like the background of an old cartoon, where everything is kind of faded, but you know what is about to be interacted with as it has a different glow to it. Except in this movie, the background and people all seem to be the same. 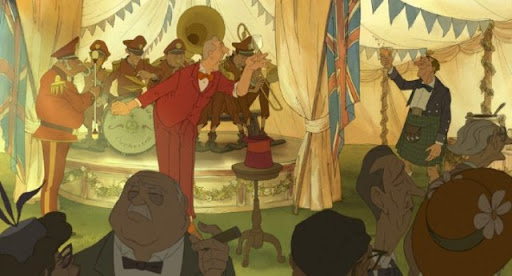 Your face is all the same.

The story tells of an old Illusionist who is traveling across Scotland, performing simple parlor tricks for money just to travel on further. Eventually he meets a young girl at a Parlor, who believes his magic tricks to be real and follows him on his journey. She lives with him in some city while he gets an agent and a local gig at a theater. The relationship with the girl is like a father/daughter thing, not something creepy, jerks. The remainder of the story shows as he tries to make it through his life with magic, in a world that doesn’t seem to care anymore.

The film itself is pretty short, ending right under 80 minutes. To me it went by very quick, and I was surprised as it was about to end. The ending scenes were very sad, possibly depressing, but “real”. I had no idea I was going to, but I definitely shed tears, seemingly out of no where.

There is only a few characters, but it is interesting how they all change in such a simple animated movie. I went from confused about the girl, to upset, to angry, to confused. There is some other performers here too, a trio of acrobats, a ventriloquist, and an old clown. I cannot say I know anything about the original author of the movie, just that I know it is some 50 year old script that finally got produced. It was a pretty famous French dude.

Finally, the bunny. The Illusionist has a pet bunny, and from the animation style point, I think its the cutest bunny I have ever seen. The way it runs around, gets irritated. Every time it was in a scene, an instant “awww’ would just fill my head. 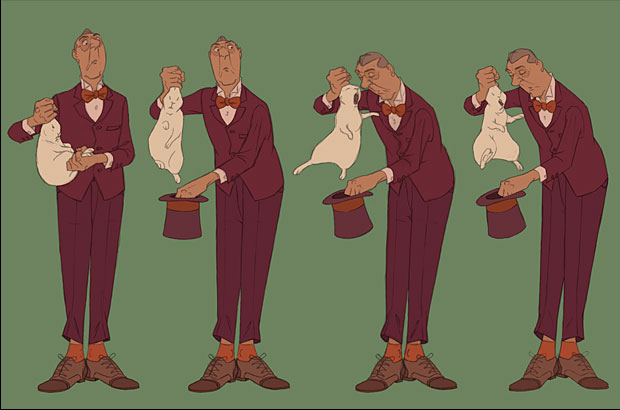 Look at him squirm. Don’t you just want to hug it? If I could, I would own a bunny like that. Too bad animations can’t exist in our 3D world. Yet.

I found this movie to be incredibly touching, and that is without knowing the probable dozens of hidden messages throughout, that the original script writer was probably trying to deduce. If you ever get a chance, you should just definitely give it a try. It went up against Toy Story 3 and How To Train Your Dragon for Best Animated Picture, and after seeing all three, I fully believe this should have won.