I don’t hate Sacha Baron Cohen as an actor, I think he can be amazing. He just lets himself get into a lot of shitty roles. He still always gives it his all.

The Brothers Grimsby is one of those shitty roles. I didn’t really know what it was about. But it did have a bit of genius advertisement campaign.

It went on Jimmy Kimmel Live! to show a clip, but made sure to show a clip that could not be shown on TV. A gross, over the top, cringey clip. But since it couldn’t be shown, instead they just showed the audience flipping their shit. Of course that went rival, and hey, probably more people went to see the movie. Good job PR company. 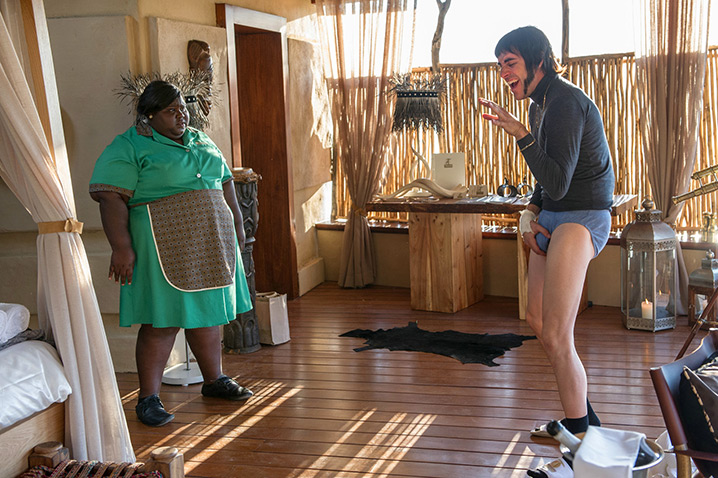 Nobby (Sacha Baron Cohen) is a simple man living in the small town of Grimsby. He has a wife (Rebel Wilson), 11 kids, and an empty room. The room is for his brother, Sebastian (Mark Strong). A long long time ago they were separated thanks to the foster system, but Nobby knew that one day he would meet his brother again, and damn it, he needed a room for him.

Nobby likes to drink, watch football, and party. But then he finds out the location of his brother! He has to go to a big charity event to find him, but when he does he gives him the biggest of brotherly hugs. This causes Sebastian, a trained government assassin, to kill the wrong target and get himself into noodles of trouble.

Now Sebastian has to go on the run, while dealing with his incompetent brother. His brother being there is also his saving grace, because no one knows he exists, so it gives him a place to hide and let all of this blow over.

Want to know what the gross scene was that they showed the audience? Fine. Strong and Cohen climb into the vagina of an Elephant to hide from pursuers. While hiding, a male elephant decides to go for it and so they are crammed in there, with a large elephant penis coming in an out. Cohen knows it can last for hours, so they actively try to help the penis ejaculate to make it end. And it of course ends with elephant semen. But wait, there ends up being a huge line of elephants ready to jump on, giving them hours of cramped in a vagina, ejaculating elephants fun.

Okay so typed out that is terrible. Watching it is gross (but don’t worry, it doesn’t look incredibly realistic, it just looks stupid and a little gross). Having gross scenes in a movie does not make the movie terrible, being overall terrible and unfunny does that.

There are quite a few “outlandish” scenes in the film that will make an ordinary viewer just want to turn it off. A very long joke about sucking out venom out of a penis. The first picture alludes to the seduction of a woman who doesn’t have the normal standard of beauty. Jokes about AIDS and Trump (before it was fashionable, still dumb jokes) and of course a very weak plot line.

There is just nothing amusing or remotely interesting in this film. Cohen is over the top, he is always over the top, but the film is shit and really can hopefully be easily forgotten from my existence. After I finish typing up my worst of the year list.