Few people are lucky enough to have a film be made on their life. For the most part, they have to wait til they are both dead and a decade or so after they kick the bucket. Obviously, some people wait hundreds of years, because they are old famous people and movies weren’t a thing in the 1600s.

Steve Jobs is a luckier than most men (outside of the being dead from Cancer thing). He had two movies about his life in the last two years! And he only died four years ago! Not only does he have Jobs and now Steve Jobs, he also had quite a few documentaries.

It is clear that Steve was a living legend who had tons of stories about him. It is true that he was a flawed character with a lot of issues, problems, and broken friendships. But he also did a lot of good things, so this makes him an interesting character for people to want to see.

Now, this movie was delayed for awhile. Blame Ashton Kutcher. But at a time, this was supposed to be directed by David Fincher and starring Christian Bale. The script was always Aaron Sorkin I believe. 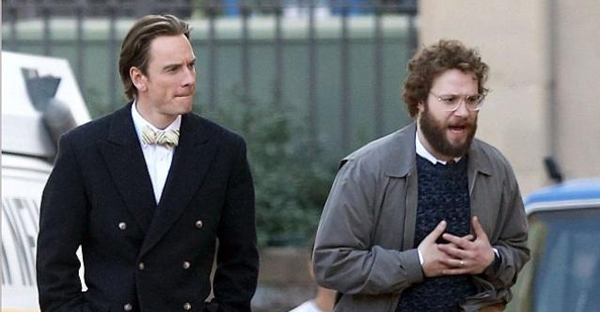 I believe that Seth Rogen can play a character who doesn’t get high at all. I believe it so much.

1984. 1988. 1998. These 3 years were some of the most pivotal in Steve Jobs’ (Michael Fassbender) life. There were tons of big moments before and after of course. Before that he helped build a computer with Steve Wozniak (Seth Rogen) and helped create Apple into a powerhouse corporation. There was the failed computer the Lisa. After 1998 he introduce the iPod and the iPhone, crazy popular Apple products in our current era.

But in 1984 he was about to introduce the Macintosh computer, after the best Super Bowl Ad ever. Sure he came to the team late, but he is a visionary damn it. In 1988 he was going to release the NEXT computer, a perfect cube, away from Apple due to the falling out after the Macintosh. And in 1998, his triumphant return to Apple, about to release the iMac computer. He wanted to make the products sexy again. That may have been a line from Jobs, whoops.

Each setting of the film, each roughly the same length in time, takes place the the minutes before his press conference, with all the drama and tension of his life coming together to fuck with him. That includes Chrisann Brennan (Katherine Waterston), a former lover who always needs more money from him, to take care of the daughter he originally doesn’t claim to be his. It also involves an Apple CEO, John Sculley (Jeff Daniels). There is Andy Hertzfeld (Michael Stuhlbarg), one of the better computer engineers, and Avie Tevanian (Adam Shapiro) a different engineer. His ever faithful assistant/planner Joanna Hoffman (Kate Winslet), a tech reporter (John Ortiz), and of course his daughter, Lisa (Makenzie Moss, Ripley Sobo, Perla Haney-Jardine).

I didn’t remention Wozniak, but he is totally hanging around each time too. But I kept the above vague so you could hear the major players but not the many of their plot lines. Because I care and I am not an asshole CEO, like some people. 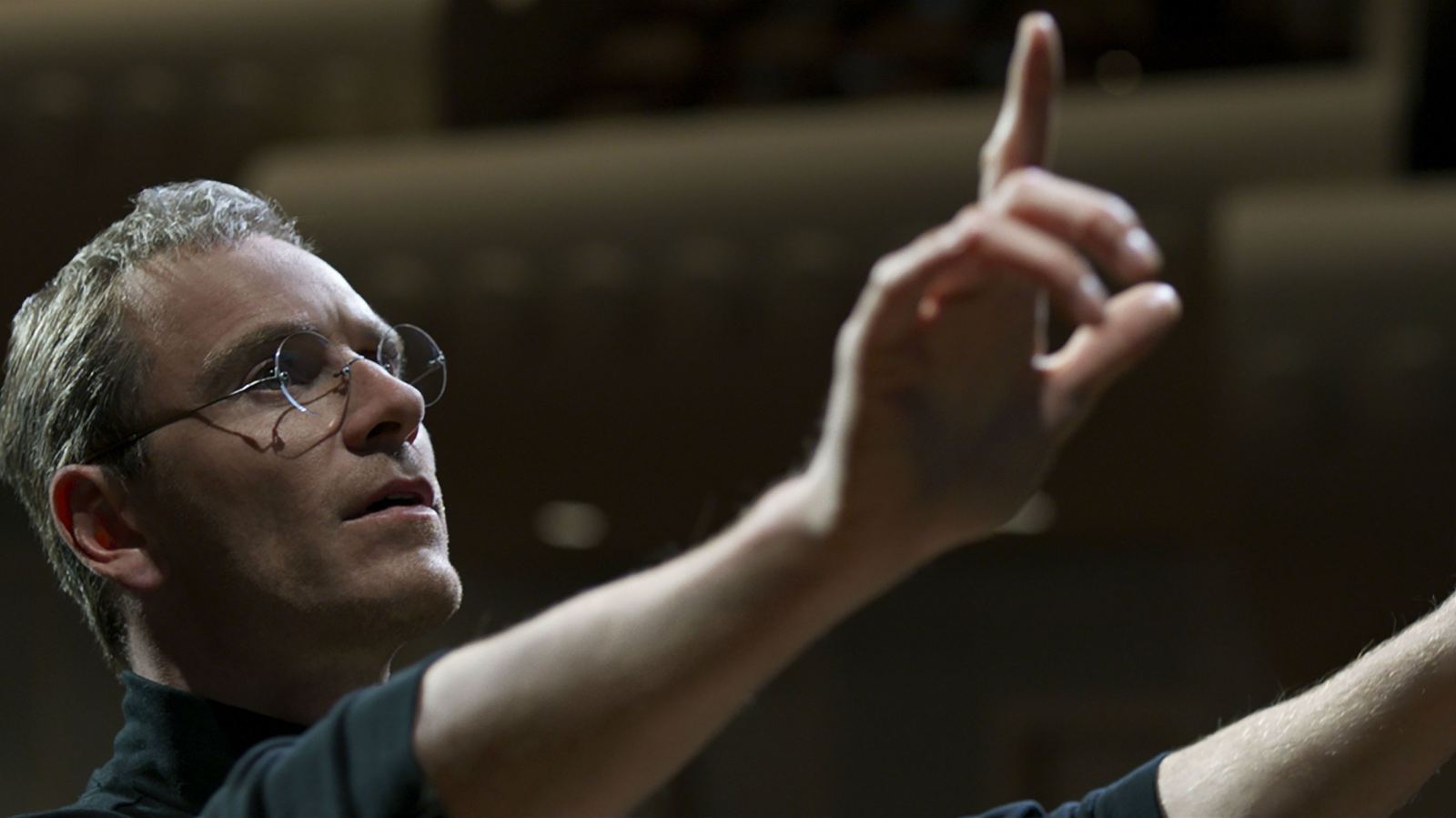 “How big is my metaphorical penis you ask?”

I am a big fan of Sorkin’s writing. The dialogue between characters is often quick and forces me to stay on my toes. Several times in the film, standing on my toes didn’t seem to be good enough. The conversations at point were so rapid fire that I practically had to dance to avoid the bullets from striking my legs, like a western stereotype. I think that metaphor works, if not, re-read it and think harder. The best way to describe some of these scenes would be an intense action fight, with words as bullets. I rarely feel that tense during a drama, let alone a biography.

The acting was definitely on point in this film. This is some of Rogen’s best work. Daniels had one majorly great scene with Fassbender. Stuhlbarg? I don’t know anything about Stuhlbarg, but he did a great job. I didn’t even recognize Winslet the whole film, that’s how in character and different she was. And of course, Fassbender. Early on, it just looked like Fassbender acting in a film, but somehow during the movie, he transformed so fully into Steve Jobs that I couldn’t remember who was the main actor. Of course by the end he looks so much like Jobs that it is easy, but I am talking before that, when he still had longer hair. He nailed the shit out of the role.

For comparison sakes, Kutcher did a great job as Jobs too. He had a walk, he went fully into character, but I usually thought it was still just Kutcher. But Fassbender still did a better job. And besides, I saw Fassbender’s penis in that one movie, so for most comparisons he is sure to win.

A lot of this is highly fabricated. The plot lines are real, but there is no way the timing worked for most of this. Regardless, where it excelled was how true to life they made his character. Jobs was egotistical, a know-it-all-, an asshole and a dick. He wasn’t the most pleasant person to work with and that all came across in the film. This wasn’t some fluff piece. This just tried to present the man behind the myth, flaws and perfections and everything in between.

One final comparison: This is not as good as The Social Network. Sorkin is the common link between the two, and the fact that they are both based on real people. I am not saying Fincher is the reason and that Danny Boyle could not pull off a better movie. It was fine, and even if Fincher directed this it probably wouldn’t have been as good. Just don’t go in expecting that and you should enjoy the show.