The first time I heard about this movie was in the summer. I knew it was based off of an ad found in a paper at someplace in time. What did it say?

Wanted: Somebody to go back in time with me. This is not a joke. P.O. Box 322, Oakview, CA 93022. You’ll get paid after we get back. Must bring your own weapons. Safety not guaranteed. I have only done this once before.

Nice! Turns out it was a joke made by the paper people to fill up some space, but it has built up enough interest that they made up a movie based on that exact plot line. Hooray for screen writers, I guess! Unless Safety Not Guaranteed is not a good movie, then boo screen writers, boo!

The best way to increase safety is to buy a reliable vehicle, with air bags and child locks.

Out in the heartland of Seattle, there exists a magazine. Which one? I don’t remember. But on the magazine, there are workers. Namely, Darius (Aubrey Plaza), a mid 20s girl who has no direction in her life, and just does whatever. But when a Jeff (Jake Johnson) gets the idea to find out the person who wrote the ad and do a story on them, he somehow gets it approved. He gets to bring along two interns, Darius and Arnau (Karan Soni), a biology student just wanting to diversify his resume.

But when they get to the area, they find him quite hard to find. Eventually though tactful spying, they find Kenneth (Mark Duplass), a grocery clerk with a big dream. But he doesn’t trust people. So Jeff fucks up at the start, and Kenneth won’t talk to him. It is up to Darius to pretend to be interested in going back in time (“pretend”) and get close enough to him for information.

But is the man a genius or just crazy? He claims government agents are after him, he wants to go back and prevent the death of a girlfriend, and he swears he has done it before. But no one knows if he is lying. 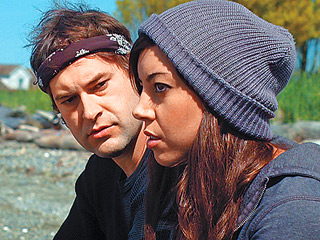 With a budget of about 10 dollars, the first thing you might notice is that three of the four main characters are all from current TV shows, that’s nifty. None of which have ever been given a leading role in a movie before. Mark Duplass and Jake Johnson I see in movies, but always as minor characters. Aubrey Plaza has had some slightly better than minor roles in movies, her biggest probably being in Funny People.

I think it is incredible how much they did with really so little. They turned a joke newspaper ad into a story about finding yourself and learning to live. I didn’t think it was rolling on the floor hilarious or anything, but it was definitely enjoyable to watch.