Our Idiot Brother, or “that movie where Paul Rudd has a beard and long hair” can somewhat be compared to Hesher.

Why? Because the main characters both have long hair, when normally they don’t have long hair. Outside of the head situation, movies are quite different though. 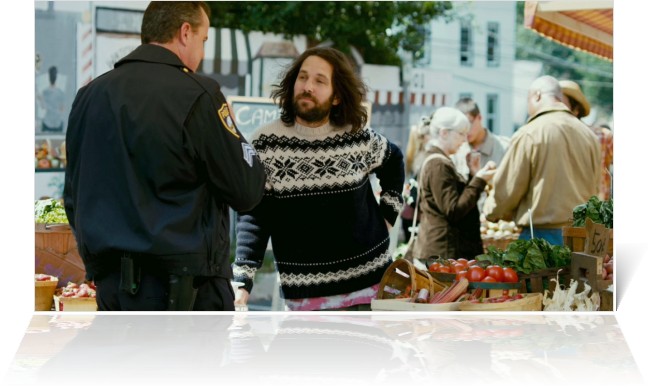 The movie begins with Paul Rudd being PUT IN JAIL! For selling pot. But he is a friendly guy. He got out of jail pretty early. See, he isn’t an “idiot”. He just assumes the best out of everyone. Why would people want to screw him over?

Enter his sisters. Liz (Emily Mortimer), the oldest, married to Steve Coogan, a documentary maker. Then there is Miranda (Elizabeth Banks, who looks way too much like Parker Posey), writer for some sort of magazine! Has a neighbor too, Adam Scott, and she is very bossy. And last he has Zooey Deschanel, hippy sexual sister, living with like, seven roommates and currently lesbianing it up with Rashida Jones (who is the “more successful stern” lesbian).

After being released from prison, he is kicked out of his old home, and lives with the different members of his family. Of course while he does, he “Accidentally screws everything up” by doing the right thing, trying to make everyone happy, and believing other people to honest / not so cynical. So more or less, he is just a good free spirit, who doesn’t think the world is out to get him.

And that’s the movie. By the end they all love each other and have their lives fixed (and in better standing) than before, and then they do a giant disco party. 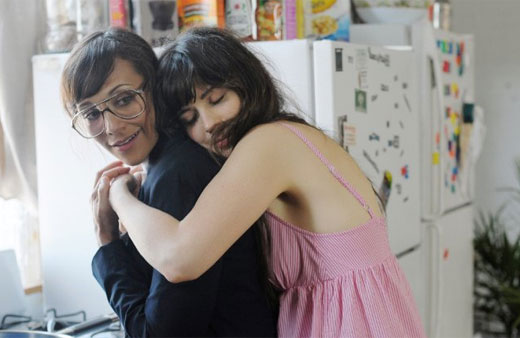 Hah! No disco party. Sorry. But here is Zooey and Rashida.

It was an enjoyable movie, but I thought it could have been a lot better. Not sure if I will ever watch it again, but glad I got to see it at least once. Paul was great in this role, pretty different than his normally “ahhh everything so stressful!” roles. His character does crack near the end, and it was great. The sisters all had good chemistry with each other and him, and it actually felt like a family.