When I put Kon-Tiki in my Blu-Ray player, I found out that Norway is a cocky country. Look at this picture. I took it myself. (No it is not my penis).

I won’t describe it because I want you to see it. But Damn, that is some serious ego shit. Who would do that to start a film? Someone who has too much pride in a language, I tell you what. 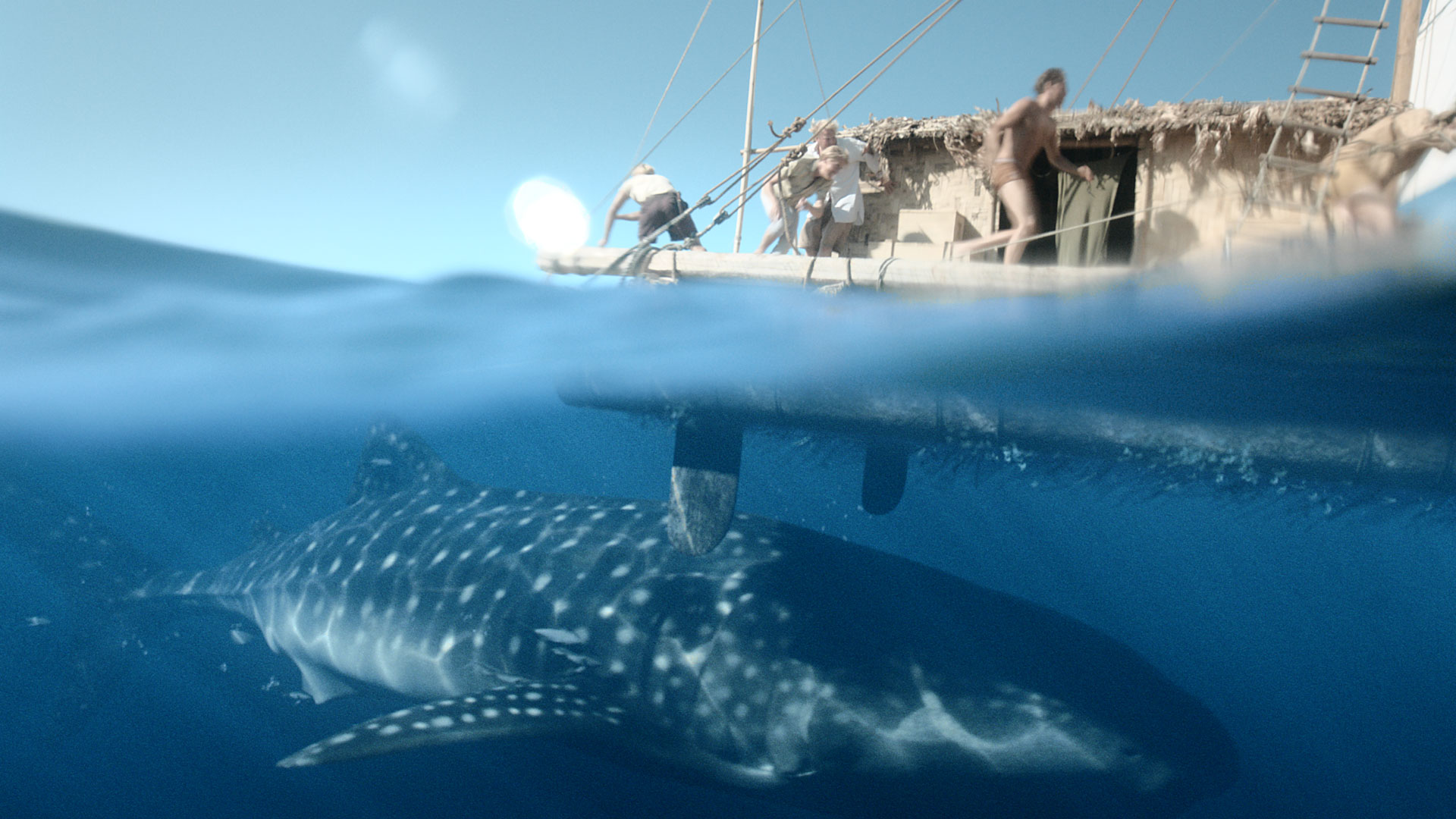 Or just pride in their original movie. Ohhhh, pretty.

Thor Heyerdahl (Pål Sverre Hagen), besides having a bad ass name, grew up to be a scientist. He is an ethnographer, so basically he helps figure out how humans moved throughout history, and where certain cultures evolved from. In a nutshell.

He has spent a long time in Polynesia, working on his theory that the culture came from South America. There are many similarities in statues, and they have a tale of a tribe who came from the sea. He has all this evidence! No one will publish his work, because no one would believe it. No way could primitive people have gone from Peru to Polynesia. No way. And he can’t prove that they could, either.

He decides to build a boat, calling it Kon-Tiki, and sailing the journey himself with a small crew, just as they would have built it 1500 years ago without the aid of technology. No, it will be strictly ancient. Can he make it across the ocean in a small raft, over three months? Yes.
Yes he can. Some of the other crew members were played by Anders Baasmo Christiansen, Tobias Santelmann, and Gustaf Skarsgård. Shit, those are all super Scandanavian. 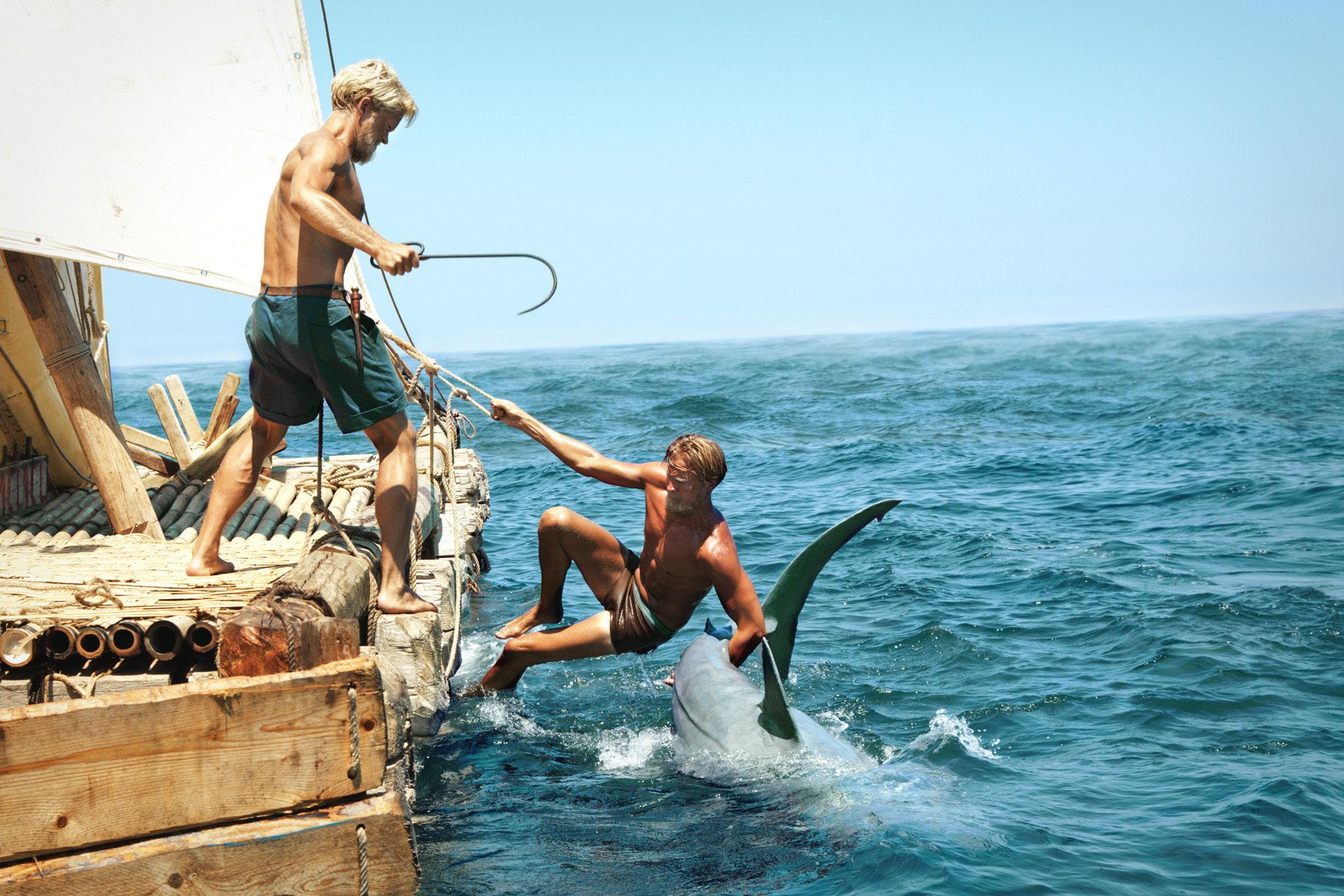 I haven’t seen this many bearded Norwegians since prom!

So I found out why the DVD menu went super egotistical and language-ist. The mother fucking Weinstein Company did it again. They cut out like, 17 minutes of the original movie for the English movie. What?

To make matters even worse, every scene that needed it was filmed in both Norwegian and English, so that they could release the same thing in both places. They are identical. It isn’t bullshit dubbing. The words that come out of their mouth are English. So yes, I watched it in English, not knowing that so much was cut out, and I just feel wronged.

It is the exact same thing they are going to do for Snowpiercer. They want to remove 20 minutes of material to make it so the people in “Iowa and Oklahoma” will go see it. Fuck you fuckers. They are calling Americans stupid. And I live in Iowa.

That all has nothing to do with this movie, but everything. Since I haven’t seen the Norwegian version, I really cannot compare.

What I can say is the version I watched felt lacking in some way. Sure, it was beautiful as fuck. Gorgeous. Well shot. Sexy almost. So many beards. But it wasn’t completely interesting. Their story basically paved the way for many adventurers back in the 50s, and probably helped inspire the journey to the moon. But their accomplishment isn’t as powerful feeling because we have already done crazier things to surpass it.

It is still an interesting and awe inspiring story. But not as exciting as I would have hoped.