If you are reading this and feel confused, don’t be. Yes, I had the nerve to post a fake review. You can read it here, and should. And I did it before. I did a fake review of Captain America: The Winter Soldier, with fake spoilers. Those were good times, before I had the ability to even see movies early.

But no, now I will really review God’s Not Dead 2. I had to pay money to see this one though. I had to go to a Thursday night screening, and thanks to soccer practice, I had to wait for the 10 pm showing. I had to watch previews and spend like $10, it was terrible.

Why? Well, I wanted to have some integrity in my fake review. If I made a fake review with just the trailer, I would have missed side plots and subtleties and you would have seen right through it. So instead I had to give myself just 3 hours of sleep that day and write a silly review for a silly joke holiday. But don’t worry. This is the real one. This one will pull out all the stops. 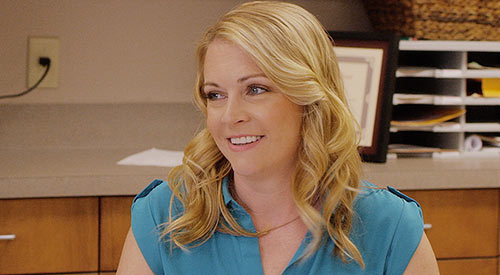 Yeah, you might want to wipe that grin away from your face.

GND2 takes place not only after the first film, but in the same basic location. Which turns out is Houston? In a made up high school instead of a made up college. The exploits of the first guy were heard large and wide, but Christianity was still being shunned.

Enter happy go lucky Grace (Melissa Joan Hart). Nothing gets her down except for not being able to help her students. Like Brooke (Hayley Orrantia), from an atheist family. She lost her brother six months ago and her parents (Maria Canals-Barrera, Carey Scott) seemed to have already gotten over it and are harassing her to get into a good college. So she goes to Grace outside of school to ask for help and she talks about Jesus. This is fine of course. Brooke also finds a bible in her brother’s room. He was secretly religious!

Later on at school, Grace is teaching about non violent protesters, MLK and Gandhi, and Brooke asks if it is similar to what Jesus spoke about. Non violence stuff. Sure. Why not. Brooke says yes, cites her source, and moves on. Some nameless kid apparently complains because later Grace has to meet with the school board over preaching in class! She refuses to apologize to avoid punishment, and they don’t want to fire her over it, but they decide to let the ACLU take her to court. They apparently really really want this battle.

The ACLU lawyer (Ray Wise) actually goes to Brooke’s parents to get them to be the main plantiff. Brooke is a minor so she has no say. They agree, because it might help her get into college. And now the ACLU can make an example of Grace, take her for everything she has and get a precedent about any Jesus talk in the classroom.

Also in this movie. Paul Kwo returns as a Chinese atheist turned Christian with many questions. David A.R. White is still a pastor who refuses to give his sermons to the government and serves on the jury. Benjamin A. Onyango is back, because fuck it. And Trisha LaFache is back as a reporter, with her cancer gone because she found Jesus. She doesn’t really have a purpose in this film at all.

We also have Robin Givens as the principal, Jesse Metcalfe as Grace’s lawyer who doesn’t believe either, Pat Boone as Grace’s old dad, Ernie Hudson as the judge, and Sadie Robertson as Brooke’s best friend and the niece of Trisha’s character. 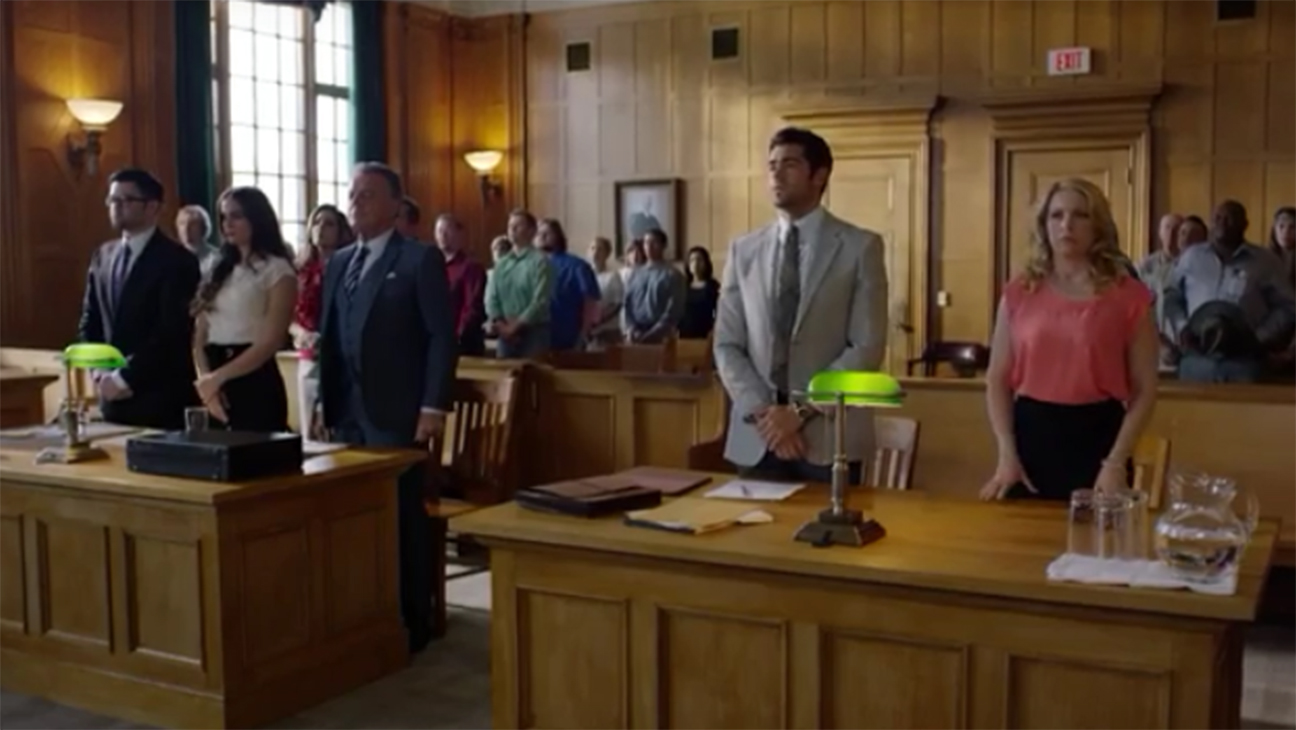 Letting God be your witness sounds nice, but doesn’t help you in the court.

What in the actual fuck. Let me first say that God’s Not Dead is the worse movie. It ends with one character homeless, abandoned by family (/beaten a little bit), but finding Jesus so its okay. A reporter getting Cancer despite finding Jesus, and the teacher losing, accepting everything, and still finding Jesus in time to get killed right away. It was a complete mess.

This film is also a complete mess, but with less death. Now, one obvious problem with this movie is that they take a normal teaching situation that in no way, anywhere, would there ever be an issue with it. That helps drive the point home I guess, because everyone watching it knows she is innocent and the trial becomes extremely ridiculous because of it. Of course we are on her side, the writers suck and are implying that this type of thing happens all the time. It almost makes every argument the movie tries to make invalid because they didn’t even try to present something plausible.

They made the ACLU guy out to be some huge evil villain. He probably eats babies. He scowls and twirls his imaginary mustache when he tells the parents before the trial that they will “for once and all finally prove that GOD IS DEAD!” I had to imagine some lightning bolts in the background, it really helped.

But literally the trial isn’t about Jesus existing or not. The entire trial is a bad sham that flows in no logical way. First of all, Grace’s main defense is she did nothing wrong and wasn’t preaching in the classroom. They decide (half way through the trial) that their best defense is to prove a historical Jesus, which means she can mention Jesus in a history class. Makes sense. However, all of the uproar outside of the trial is about religion in the classroom and whether Christians can talk about Jesus in a religious way. Grace isn’t arguing she should be able to do that, she knows when it is appropriate and never suggested preaching should be in the classroom. Or mandatory school prayer. Or anything.

So guess what. She wins in the end. Not by proving the historic Jesus. But because of having a break down when her own lawyer verbally attacks her to talk about her faith. He goes super mean, making everyone feel bad and going to her side. That’s right, they don’t even try to win the trial in a good way. They do something that wouldn’t be allowed in a trial (because treating your witness as “hostile” doesn’t mean yelling and screaming a fit) and end it in the worst way. It is so damn stupid.

As a follow up, Brooke couldn’t talk to the teacher the whole time (because reasons?), and when she finally does, it is after the trial. Everyone is gone after the verdict, but she says no, go spread the word. Somehow Brooke gets out of the courthouse first, before eager reporters and everything, to scream out that “GOD’S NOT DEAD!” to hundreds of Christian supporters for a big party. They were there, silently protesting while atheist people yelled and called names the whole time. Of course, the trial didn’t conclude anything about the legitimacy of religion.

And if the religious people say it was a win for religions, then they missed the point of Grace’s defense and the fact that she did nothing wrong. So they are pretty hypocritical. Celebrating in that way seems to imply that Grace did preach in class and it is now allowed. It is all nonsensical. 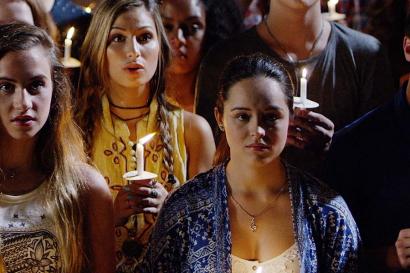 I need another picture in here. My bad.

I think that is all I needed to rant about the trial. So here are other annoyances.

One side plot is Paul Kwo finding his new religion difficult to grasp. He doesn’t stop going to classes or anything, he just is also Christian. So we have a scene where his dad comes right off the plane from China, still in his business suit, to yell at him and tell him he has disappointed his family and not his son anymore. Because he became Christian without changing any other aspect of his life. It is ridiculous. A few scenes later, his character decides to become a pastor, which changes his future and would then warrant maybe a father coming to yell at his son for throwing his life away. But the events are all out of order here.

Trisha LaFache’s reporter is useless here. She is a bad spiritual guide or something. But what is strange about her involves Duck Dynasty. A show and cast that are real in this film. She interacted with them in the first film. So they decide to make Brooke’s BFF her niece as well, just to fit her in. And that girl is played by Sadie Robertson, a real life member of the Duck Dynasty clan, who is even on the show. That is both awkward given her plot, and bad given it breaks the immersion having a real person in the world as an actress playing someone new.

Finally, the pastor Dave plot line is all over the place. He gets sick, is super busy, has to be on the jury, but also has to give his sermons to the government for reasons. Why? They only really have one quick scene to explain it, and it is gone in the blink of an eye. A line is uttered that “they tried it in Houston!” to explain its relevance. However, we know that this movie also takes place in Houston, so…

Anyways, Dave refuses to turn in his sermons and instead turns in a letter. After that scene, the movie forgets about it and credits roll. It was a bad way to set up a future movie, again, based on a non real issue. However we did get a post credit scene of the pastor getting arrested for not turning in sermons. Ah, there it goes. God’s Not Dead 3, eventually. Setting up their cinematic universe.

This film has a lot of issues. It brings up real historians and lies about what they said about Jesus. It attempts in no way to actually prove anything through the trial, going for cheap entertainment and to make an echo chamber instead of actually producing any meaningful change.