Hey, I bet by the name alone that you will think Eagle vs Shark is a super weird comedy?

I don’t usually want people to judge the movie by its cover, but using the cover to help get yourself in the right mood has never been a bad thing. 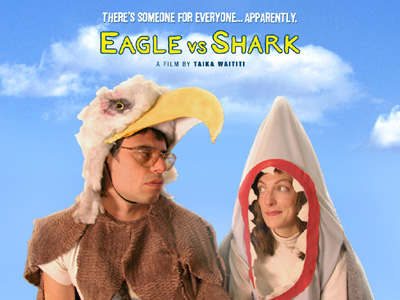 Yep, it is going to be one of those kind of movies.

This is a movie about socially awkward people, and love. Lily (Loren Horsley) lives with her brother (Joel Tobeck), who is a cartoonist, while she works at a burger joint. They are devoid of good technology apparently, because after she takes an order from the customer, she apparently has to walk back and tell the kitchen. Fast food joints there are weird.

Either way she was picked “randomly” to have her job cut, because corporate demanded it, so she is kind of meh, and decides to try and get that cute customer who always walks in, Jarrod (Jemaine Clement) on his lunch break. After finally talking with him, he asks her to invite another girl to his “Animal” party, where everyone dresses up as their favorite animal. There is also a video game fighting tournament, which she kicks ass at. Then they awkwardly kiss and have some sex.

Hooray, now kind of dating. But Jarrod is a jerk, yet she still likes him. He convinces the brother to drive them to his parents house (pretty far away). He hates his family, but he is there for revenge, to KILL someone! A bully in middle school, who used to beat him and others up all the time. Well now after all his training (Video games) he is ready to take him on once he returns from afar.

But also his family doesn’t seem to be impressed enough by Lily, so he kind of breaks up with her, in the middle of the stay, with no way to leave.

Yep. More asshole than awkward. Either way, the rest of the trip is super weird and the eventual fight and return. And shit, that is about it.

I can’t say I am expert on New Zealand film, as this might be the only one I have seen. Definitely seen NZ tv shows, if we say Flight of the Conchords counts. But it is definitely a lot dryer and maybe sometimes subtler than other forms of humor.

And it is about 100% of this movie. Sure it has its wtf moments as well, but most of it is relied just on the awkwardness of the two individuals, in the situation they are in and trying to be politer at all times. Very proper New Zealand tactics.

This movie wasn’t any where close to amazing, but it wasn’t horrible either. At least it tried something new, where new is just…mostly nothing.