I am proud to say that I actually saw Despicable Me in theaters. Yes, now I see everything in theaters, but in 2010, it was rare as shit. But I was like hey, those yellow things look cute. Let’s watch the movie!

I figured I should probably write a review on it now, with the sequel coming out later this summer. Did you know know about Despicable Me 2? I find that impossible. Their ads have been everywhere since January at least. Open your eyes people. 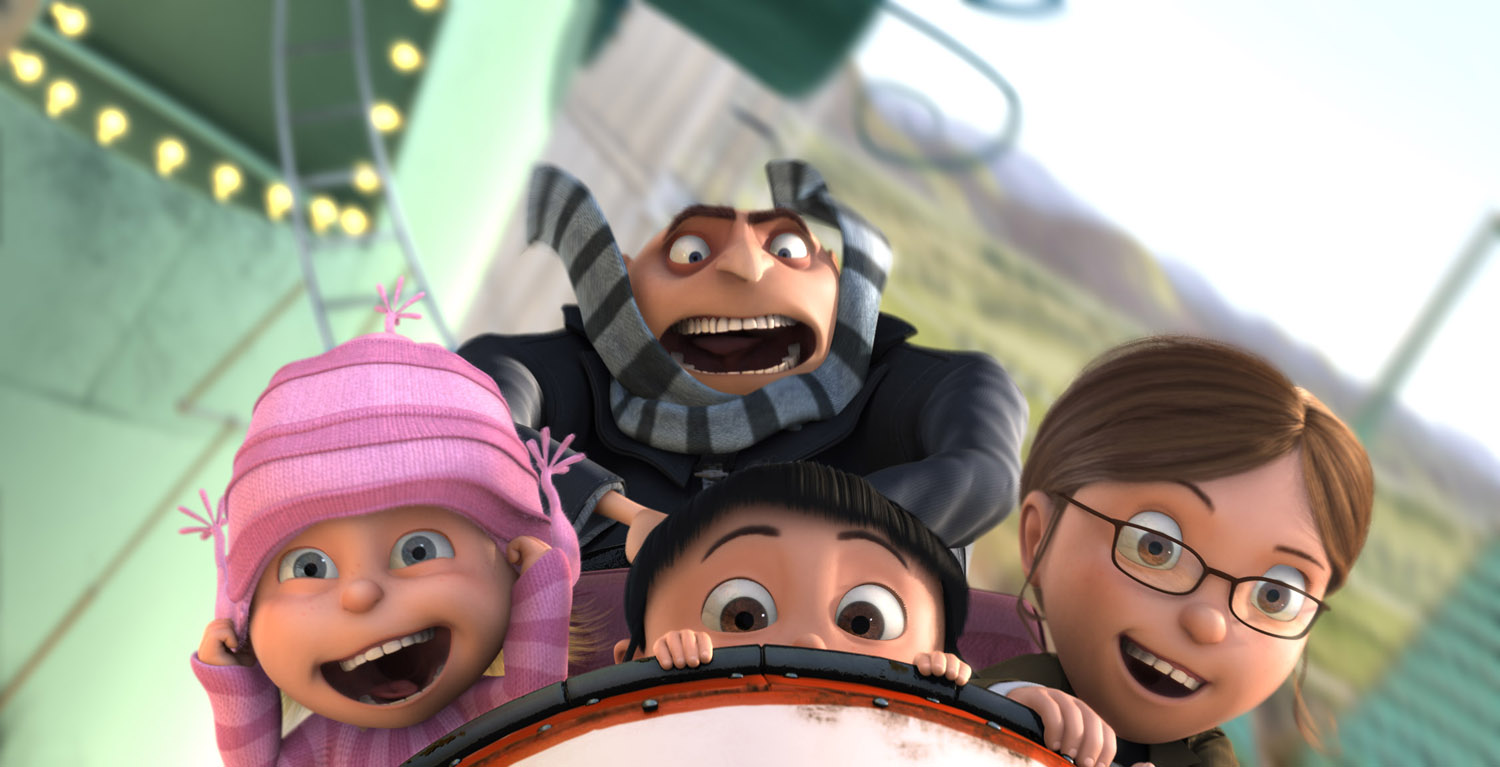 Yeah, your eyes like you were on a roller coaster.

Gru (Steve Carell) is an evil genius mastermind! Trust me, he is wicked evil. The best at being a villain of all time. How do you know? Because he says so, and he has minions! Little tiny yellow minions, that are awesome. They speak inaudibly and they are the main selling point of this movie, really.

Either way, he isn’t so cool anymore. Some young upshot villain named Vector (Jason Segel) (because he has magnitude AND direction) has stolen the great pyramids. Yeah, what a dick. Now Gru feels inadequate and has to one up them by stealing the moon. Jeez. But he can’t get a loan from the Bank Of Evil / Mr. Perkins (Will Arnett) without a shrink ray in development, so he steals one! Success! Vector steals it from him though. Damn.

So Gru gets the idea to adopt three little girls, make them go to Vector’s house to sell cookies, so he can sneak in and grab the gun back. Then he can dump the kids off later. But they are rambunctious individuals. Ballet. School. Amusement parks. They are hard to take care of, especially when he isn’t cut out to be a parent. But then he learns…to love. Russell Brand plays Dr. Nefario, the scientist that works for Gru.

Aw shit yeah, I forgot I can have gifs on here. Look at how cute those fuckfaces are.

Did I mention I love the yellow minions? Yeah. Most people do. But that is about all I liked from the movie. The plot was a bit forced for me, and not at all exciting. Obviously it was all about him and the little girls, and obviously the girls were there to mostly be a thorn in his side, but actually learning to care for them in like, a day? How the heck did that work?

I just. I just can’t explain it. I re-watched it and was bored the entire time. Maybe the kids were all too young and that bugged me? Why can’t one of them have been more teenager-y? The oldest is close. But not too close. This was the first feature of Illumination Entertainment, who later gave us the bad Hop and the disappointing Lorax. I in general prefer these awesome sexy CGI animated movies to give us more realistic people, instead of the overextended ones (like Dreamworks tends to do).

Yeah. I know. I think people like this movie just for the minions and I am an old curmudgeon.

1 out of 4.
Tags:1 out of 4, Animated, Comedy, Despicable Me, Family, Jason Segel, Russell Brand, Steve Carell, Will Arnett