I have beard envy. So one of the main reasons I find myself willing to watch a movie is if a main character, male or female, has excellent facial hair. I barely know how to shave, let alone make my beard grow to any great and professional level.

It is why I wanted to even see Mortdecai, damn it.

So if you show me a movie poster of Cop Car with Kevin Bacon‘s head, with the most glorious of stereotypical cop mustaches, I will drop whatever I am doing (no not my baby) and see it as soon as I can. Plot, other actors, director be damned. I just want to see the mustache. 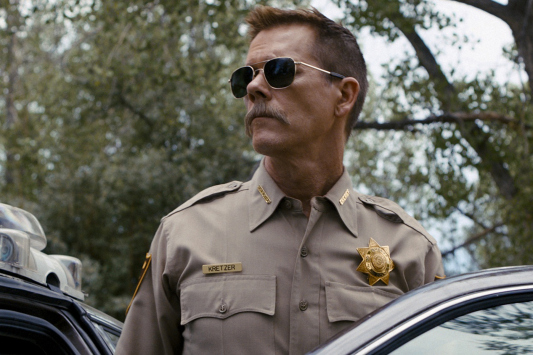 Aww, they gave the mustache little aviators, a badge, and everything.

You have never seen two kids more badass than Travis (James Freedson-Jackson) and Harrison (Hays Wellford). They are just 10, but they ran away from home. Even have some beef jerky in order to have food for their trip. Shit, they’ve been gone for hours, saying curse words, they are probably 50 miles away from home now.

And then they find a fucking cop car! How badass! They are brave enough to throw rocks at it and touch it. But no one comes to yell at them. Strange. Shit, it is unlocked too. And the keys are inside. Should they? No… Then they’d get in real trouble.

Of course, the car belongs to an actual cop. Sheriff Kretzer (Bacon). He was out in the middle of nowhere for a reason. Not a good, honest to goodness cop reason. And he needs to rectify the situation immediately, no matter who gets hurt along the way.

Also featuring Shea Whigham as a dude and Camryn Manheim as a woman. 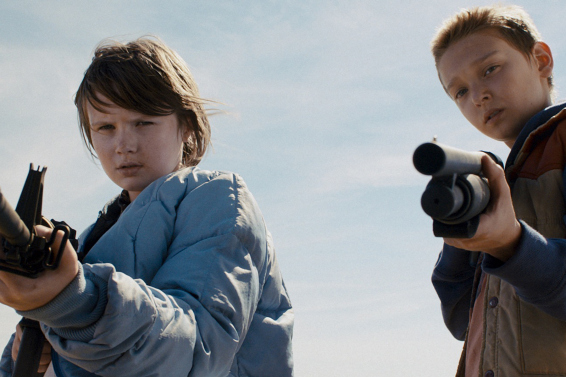 For a movie about a guy trying to murder a couple of kids, it was overall pretty tame. It isn’t that long (86 minutes) because it doesn’t have a lot of anything to work with. I expected our cop to be a bit more crazier and a lot more vicious. I mean. Cocaine was involved? Where is the kiddy torture? I don’t condone kids getting tortured, I just expect movies with simple plots to go to the expected dark areas!

Just like there isn’t a ton of plot to talk about, there isn’t a lot more to say about the film. The kids are stupid and probably act just like 10 year olds. The cop is pretty damn smart, I am surprised he found a way to find the kids at all given how big the world can be.

But the film just didn’t give enough. It was tame when a viewer would want more. More shenanigans!