I am now a man on a mission. I really do want to watch all of these shitty dance movies no one has heard of. The only reason is because Stomp The Yard was a better movie than I gave it credit for.

So I had been judging all of these movies, some of which I have heard and most of them I never knew existed, just because of the genre, dance. They can make a good dance movie. I believe in them. The dancing just has to be amazing, and a plot that isn’t stupid. That’s all we want, people.

Which is why I found a list of dance based movies over the last few years, and the first one on that list is Battlefield America. Wow. That movie sounds super intense. I cannot wait.

Sean Lewis (Marques Houston) is a lawyer, and pretty good at his job. In fact, he is going to make partner soon! Unfortunately, he gets into some trouble. He has to do community service. He also thinks he is better than just picking up trash, so he wants a better community service.

Well, the judge has officially changed his mind. He can teach kids how to dance. What? He doesn’t dance himself, either. Apparently they just need a leader. Because they are bad on their own.

So he hires a choreographer, and hangs out with them.

So what kind of dance is this? Ballroom? No. Swing? No. Tango? No.

Street battle hip hop. You might be asking yourself, why in the fuck do 10 year olds need to learn that? Yeah. Exactly. Well, in this alternative universe place, there is some competition called Battlefield America, where it is for kid groups to battle dance each other…

…And it is popular and people watch it? And find it exciting?

I just. I just don’t know really what to say anymore. Tristen M. Carter and Chandler Kinney play two of the main kids, Mekia Cox works at the community center, and Christopher Jones plays the coach of the best dancing crew over the last three years. 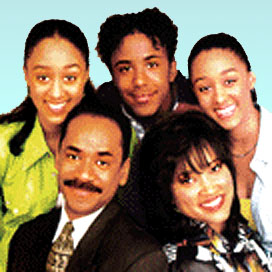 In case you were curious, the main star was of course this kid in Sister, Sister.

The whole time I watched this movie, something felt inherently wrong. It took me awhile to figure out what it is.

For a dance movie, it does show a lot of dancing, just of other crews. At least four times throughout the film, they have these 1 on 1 dance battles, each one featuring the crew that always wins the last three years. They are on the left side of my picture up above, and the underdog crew this film is about on the right. Each of these dance scenes were actually really long, with constant changes from the crowd, back to the dances, to the other dances. It flashed around a lot. It would have been cooler to see it all in one fluid motion, but whatever. The main point is the camera angle for the dance was always placed super low, and aiming up, because these are all kids. It had to be really low.

It felt awkward. It felt uncomfortable. It was a bunch of young kids doing dancing that they shouldn’t be doing yet, pre puberty.

Then I came to the realization. This is a movie for pedophiles. That is literally all I could think about. Seriously. Here is the opening credits scene, about three minutes long. Tell me you can watch it and don’t feel uncomfortable and potentially nauseated.

There is so much of that in this movie, outside of the shitty cliches and similarities to The Mighty Ducks. I am giving it the 0 because of how uncomfortable and awkward it made me feel. I wanted to burn the movie when I took it out of my player, but I didn’t want to have to pay for a new copy at the rental store.

Watching these dance movies is apparently going to take me down a really fucking strange and creepy path, one I don’t know if I am ready for anymore. Just. Just holy fuck, was this movie awkward.