First off, I am a bit disappointed. The movie 42 doesn’t get me any closer to figuring out the question of life, the universe, and everything.

Unless that question is baseball related. That’s right, 42 isn’t about The Hitchhikers Guide To The Galaxy, but instead baseball, go figure. Not just any baseball story, like the forgettable Trouble With The Curve. This is baseball history! The story of Jackie Robinson, the first black MLB player. Well, technically the first black MLB player in modern, post World War II baseball. After all, Moses Fleetwood Walker played in the MLB for a season in 1884. But after that, sixty years is a pretty long time, with “Negro Leagues” put in place, so Jackie Robinson still turned heads in his debut. 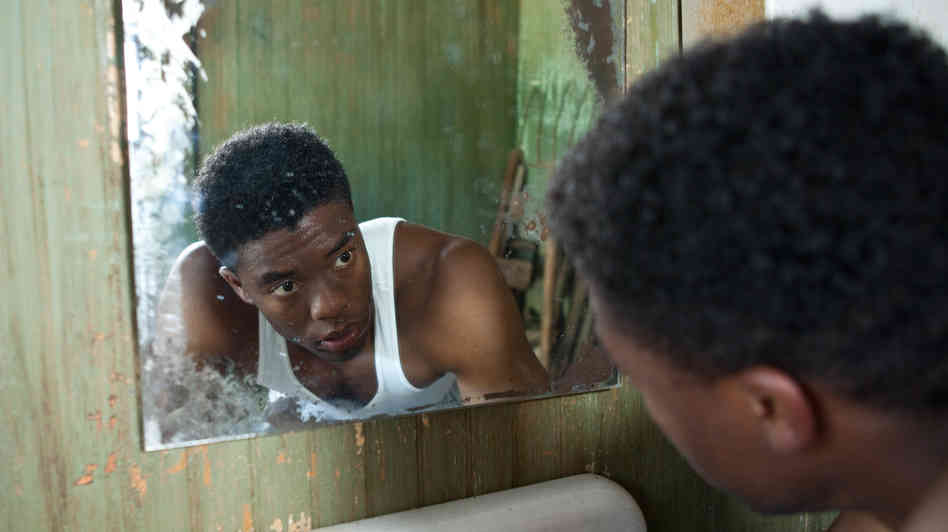 Despite the turned heads, he still didn’t help us answer that dang question…
42 doesn’t focus on Jackie Robinson’s (Chadwick Boseman) entire life, but instead about 2.5 years of it. But before we get to Jackie, we first get to learn about Branch Rickey (Harrison Ford), GM of the Brooklyn Dodgers. If we listen to his reasoning at the beginning, he wants to try something crazy. That’s right, a black man on the Dodgers! Why not, that should increase ticket sales, and he will also do whatever he can to get his team a pennant.

So he picks Jackie from the pile, gets him on their minor league team, and hopes he can kick enough ass to make it on the MLB team, while holding back his anger enough to not let the rampant racism get to him.

This is a true story, we all know he makes it to the team after a year in the minors, and the rest, really is history. We also see a little bit into his relationship with his wife (Nicole Beharie), and I do just mean a little bit. There are other members of his team who all embrace in him different ways, some with petitions (Ryan Merriman), some with open arms (Lucas Black). Some managers didn’t give a shit (Christopher Meloni), and some made it their mission to make his life a living hell (The Phillies) (Alan Tudyk). But that is to be expected from a Philadelphia based team I guess.

This also has the smaller, yet still important, story of Wendell Smith (Andre Holland). He was the the first black member of the Baseball Writers Association of America, but first had to travel with the teams for two years, writing articles about Jackie and his struggles. That means Jackie Robinson was influential on more than just the baseball level, he just chose to end racism through beating the other team’s pitchers and stealing bases.

Oh there is also a John C. McGinley cameo as the radio announcer, dropping classic line after classic line of old timey talk. 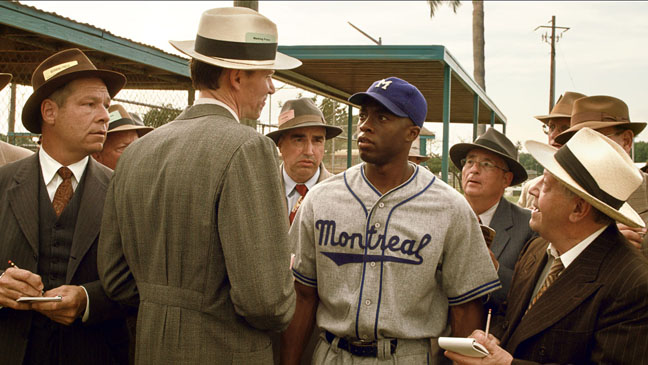 Jackie probably thinks I am talking far too much about white people in this review.
Speaking of white people, I guess Branch Rickey was pretty dang important to this story, but no one really talks about him in popular culture. The filmmaker makes sure you know how much of this all falls on his shoulders, and how it would not have happened (so soon) without him. Yep, this just ends up being another civil rights movie where white people are the saviors. Just like The Help and The Secret Life Of Bees. This literally keeps happening in film, and it is kind of annoying.

Even though in this example it might be true, it is still frustrating to see that it is focused on so heavily just to sell more tickets.

I loved Chadwick Boseman as Jackie Robinson. I am glad they went with a relatively unknown actor for the role, because that was one of my bigger problems with the movie Ali.

Overall, 42 is a feel good inspirational movie and it succeeds at that level. There is some intense emotion in here, but it still ends with everyone smiling by the end. It could have dealt with a lot more of his life, but hey, after his first year, he wasn’t the only guy able to make the switch. He was a great athlete, and this is an acceptable (if not entirely accurate) portrayal of his life. I personally still left the theater happy, despite any real issues.