21 Jump Street (the movie) is nothing like 21 Jump Street (the TV show). Have I seen the show? No. But I know “about it” enough so that I get it. That was more of a crime drama thing, not really a comedy. The movie is a straight up comedy, with tons of references to the show.

You can like both the show and the movie, because it is clearly not a “Remake” but its own thing, taking the basic premise of the show. You know, in case you were curious. But I should also note that when I first heard about it my reaction was a resounding “What The Fuck!?”

But are these two knuckleheads at all believable in these roles or as cops?

Movie begins in 2005, when Jonah Hill and Channing Tatum‘s characters were in school. Hill, nerdy and shy. Tatum, athlete and dumb. 7 years later, some how, they are both wanting to be cops. They remember each other, and agree to work together (helping study / train) and become great friends and partners!

And after a bad first arrest while being park patrol on bikes, they get re-sentenced to an undercover gig on Jump Street, because they are “young looking” to infiltrate a high school and try and stop this new drug from being spread. Could be lethal, but they know nothing about it! So they have to infiltrate the dealers, find the suppliers. So says Ice Cube, their sergeant.

They meet the “cool kids” Brie Larson and Dave Franco, and accidentally switch their identities. ROLE ROLE REVERSAL. They find the dealers, and work on befriending them in order to find the supplier, and you know. Hopefully save the day without getting fired or expelled.

This also features Rob Riggle as a PE teacher, Ellie Kemper as an AP Chemistry teacher, Jake M. Johnson as the principal, and Nick Offerman as their former boss. (This was my paragraph of “People you probably recognize from a TV show”). 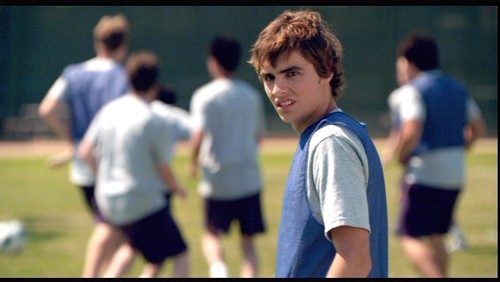 Yes, that is the younger brother of James Franco. And it would have bugged you the whole movie noting how similar they looked. He is formally known as “Greg the soccer player” in Superbad.

But outside of all of it, was it funny? Yeah, shit was funny.

It was a self aware comedy too, making obvious jabs at the idea of recreating an 80s drama show into a modern comedy movie. Very easy to catch jokes too. Not everything has to be very subtle.

The made up drug is great, and the moment when the characters were forced to use it? Some of the most funniest consecutive minutes of my life.

Ever joke I don’t think hit the mark, but a large percentage of them did. The action scenes they threw in got to be quite heavy (and slightly predictable) and at one point they actually made a claim that goes against the teachings of South Park, a very hard pill to swallow.