Every two years, I get to start a review talking about how every two years Dinesh D’Souza releases a piece of crap documentary.

It is the only thing getting him money, and it is presumably getting him nice amounts of money too, since he just keeps doing it. Maybe he sells some books and does some speaker tours too, I don’t know, but dumb asses keep throwing their money at him, so this whole thing continues.

I am meant to be a bit unbiased about these things, but the past films of a director totally should influence the future ones. Then you can see growth. Or see if they keep the same bad decisions that are calling cards for them. D’Souza’s calling card seems to be conspiracy theories, creating false narratives, projection, and usually, repeating the same arguments over and over in these documentaries.

Like three of them in a row seemed to pretend that why were different, but kept falling back on the weird same arguments about the history of parties and didn’t offer almost no new material between them. But yet, he made money.

So I will say this about 2000 Mules, the latest effort. This documentary is finally, FINALLY, about something new. Although just because it is new doesn’t mean it is worth watching. 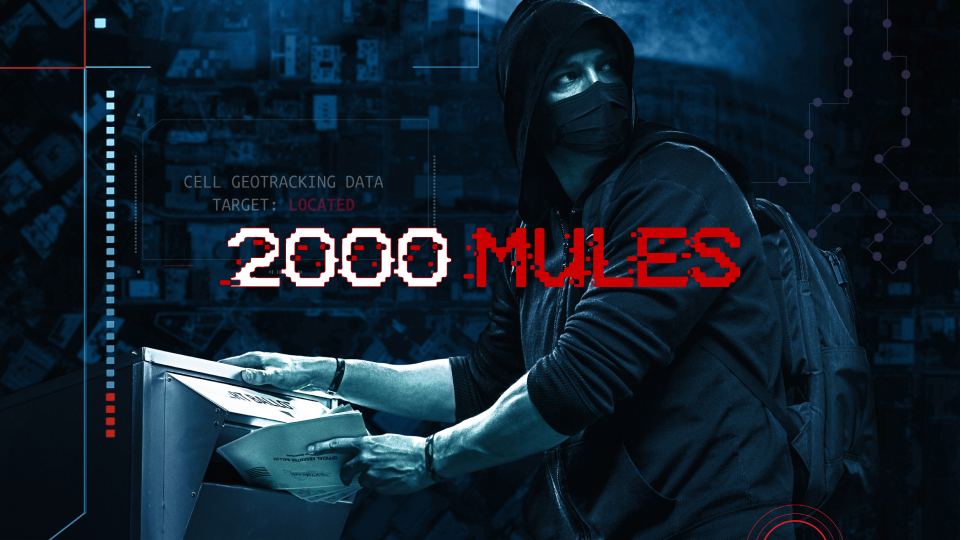 This cover photo is reenacted for maximum fear mongering.

So what is 2000 Mules about? It is saying that at least 2000 people were hired during the 2020 election, to take pre filled in ballots to ballot boxes in states that were going to be close. To then stuff 3-10 ballots at a time in these ballot boxes, before going to 5 or more in an area in one night, early in the morning, whatever. And then doing it again, and again, and again. The assumption being these are people paid by Democrats to push the election in 2020 to Joe Biden’s favor, and is why Trump lost the election.

Okay, first of all, I can’t debunk everything in this review. That isn’t the point of my reviews. What I was surprised to find out though is how detailed the Wikipedia on this movie is, including noting how all these claims are basically bullshit, with sources. So here you go.

Instead, let me just note a few things. One, this thing really likes to attack people who are voting early in the morning or late at night, with the assumption that if you do something late, you are clearly suspect. Which is factually stupid. So moving on.

Two, it claims it doesn’t understand any level of selfie/internet culture. Since it attacks people on cameras who would take a PICTURE on their CELL PHONE when putting a ballot in the box, and said it was clearly them proving they did it for pay. Instead of like, you know, the many people who love to vote and take pictures of their vote and encouraging others to do so.

Thirdly, and this one is the most hilarious. They will show a video of someone with multiple ballots for whatever reason they might (maybe they brought in their families, I don’t know, I don’t care). And claim that this person also went to many other drop boxes, and would do this many times. And then they never showed that person in another video again. Like, it seems like the obvious proof of something awkward. Show the same person, in different boxes, or the same box, voting on multiple days or times. And they don’t. Why? Because this whole thing is just bullshit.

Honestly, yes, the Wikipedia does all the work.

This is a documentary that was even talked about in the January 6 public hearing already, and more people noted the dumbness about it.

So congrats D’Souza, you tried something new, and it was worse than before. I always need a good mind refresh after these things.