I know what you are thinking. “This is just some dumb Romantic Comedy. What’s Your Number? What is with movies that ask questions in the title!?” Or something like that. But probably not. Probably just never heard of the movie. That is the simpler guess!

But hey, it also has enough T&A for the fellas and the ladies, so even if you are shallow you are covered. 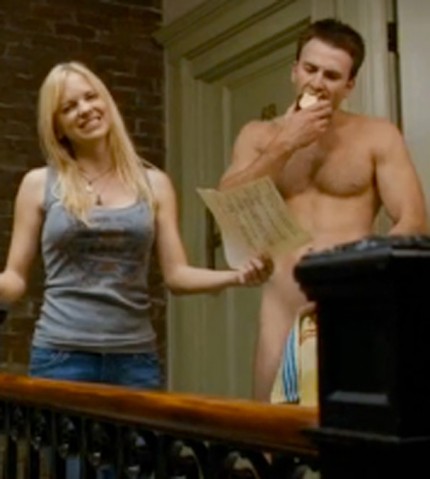 Anna Faris is a dirty dirty whore. Or at least that is what she thinks of herself after reading in some magazine that at most, most women sleep with 10 guys. Women who sleep with 20 or more have a high percentage of living alone! Shit! She has slept with 19 guys, more than all of her friends. The self esteem issues she faces even drives her to get a boob job (Oh wait. No, that was real life). Doesn’t help that she seems to change everything about herself when she meets a guy too, instead of being herself (Ending moral alert).

Her sister is getting married (Ari Graynor) and so she gets the great idea to try and see if any of her ex-boyfriends are awesome now, and try to reconnect with him. That way she doesn’t push the number over the “limit”. With the help of her equally (or more) promiscuous neighbor Chris Evans, she sets off to find the people on her list, to see if she can save herself!

Its amazing how many famous people she ended up seducing/dating/spending one night with. Including Zachary Quinto, Joel McHale, Andy Samberg, and Chris Pratt (which is a great side story), and even Aziz Ansari (Who we only get to hear on the phone, but its obvious it is him). 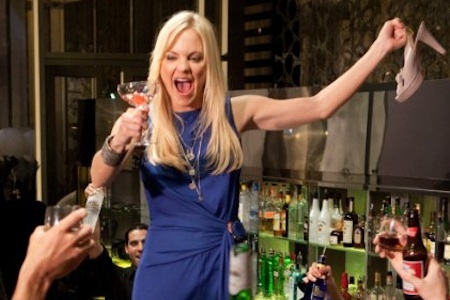 Also, Alcohol is involved in a lot of her decisions.

I won’t say how it ends, because you know how it ends. But I actually guessed it would end a slightly different way than how it actually did, so bam, I got owned.

I think Anna Faris spent a lot of work trying to make sure the movie was funny (and might have done it because she wanted to be in Bridesmaids but didn’t make a cut? I cant remember). Something about woman power. But I did laugh a bunch, mostly at stupid stuff, but I found it funny. Not at all close to any sort of typical RomCom. Of course one disadvantage is that if you hate her voice, you will hear it a lot, and it will suck. But she is a mostly likable star, and has good chemistry with Evans (who is a bit less Douchey than he normally appears).

But hey. Slackers rejoice. And I will rate this as I feel fit!