I love this title, We Bought A Zoo. It probably got a lot of slack from it, but I think it is great. After all, now I know what the whole movie is about. Bad for people who want to be surprised, since its hard to not know the title. But it is also based off of a true story (Kind of), so that gives it more appeal too. 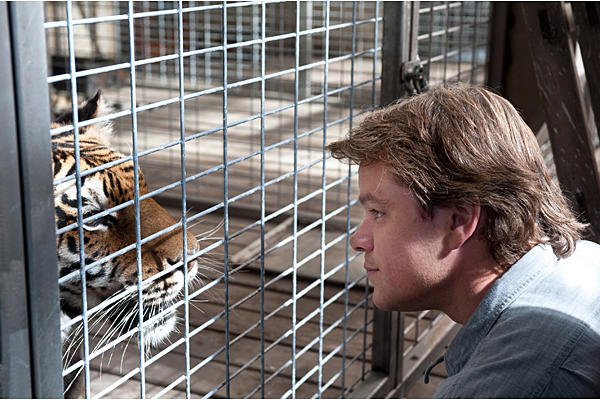 Everyone knows when you need to jump start a career, you do a family film and work with animals (that hopefully don’t talk).

Matt Damon plays an adventurer and writer. He goes around the world, tries new things, and interviews great people. Seems pretty silly. Brings home money, but his wife handles most of it. But then she dies. Unexpectedly. Leaving him to figure out what to do with his two kids (Colin Ford and Maggie Elizabeth Jones). But his son has now been expelled from school and they need a change so they look for a new house.

They find a great house! But it comes with a stipulation…they have to take the zoo that used to be there too and work on its upkeep. It is currently owned by the state, and if nothing happens soon, they will be shipped away and some put down. Due to his daughters peer pressure and his ability to just do stupid things without worrying about the consequences, he signs the dotted line, despite his brothers (Thomas Haden Church, an accountant) desires not to.

Their goal is to get the place back up to par before July, to earn most of the profits during the summer, their best months. Lot of work and money must go into it though to pass the inspection. Scarlett Johansson plays the head zookeeper, and now lives with her mom after a quick divorce (whats that, two single leads?). Her niece is homeschooled and works at the shop (Elle Fanning), and the head animal handler is Angus Macfadyen, a very angry man indeed. 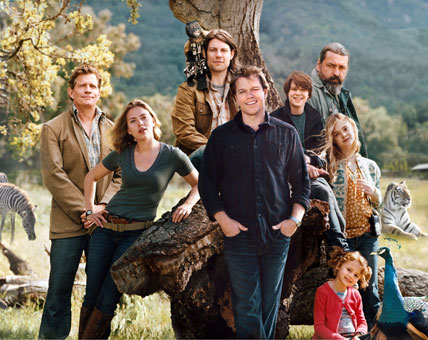 BFFS. Also does Matt Damon look fake in this picture?

I love easy plots. Family buys a zoo after mom dies. Work to make zoo a better place for the community. Succeed? Of course. People don’t make true stories based off of failures.

The title is uttered mostly from the daughter, overall probably about six times. I think the real story didn’t have the guys wife die until years after they bought the zoo (a process that also took years). But that makes this story more complicated if it lasts years and has the wife constantly around. The ending I thought was really sweet, and thanks to that tear jerking music, well, you know.

The movie is kind of like a very family friendly modern version of Field Of Dreams, but not really.

While I thought it was a decent film, I wouldn’t describe any of it to be top notch acting. It was very predictable, but still acceptably heart warming. Honestly they made such a big deal out of how far away it was from “civilization” I thought there was no way they’d have any guests after the first week. The real one I am sure still exists, but I feel like the movie one was probably set up to fail. But no worries, if it fails Scarlett Johansson’s character can come move in with me.