Wall Street: Money Never Sleeps is the sequel to the critically acclaimed movie, Wall Street, just set and made about 23 years later. I mean, why not, clearly that is a long enough time to wait for a sequel. No one likes them rushed. It might appeal to a completely new crowd, but as long as they don’t do stupid things with the characters, then it should be good right?

It should be noted that I watched Wall Street for the first time a day before watching the sequel, and loved the original. Charlie Sheen and his dad did a great job, as did Michael Douglas. 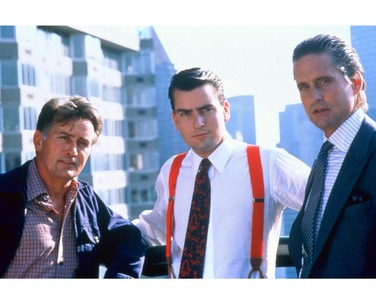 Why Martin keeps playing the dad character to his actual sons roles, I will never know.
Must have gained a lot of false memories while parenting.

The movie begins with Michael Douglas’ character getting out of jail. What? Wall Street didn’t end with him getting jailed. I guess that happened in the 20 some year break.

The main character of this movie is actually Shia LaBeouf, which makes total sense, why not. He is dating Carey Mulligan, the daughter of Douglas, and isn’t in to the ridiculous wealth thing, like her dad. Greed is bad she says! He is also a young stock broker, for a dying company lead by Frank Langella. The economic crash has already occurred, from 2008 or whatever, so they are hoping for a bailout and it isn’t looking likely.

Pseudo-threats, lead by Josh Brolin, lead Frank to kill himself, leaving his company and Shia’s future in question! So he lied to some people and hurt Brolin where it matters, his wallet. This made Brolin like his balls, and hire him. At the same time, Shia is looking to his soon to be father in law, for help, advice, as he likes him (unlike his fiance).

Eventually people screw over other people. Brolin also was the man responsible for imprisoning Douglas, apparently. Then the new bad guy gets what is coming for him, and Douglas’ character turns over a new leaf and everyone has a happy ending. 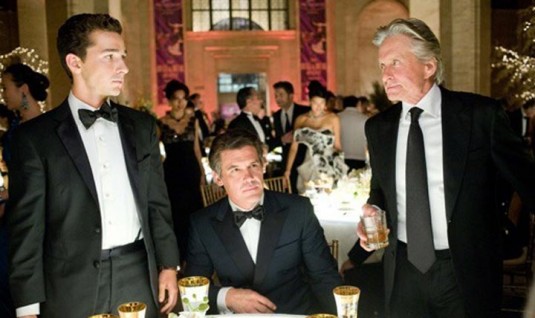 I hated this sequel. First off, it was kind of boring. Second off, it played off of post crash wall street, instead of during crash wall street, a much more exciting time. When I tried to get people to watch Margin Call, I was told it reminded them of this movie, but they are “nothing alike”. In terms of what they are overall about and how good they are.

Thirdly, they killed Michael Douglas’ character. Not like a death, but what he was, and how he was most of the movie, they decided to ignore all of his life and have him change last moment, and do something unlike anything he has done before. That shit was stupid. I am all for redeeming characters, that is a big problem I have with Toy Story 3, but the way they did it was out of no where, unbelievable, and just gross to look at. My eyes and ears hurt when I saw it.

Charlie Sheen’s character was in the movie briefly, but it didn’t seem like his character either.

Finally, this movie was more confusing than the first one. They did a poor job of explaining everything that was happening, and it took forever to catch up. From all the people who became stock market folks cause of the first movie, this one might cause less people to choose the field. Huh, maybe that is a positive then?