I am shocked that it took me so long to watch Vicky Cristina Barcelona. First off, it has actors/actresses I like in it. Second, I actually kept putting it on my schedule, and just putting it off. Thirdly? Someone once called it ‘Ménage à trois: the movie” to me. I mean, seriously. How did I just not stop what I was doing and watch it immediately?

The other fun note about this movie? While I worked at Blockbuster, there was like, eighteen copies of this movie for sale the whole time. Eighteen! I ended up buying a Wal-Mart copy, because it was the same price and new. 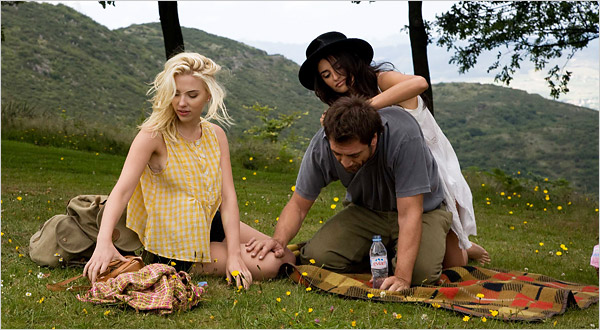 Is this the trois moment? Is it?!

Vicky (Rebecca Hall) and Cristina (Scarlett Johansson) are going to Barcelona! And now we have the movie title. They are going to stay there for a few months with relatives of Vicky (Patricia Clarkson, Kevin Dunn) because they have a big house and their children are all gone. Sweet. Vicky actually has a legitimate reason, some how her masters studies involves Spain. Cristina is just there for the support and adventure!

They also have different views on love, complete opposite, so much so that the narrator deems it important! Cristina is a free spirit, and rushes through things, flames out quickly. Vicky likes real romance and patience and long commitments. That explains why she has a fiancé (ramping up the French here people. For a movie about Spain) with Doug (Chris Messina).

But one night at a museum, they run into a local artist Juan (Javier Bardem), who looks like he just wants to seduce whoever is easier. Even invites them to an Island for awhile. Clearly things are going well for Juan and Cristina, but she gets sick, so Juan has to spend a lot of time with Vicky instead. Moment of weakness, and boom, sex. Awkwardness arises when Cristina then gets better and continues her relationship with Juan, whoops. Even moves in with him. He kind of likes both, with Vicky realizing that she doesn’t love her husband anymore.

But nope. Then the crazy ex-wife Maria (Penelope Cruz) shows up. She has to stay with them too, because she is on suicide watch. And well, maybe Juan has feeling still for her. And Vicky. And Cristina.

Damn, that is a lot of lovin’. 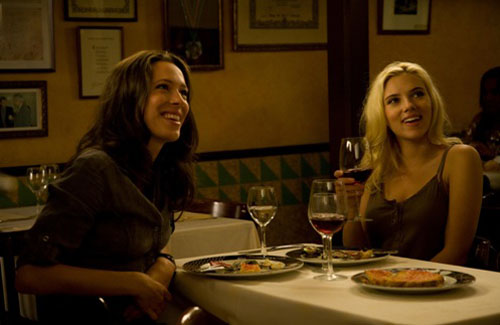 Yeah, jokes on you, that previous picture had Cruz not Hall.

Of course this is a Woody Allen movie. For whatever reason I didn’t know that before hand, but now that I do afterwards it makes perfect sense. He does have that mini obsession with Scarlett Johansson after all, like a lot of men. Most of us don’t put her in movies though.

This film was definitely both quirky and natural, which is a weird feeling. But after it all, I wondered what was the point. Is it to live life however you want, regardless of what other people think? To always question where you are in life? I don’t even know.

What I did see was an okay story, that did go places I wasn’t expecting, but doesn’t seem like the type of film I’d ever see again.