Upside Down hit theaters in the first half of March, but it ended up only getting limited release. I am not sure, everything about it made it seem like a movie America would go bonkers over. A nice love story, science fiction, CGI, famous people, and a decent sized budget.

But due to its limited release (11 in the USA its first week), and no one hearing of it, it might as well have gone straight to DVD. Very strange indeed. It was totally released in other countries first, including Russia all the way in August 2012. Fucking Russians, starting to get random foreign yet still American movies before us.

This is the second movie to feature Miss Dunst kissing in a strange way.

In some other part of the universe, we have two planets that rotate around a star. However, these planets are very very close to each other and spin together, around the star. They each have their own gravitation field and humans living on them. But an item that is created or born on one planet will only be affected by the gravity field on that planet. No, it doesn’t make sense in real science terms, but its a movie, so lets call it magic.

You can offset your weight with items from the other world and fall the other way of course, but the matter on different planets will get hotter over time if in contact with each other and eventually burn up. Apparently, in this movie, matter doesn’t include humans, just items.

Either way, one planet sucks, the other is rich. The rich one exploits the poor one, pretty standard stuff. Adam (Jim Sturgess) ended up accidentally meeting a girl from the rich planet, Eden (Kirsten Dunst) when they were kids, climbing mountains that almost go up to each other. Due to an accident they stop seeing each other and go on with their lives.

Ten years later, Adam has decided to join “TransWorld” as a scientist, the only building/company that attaches both planets in one miraculous building. He has been working on a special powder/cream that is anti-aging, or at least anti-gravity, if you catch my meaning. But really, he is doing it just to get access to the top planet, find out if the woman of his dreams remembers him, and hopefully woo her off of her feet. Figuring out how he can stay on their side of vice versa, without getting jailed is a problem to think about later.

Timothy Spall gets a shoutout here, for finally being in a movie where he isn’t a slimy villain like character. 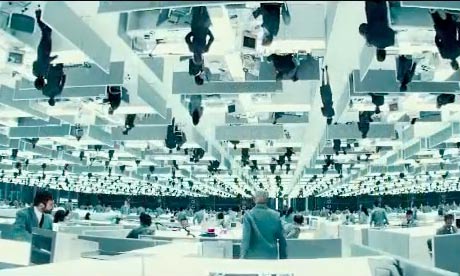 So if you think about it, even Timothy Spall is topsy-turvy in this movie.

I did spend most of the plot outline going over just how the world works, in non spoiler-y terms. Not specifically what Jim and Kirsten actually do in this movie. Why? Well, the actual plot itself is very weak. They spend a good deal of time at the start going over the worlds like I do, and then apparently spend the rest of the movie ignoring their set in stone rules. Incredibly inconsistent with what is going on, numerous plot holes, and they use one of the laziest story writing techniques out there: Amnesia. Ugh.

The climactic ending scene ended up only being confusing, never sure which way was up, down, or who was in danger at any given moment. But it definitely had guns, and definitely had people with very poor aim. The actual end end scene felt cheesy and rushed.

Overall, this is incredibly disappointing. The concept is fucking amazing, with endless possibilities, but this film doesn’t deliver. It has many inconsistencies with the rules and what happens, so the sci-fi nerds will rage over that. The romance is a bit weak, so those romantics will also be disappointed in it.

It should be noted that the film is very gorgeous. It is CGI heavy and they put a lot of work into it. That is the biggest plus it has going for it, which is a shame.

1 out of 4.
Tags:1 out of 4, Jim Sturgess, Kirsten Dunst, Romance, Sci-Fi, Timothy Spall, Upside Down