Strange as it may sound, to properly start this review I need to talk about The ABCs of Death. If you have never heard of it, it is a horror anthology movie (all the rage these days) with 26 shorts, one for each letter of the alphabet. They have free reign to do basically whatever they want, to match up any word they want to a particular letter. It is an easy way to make a movie, as each director is only involved for a short while and can be done on almost any schedule.

So what does that have to do with Turbo Kid, a retro inspired sci-fi adventure horror (eh) movie?

Well, it turns out that this was inspired by a short made for the anthology that was eventually not used: T is for Turbo. Although it didn’t make it in the film, one of the producers decided that it would be even better as a full feature length film. So they brought Jason Eisener, who directed Hobo with a Shotgun (a movie I still have never watched, sadly), to be executive producer and Turbo Kid was born! And yes, you can watch the short if you click on the title link above. 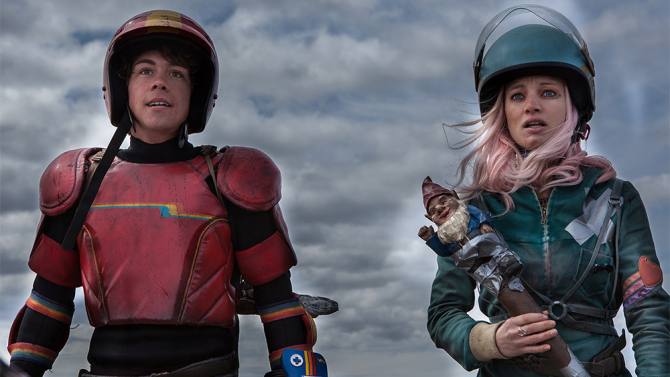 You see that? That is a GnomeStick, and it is truly wonderful.

The world is in shambles. The land they live in is now referred to as The Wasteland, and of course it is a post apocalyptic world. The future is a scary place, the year is 1997.

Our hero is named…well, no idea, so let’s call him The Kid (Munro Chambers). He is alone, a scavenger, just him and his bike. He is also a lover of comic books! Who isn’t though, right?

Well, this Kid meets a girl, despite trying to avoid strangers. Her name is Apple (Laurence Laboeuf), she has pink here, is very eccentric, and doesn’t seem like the type of person who could survive in The Wasteland alone. She just wants a friend, and the Kid reluctantly lets her tag along — only if she follows his rules and gets a weapon!

Eventually the Kid finds a cool suit that is straight out of comic books, and when he puts it on he gets super powers! Okay, he just gets a laser cannon gun thing on his arm, that has a timer after a few uses that lets him recharge. But at least it looks cool and snazzy. More importantly, it gives him the confidence to start fighting back.

Fighting back against Zeus (Michael Ironside), self proclaimed ruler of The Wasteland. He has an army of warriors, including Skeletron (Edwin Wright), who shoots out rotating saw blades, and Female Guard (Orphée Ladouceur), who is a woman!

But the Kid isn’t alone, no. He has the help of Frederic (Aaron Jeffery), an Indiana Jones looking mother fucker who arm wrestlers, until he loses his hand early on. And also there is Bagu (Romano Orzani), a trader who was the only friend the Kid had before this mess gets started. 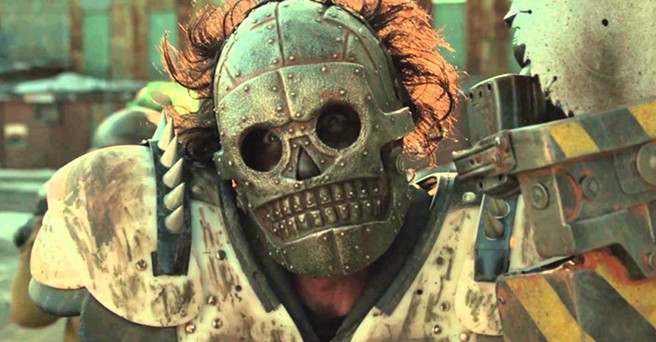 When Metal Man and Skeletor have a baby, you get this lovely killing machine.

I feel like I was transported back into my 1980’s going to see sweet B movies live for the first time. This is of course ridiculous, because I was born in 1989 (Like Taylor Swift. We are both successful people), and I have no memories of being zero or watching movies. It is a ridiculous statement for me to make, and this entire paragraph is down right nonsensical, which makes it a perfect description for Turbo Kid.

I joke a bit, of course. There are character motives, a plot, everything that is necessary for a movie to be comprehensive. The world created is just over the top and very Mad Max-ian. It can easily be pictured as a movie in the franchise, just with a much smaller budget and a kid with lasers as the hero. Fuck it. George Miller needs to just somehow make it canon and everyone would win out in the future if they can eventually crossover.

There was a lot great with this movie, outside of its intentionally bad graphics for the death scenes. The soundtrack is straight out of the 80’s and gives the best vibes possible when watching this movie. And they were very creative when it came to costume (and hair!) designs, weapons, deaths, and sets. It was a visual rainbow explosion, despite the bleak landscape.

The cheese is high with this film and it runs with it. This is why I hate the bad on purpose films like Sharknado so much. Because there can be actual movies that are bad in a good way, like Turbo Kid, or Black Dynamite, that serve as genre parodies while also entertaining people without the use of alcohol.

This review deserves a third picture just to showcase some great costume design or something. 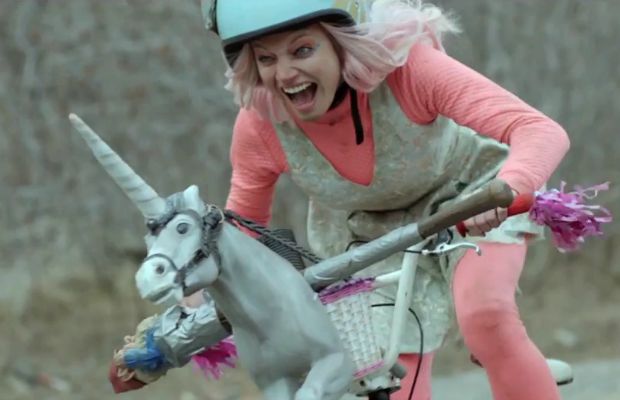