Turbo is the latest example of a kids movie following a very standard formula. Let’s take some sort of entity and either a) give them an impossible dream (and reach it!), or b) give them some ridiculous flaw (and overcome it!). Like a bird who doesn’t know how to fly. Or a plane that is afraid of heights (and wants to race). Or an overweight comedian who wants to box. Or a snail who wants to race in the Indy 500. Oh wait, that one is Turbo! 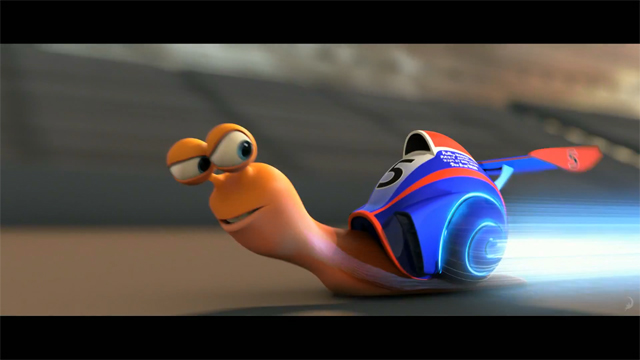 Fuck. Let’s get this over with.
Turbo (Ryan Reynolds) is a snail! He has big dreams. He wants to go fast, and is the fastest snail he knows. In fact, he just did the yard in 17 minutes, a new personal record. He dreams of entering the Indy 500, thanks to words of advice from his hero Guy Gagne (Bill Hader), who claims that no dream is too big. His brother Chet (Paul Giamatti) thinks his dream is stupid, rightfully so.

Well, eventually Turbo falls into a car engine and gets coated with NOS, transforming his DNA and giving him incredible speed! This also somehow turns him partially into a car, with headlights, radio, rear review lights and stuff. Not sure how that second part happened. Even more eventually, Chet and Turbo find themself caught by Tito (Michael Pena), a down on his luck Taco maker. He works for his older brother (Luis Guzman) and their business is not doing well. Why did Turbo decide to not run away as soon as they were captured? No idea. But he could have.

Luckily, Tito is all into snail racing. Turns out Turbo is stupid fast and he wants to use Turbo to get more business. A very noble cause. So they set off to enter him into the Indy 500, for exposure. Nowadays kids would just make a YouTube video and become famous that way. 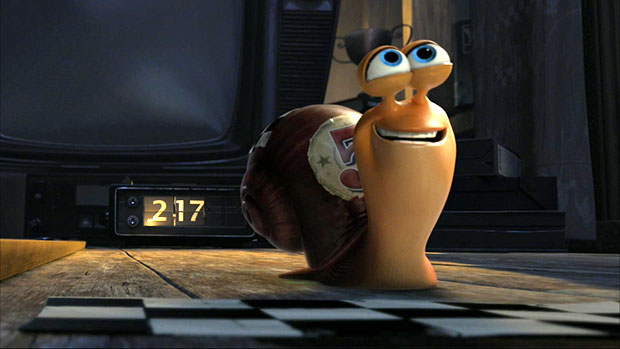 This movie is about to get fucked. Seriously. No mercy. Cover your eyes if you don’t like violent imagery.
Let’s start with some factual errors. Why? Because they matter to me. I am a Masters Geophysics Student, and the sloppiness bugged me. Basically I am going to be super critical.

Turbo made a big deal about getting a yard in 17 minutes. I know it was a yard, because they showed the measuring stick briefly. However, 36 inches in 17 minutes is really slow. Like, really really slow. That is why I went over to WolframAlpha to convert it. Seriously check the link.

WolframAlpha is so amazing it compared the velocity calculated to the the velocity of a garden snail automatically and it is about 33% the speed of the actual garden snail. Great, we have a snail that is statistically slower than most garden snails. Let’s say that factual error can be ignored, fine. Unfortunately, almost every other point in the movie (pre-genetic manipulation), Turbo and other snails are still shown with greater velocities than his trial. Unless it was important to the plot that is (see: the tomato/lawn mower scene).

[Editor’s note: Apparently IRL and F1 are different things, but similar vehicles. I just know them as “Not NASCAR”. Point still stands, basically.]
The ending bugged me a lot as well. As it is a car race, it involved a pile up of cars real close to the finish. At this point, Turbo and Guy go into a “foot race” type of situation for the finish like, similar to Talladega Nights.  But according to official Formula 1 racing rules (here and here specifically), none of it would count and the whole thing feels pointless.

Let’s get to the most important part of the movie. This plot is inherently stupid and bad. I didn’t read the full rules for the Formula 1 racing, so I can’t confirm if there is no rule that would disallow a snail. However, the concept behind it can only be described as cheating and a snail would never be allowed to race in such an event. They have very specific standards for the size of the vehicles, type of protection they need, everything you can possibly imagine. The snail’s dimensions do not match a car’s dimensions. For an extreme example, it’d be like using a Ferrari. Or like doping.

At one point during the race, the announcer screams that he can’t believe Turbo is passing a car from below. I am fine with his reaction, because Turbo is basically cheating. But the announcer is surprised instead that he could fit, even though Formula 1 cars have about 4.5 inches of room underneath them, while a garden snail is at most 1.5 inches tall.

If you hadn’t figured out by now, Guy is the villain of this movie, but only because he wants to win the race too. Just like the other 30ish humans in the race, all doing it without cheating.