Pitch for this movie: “You know how we like to have former wrestlers, or action people, do emasculating things for our entertainment! Well what about a Tutu?! But not a Ballerina…a Tooth Fairy maybe!” 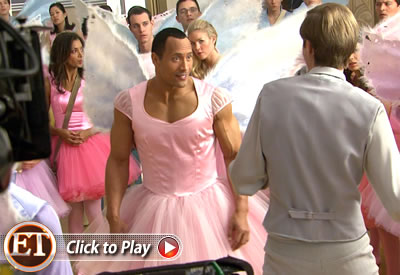 Surprised actually that the whole movie isn’t just him dancing in this. For 90 minutes.

Dwayne Johnson plays a hockey player. Hells yeah! But not in the NHL, the “Lansing Ice Wolves”, a make believe team that is a feeder team to the LA Kings. He used to be good at scoring and stuff, but in one fight he knocked out some guys teeth. They started to call him the Tooth Fairy, and then he turned into a large defensemen who hits hard and fights hard.

He is dating Ashley Judd, who has two kids. Because kids don’t scare him! But he does kind of tell the daughter the Tooth Fairy isn’t real, for gambling monies. So he gets a summons.

And bam. Tooth Fairy world. Oh he is being punished for making people not believe? They use their belief to actually do magic, fly, and tooth fairy stuff? Stephen Merchant is his fairy case worker, has no wings, and Julie Andrews is the head fairy, punishing him? That’s crap. He has a couple of weeks of fairy duty, in which when beckoned, he must show, sprouts wings, costume and everything.

So he has to deal with his punishment, using a big bag of tricks to get the job done, while also trying to not screw up his love life (relationship with not his kids), and maybe get his hockey career back on track, from thug to stud, before some young wanna-be Crosby takes away all the attention he used to have.

Now assuming this movie is good, it is about getting your life back on track, and hockey, and magic. Hopefully they don’t try to ruin it with some direct to video sequel. 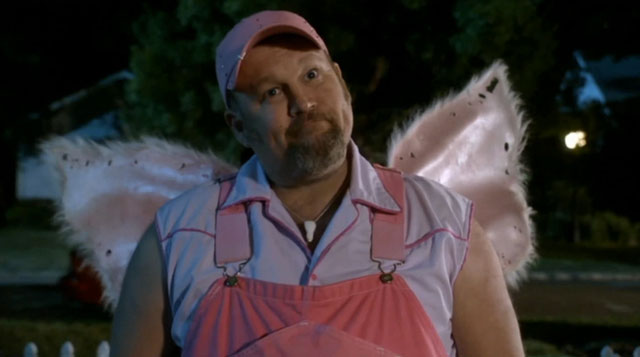 But was it good?

I have a problem with movies that claim certain things are real, despite the characters best wisdom. If it was a kid discovering that Santa was real, that can be fine. But if it was a parent discovering that Santa was real, despite years of placing out presents pretending to be Santa…does that make sense to you? Same situation with the Tooth Fairy. They put out the money themselves, and even replaced it one The Rock took it. Clearly there was a precedence of them always placing money for teeth. Yet also there are tooth fairies that do that for real, and somehow the parents also do it?

Fuck that noise. In movie watching we call that shit nonsensical and a plot hole. I can accept a world where the tooth fairy, magic, Santa, big foot, all that exists. I cannot accept a movie where they exist, and characters actions contradict their existence.

Although there was amusing moments, for sure. Watching the Rock get the teeth was entertaining, I will give you that. But even the hockey moments, of which they are numerous, was iffy. If you know the rules of hockey, the games don’t make sense at all. Penalties on fair plays, and bad plays no calls. And they aren’t that many scenes. So that inaccuracy just seems silly, especially since they try hard to get even names of the actual Kings at the time right.

Alright. The amount of plot holes and inaccuracies just ruined it overall for me. Easy fixes too. But Billy Crystal‘s two scenes were hilarious.