Lara Croft first entered our lives in 1996, with giant pointy boobs, and a woman hero that has never been that defined ever in video games. Them polygons.

A strange video game feminist and sex icon, she raided the fuck out of tombs, and in some versions of the story, fucked the raiders in the tombs. It led to more female protagonists, more hybrid shooter puzzle games, and was a real win for the genre defying starlet.

Well, many years later they decided to reboot it a bit. They had Lara change her body type and her motives, and we got more polished games, more puzzle focused, but with a strange and many easy ways for her to die terrifying deaths. Not as bad as Dragon’s Lair, but relatively similar.

So why not also have a movie reboot as well? A new Tomb Raider. Get someone up and coming, get her in her first real action movies, and get her on the big screen. 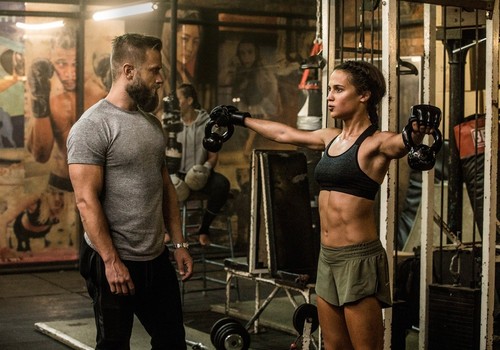 Oh, and get her some abs and some muscle.

Laura (Alicia Vikander) grew up in the lap of luxury. Her father (Dominic West) was basically this perfect specimen of a man, who treated her well, trained her to be a model citizen, was into charities, being rich, and of course, cultural secrets. You see, he was sort of absorbed with the idea of finding a missing tomb of an ancient Japanese queen who was said to bring death to the world. Why did he want to find it? Well, it is a goddamn challenge, lost in history. That’s why!

But when he left on that fateful afternoon, he never returned.

Now, many years later, Laura is working, being athletic, doing things, but refusing to sign the papers acknowledging that her father is dead. No, he must be out there. If she signs the papers, she inherits the fortune, but she would rather struggle on the street and hope than admit to his death. She would rather starve, damn it.

Well, eventually she almost signs it, so she is given a puzzle key and that leads her to a secret message from her father. Following the clues, she is led directly to his research, with information on where he went, his goals, and learned about a bad organization and what they wanted to do with that information.

Oh no Laura, what are you going to do? Follow your father’s wishes and destroy all the evidence? Or go on a trip to complete his mission once and for all? Well, we know the answer to that one.

Everyone knows that girls like to play with bows growing up. In and out of their hair.

The original Tomb Raider film was pretty okay. For the 12 year old budding reviewer, it was beyond everything I had hoped for, well, almost. The sequel I didn’t watch until years later and don’t really recall much about it.

If I had to describe this reboot in two words, the words “pretty okay” would be perfectly acceptable towards this film as well. If you want action/adventure, you will get a decent amount of it. Most of it takes place after she leaves London of course, outside a thrilling-ish bike race scene. It seems that after we got to the island, a scene where she escaped capture seemed to last for fucking ever. I was just waiting for her to finally die, or just get caught. Of course neither would happen, but I knew those scenarios would finally let the movie chill out a bit.

The ending parts with the tomb really didn’t let the movie shine. A lot of silly things occur, with puzzles that don’t feel smart or anything, just inconvenient. I want the obstacles they overcome to be actually well written is all.

Overall, there is a lot of hope for this movie. Vikander does do a wonderful job as the new Lara Croft, I believed in her ability to do awesome things. It is still a bit cheesy with mostly lazy thrills and stunts though. An adrenaline junkie might have a good time, but this is still not the video game movie savior.