Welcome to my 1200th review for my website. Yes, thank you, thank you, thank you. I have had a hard time finding general themes to go with for some of these bad boys. My attempt to do a good milestone review for Trapped In The Closet was met with large yawns. My best ones have been taking arguably well known shitty movies and going indepth over them. Like the Twilight movies.

But more recently I have noticed that a few of my last milestone reviews have been live action remakes of child hood classics that have left the fans angry or confused. Namely, Dragonball: Evolution and Speed Racer. So why not the reverse?

A CGI “remake” of live action child hood classics? Namely, the 2007 TMNT. Sure, there was cartoons too, but the movies were hugely successful and everyone I knew watched them.

How many people did I know that watched TMNT?

The same number you see here in this picture!

Just kidding. This movie doesn’t start in the Big Turtle. We are going to Central America, where April O’Neal (Sarah Michelle Gellar) is looking for some artifacts. That is what she does now. Looks for relics for rich people, because fuck journalism. She hears some rumors and lo and behold, that sneaky sanchez Leonardo (James Arnold Taylor) is out and about. Apparently he was sent down to work on his leadership, by Spliter (Mako) for some reason or another.

I heard it was cause some guy was running around NYC with a mask and fighting crime, not the turtles! 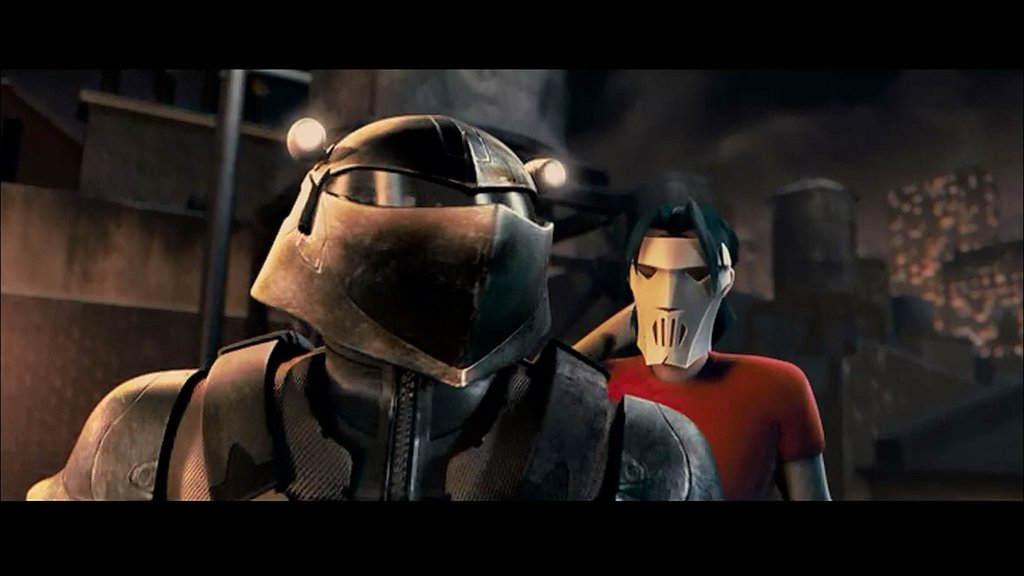 Oh shit, there are two people running around with masks!

What are the rest of the Turtles doing? Well, not a lot. They beat Shredder some point before the movie, so they have free time. Donatello (Mitchell Whitfield) is working from home as an IT specialist. Michelangelo (Mikey Kelley) works for kids birthday parties where he gets beaten with bats! And Raphael (Nolan North)? Well, he sleeps all day and does nothing.

Because he is roaming the streets at night as Nightwatcher battling crime. 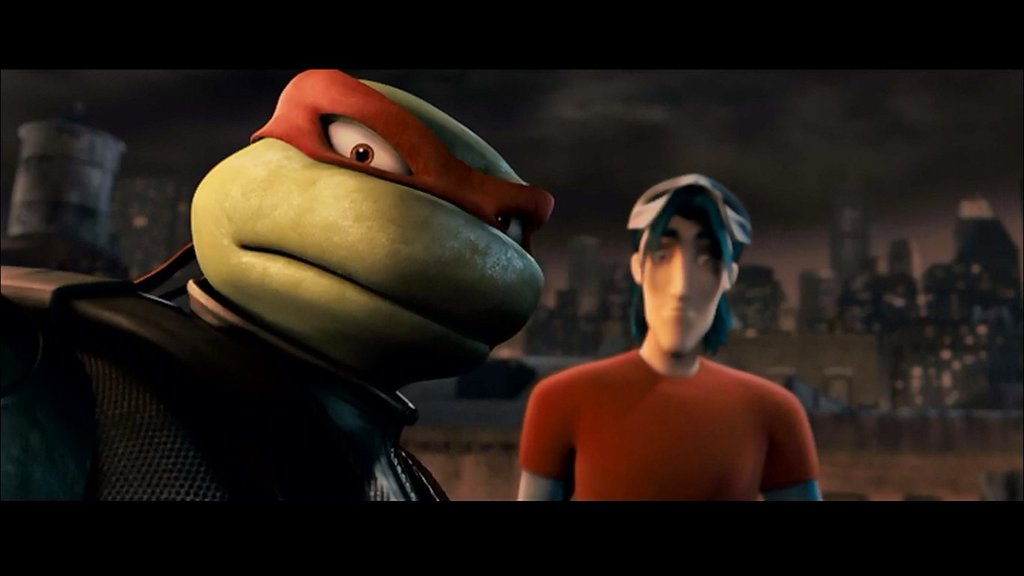 April is working for this man, Winters (Patrick Stewart), who really loves statues. Just kidding, Winters is secretly this ass hat Yaotl, an immortal being from 3,000 years ago in the Aztecs. He opened up a portal to another universe to get his power on, making him immortal, but his generals were turned to stone. Then, after that, 13 immortal beasts come out of the portal and fuck up his enemies and his own armies. Everything is lost. He is not an immortal being, his staff are stone, and he kind of wants to open the portal again to get some more shit done.

So the ancient relic was actually a stone statue and one of his generals. Aw yeah. Time for shenanigans.

He actually is able to use his future tech rich company to make them alive again! But they are still stone. Awkward. Doesn’t matter.

In order to bring some relevant Teenage Mutant Ninja Turtle action into this movie, they have the foot clan! No longer led by Shredder, cause Shredder is gone, but now ninja Karai (Ziyi Zhang) is running things. They were hired to find and contain the 13 mythical beasts.

Apparently they have been running amuck on Earth for the last 3000 years and no one noticed? Really hard to say.

Well, Leo returns and they are told to stay hidden until they can be a team again, so they don’t. They find one of the beasts and a foot clan, help and then get knocked the fuck out by some stone generals who appear. Awkward. So they are forced to stay put this time for serious. Except one team member refuses. 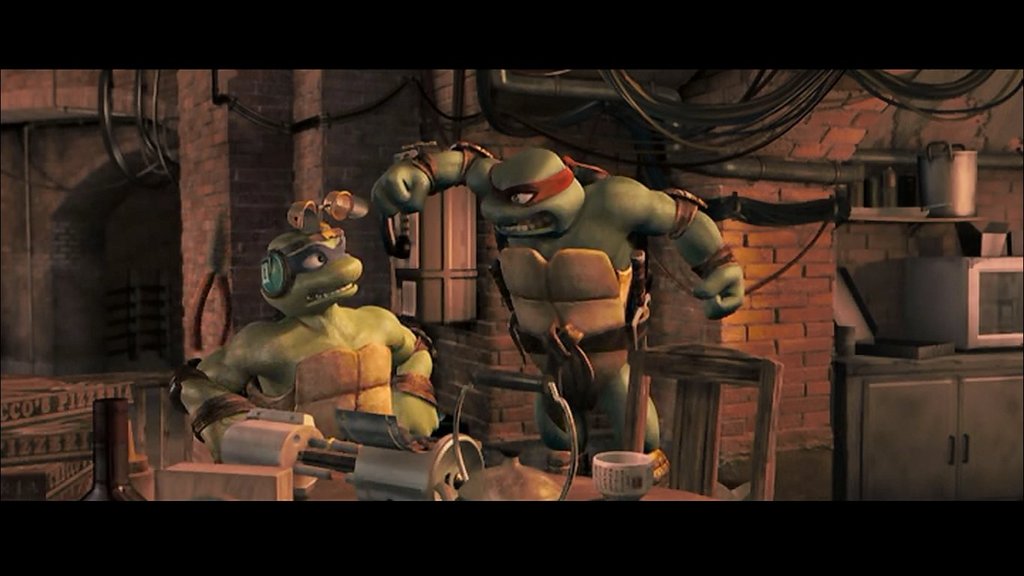 And he is an angry one, that Ralph.

Nightwatcher goes out and Leo finds him. He doesn’t want Nightwatcher to be a vigilante. So they fight, shirtless, in the rain, and HOLY SHIT IT IS RAPHAEL.

Through the fight, Leo gets captured by the bad guys and Raphael feels totally bad you guys. Especially since the bad guys might offer up Leo as a sacrifice to the portal in lieu of one of the monsters. All sorts of fucked up there.

We already went over this. Bad guys gonna be bad.

Except not. This Winters/Yaotl fellow doesn’t want to wreck havoc. He wants to stop being immortal and free himself and his generals. But the generals? They like being immortal, and they like even more their powers and movement. So, despite Winters actually secret good intentions, they aren’t down with it and want to get their fight on.

So the Turtles, April, and Casey (Chris Evans) (Who I don’t feel bad not mentioning until now), along with the Foot Clan show up to help save the day. They have to find the last monster, defeat new monsters, defeat generals and hope the shenanigans are stopped in time!

And of course they do. They are able to find the last monster and have it push itself and the generals into the portal, which is sealed forever. Yay, fuck those generals.

Not literally nor all at once.

Welp, day is saved, everyone wins, and time to go home.

So I guess I can start talking about the film now?

Like the recent live action version,this film does stay true to the general characters, their attitudes, and made them feel individually cool. Because it is animated and not the 1990s, they were able to actually use their weapons. And the fact that it didn’t get bogged down with an origin story is awesome.

However, outside of those things, most of which are expected, there was only one entertaining scene in the whole film. Just one. The rooftop battle between Leo and Ralph in the rain. It was super sexy and a bit gorgeous.

This picture does it justice, just doesn’t save the film.

The humor was shitty, the CGI outside of that scene felt old, even by 2007 standards, like a very cheap CGI TV show.

I am fine having a plot without Shredder, really, but they picked such whogivesashit villains with a lot of pointless attributes that at no time is it exciting, nor is it ever really sensical. I remember the cartoon. Give me that giant dude with the brain storage in his stomach. That guy is cool. These guys are not, especially when the main villain isn’t even a villain either.

Even kids would be bored with this movie, and it is flashy animation.

The recent remake was not a great thing for this series, but this CGI version was an even worse slight to the franchise. I bought a bootleg version of this film in Greece from a Nigerian in 2007 and forgot to ever watch it. I only picked it because I knwe it was still in theaters. My 2007 self knew it would be a disappointment. And now all of you do too.