A live action movie about The Smurfs? How can that smurfin’ work? That doesn’t make any smurf sense. But, by the end, it was definitely pretty smurfy. 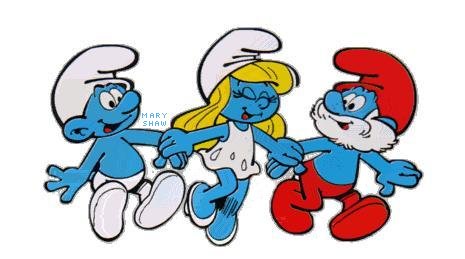 Oh don’t worry, I am done doing that.

I won’t explain the back story of Smurfs. Should be pretty public knowledge. But in their magical world, before the Blue Moon festival, a few of the smurfs accidentally get transported, along with Azrael and Gargamel (Hank Azaria)! They must figure out how to return, and you know, not turn into magic juice.

Also! Neil Patrick Harris and Jayma Mays are expecting a baby, while NPH has to make a new ad design for the cosmetics company he works for and his boss Sofia Vergara (from Modern Family).

This movie (or at least NPH) ask a lot of questions normal people wonder. Like if they are named after their major personality, do they get a name later in life, or born with that name. The movie answers the question, kinda.

In terms of CGI, it is pretty good. They fit the smurfs into the real world very well. Nothing (too) cheesy, and I was able to believe it. 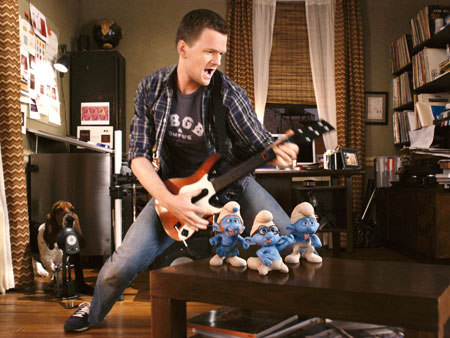 NPH and Jayma were fine. Azaria made a GREAT Gargamel. I was hoping for Danny DeVito to be him personally, just on looks. But Azaria just had it all going for him. Also, super cheesy. But you could hear the Moe Sizlack in his voice. Also interesting.

Story line was also interesting. I was entertained throughout, which is really all you can ask from a family centric movie. There was enough subtle jokes in there too for adults to enjoy as well.

I was going to watch this with “Smurf-O-Vision” too, as it was advertised. With an iPad/iPhone, you could download an app to go with the movie. It made it seem like if Smurfs would fly off of of screen, they’d fly onto the iPad, and other weird things. A new dimension of fun! But what really happens (I tried this for 5~ minutes, app took forever to load too) is a bunch of stupid things. Also it ruins the movie. In this version of the movie, the main smurf cast are also watching, and often the screen will shrink and you will see their reactions too. I was like “okay, as long as it doesn’t ruin the movie”. But then once it shrunk again and the director appeared and talked over dialogue, I was immediately done and calling it a failure. Just meant as a way to distract kids more so, I think.

Besides that, the movie is smurfy.