You know what sucks? Getting pregnant. Yes, not being pregnant, but getting to that point. I can tell you I have never been pregnant, and probably never will be pregnant, so I have to assume it is a pretty hard task to accomplish.

So why not make a movie about that, and little kids popping out like plants. Why not tell us about The Odd life Of Timothy Green? 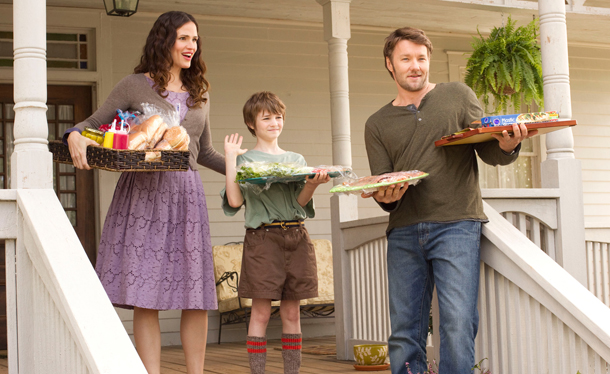 “Oh shit, its hard to hold all these morals! They are dropping everywhere!”

The movie begins with Cindy (Jennifer Garner) and Jim Green (Joel Edgerton) at an adoption agency? Apparently it involves a lot of forms and an interview to plead their case. Under prior experience they have just “Timothy” listed, so now we get a flashback movie! Kind of a bummer, because it then kind of gives away how it ends. But eh, family movie.

The actual story begins with Cindy and Jim finding out they definitely can’t get pregnant. They spent a lot of money, but it won’t happen. Probably Cindy’s fault, who knows. Instead of moving on, they decide to have one drunken night, fantasizing what their kid would have been like. Funny, good at some sort of instrument, not athletic but will score the winning goal for a big game, lover of love, etc. They put this all in a box and bury their son in the garden. What’s that? Freak rain storm? Only over their house!

Hey look, a naked muddy boy is now running around in their house. Dude also has leaves coming out of his legs. That’s more normal. And his name is Timothy Green (CJ Adams). That is their last name! He is a plant with the last name of green. ARE YOU UNDERSTANDING THIS PEOPLE? MAGIC MAN, MAGIC!

Well, after a lot of awkwardness, they decide to not call the cops and just you know, have a son. Too bad they have a giant family picnic the next day and surprise, a kid! Hey, even Jim’s disapproving father (David Morse) showed up, but mostly to terrorize the kids. Cindy has her successful sister (Rosemarie DeWitt) with her multiple successful children also showing up, being all successful and shit. What a bitch.

Either way, Timothy quickly falls head over roots in love with some Joni (Odeya Rush), a girl who is a bit alternative. But hey, friendship. Because we all know what is going to happen to Timothy soon. That is right, he loses a leaf. Interestly enough, he has as many leaves as there were papers in that box. He lost a leaf as soon as he was able to make that uncle dude laugh, and they did want him to be as funny as that uncle dude. I wonder what could happen when all of the box is fulfilled and his leaves lost?

There is also the plot line of the town pencil factory going out of business, and maybe their boss (Ron Livingston) stealing Jim’s idea to save the plant! Oh, and everyone’s favorite actor/rapper with an annoying name Common plays the soccer coach. 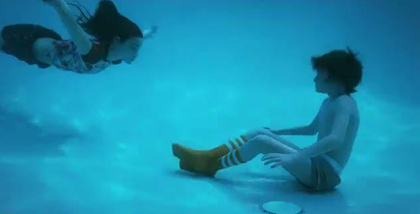 That is why that asshole is wearing those socks. Covering up leaves and shit. So now he is the asshole swimming in socks instead. He should fit right in.

Basically, this was your typical family movie about discovering yourself, and a magic entity in your life, albeit temporarily. Laughs are had, lessons learned, and what it means to be a good human. I think.

Despite all that, I guess it was mildly entertaining. The movie also monkey paw’d me right in the throat, and I did not see it coming. Honestly, once I saw their box of attributes each represented a leaf, I immediately knew a few scenes that would happen. But maybe they don’t happen the way you expect em too. They might even have all this build up, just to fuck with you. Totally monkey paw’d.