Bask in that position while you can, The Nut Job, because your time on top will fall. It will cascade downward into oblivion, becoming worse and worse as the year goes on, until May. At that point, Legends of Oz: Dorothy’s Return comes out, so it will take the last spot so that you will have some shoulders to climb on. There you will be the second worst until July, in which we see Planes: Fire & Rescue. Whether or not you end up better than the “third worst animated film of the year” is left up to debate. But as of right now, thinks are not looking good. 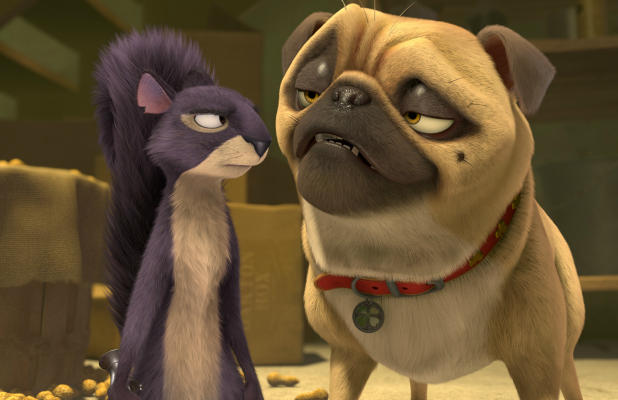 Seriously, those things on the right look like beavers without the tails?

Surly (Will Arnett) is a purple squirrel, and thank everything he isn’t fucking named Squirrel. I mean, it’s still close to it, but its not Squirrel. Hate lazy family films like that. He lives in the cities park, but he is on his own, with his mouse friend Buddy. He doesn’t believe in collecting food for winter with the rest of the animals. No he wants nuts for himself.

Well, after a freak accident, involving a flying nut cart, the park’s food supply gets burned up in a fire. They blame it on him, despite it not really being his fault either. So the leader of the park, Raccoon (Liam Neeson) wants to avoid a trial and holds a vote for banishment of Surly from the park forever. Also, what in the fuck. Damn it, damn it, damn it. Raccoon named Raccoon? Fuck that.

So Surly has a bad time in the city, but he runs into the holy grail of buildings. A nut shop, with nuts! He could live there forever! But he can’t do it alone. Thankfully, due to the food storage, Raccoon has sent out Andie (Katherine Heigl) and Grayson (Brendan Fraser), the Park Hero, to find more food, and they will help! Also there they bring in a mole, named mother fucking Mole (voiced by mother fucking Jeff Dunham, ugh), and some beaver or something. Definitely bigger rodents.

So yeah, breaking into a nut shop, like a classic bank heist movie. But while this is happening, the “owners” of the nut shop are actually working on robbing the bank across the street by digging under the streets. Mob boss, typical story, everything going nuts. Also, Maya Rudolph voices a dog named Precious. 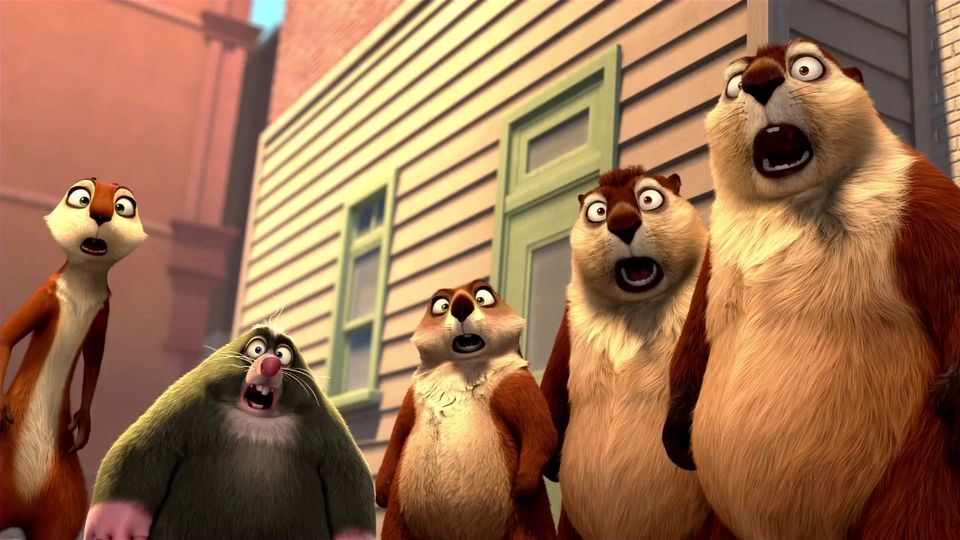 There is so much wrong with this movie, I don’t know where to begin.

Alright, first, the animation. It isn’t the best quality of CGI in any sense. It has its moments, but mostly it feels like a very strange…video game feel to it? Like they had no heart in the animation and it was something that they had just lying around. I don’t even know how to describe it. It never felt great to me though.

The puns. I like puns. But there are only two groupings of puns here. Referring to things as “nuts!” over and over again. And the Mob Boss talking about how much he hates “rats.” They can be clever, but they both get overused to the point where it doesn’t matter anymore.

The idea of the plot is a good one, but it barely followed any part of the traditional heist movie format. All of the plot is through miscommunication and people being dicks to each other. I am a bit happy to hear Fraser say “Shut the FRONT DOOR” in a PG movie though. That was a bit surprising.

Movie is full of random other bullshit that I noticed. For instance, the bank is across the street from the park. We learn that early on, because that is why the nut cart is there, for surveillance. But also, the nut shop is across the street from the front of the bank too. Some how. What? Fuck you. Makes even less sense when they show the people going on a long journey to stumble upon it, when it should be visible from the park.

More inaccuracies. A dam gets blown up that leads to the city. Explosions, cracked walls, big danger. Doesn’t affect the city at all. The water goes in two directions, one down a lazy river to the park, the other goes down a HUGEEE waterfall where we assume people/animals died. Surly goes down the dangerous waterfall, yet somehow that brings him…back to the park also. Geographically inconsistant.

They have major plot points that are either obvious, or used in terrible unclever ways (re: everything related to the dog whistle).

It was a mess of a movie.

As a side note, people who forgive a movie for being lame might say “Hey, it’s a kids movie, you are being too hard on it!” Kids movie should not be an excuse for poor quality. Pixar proved that a long time ago. Unfortunately, the theater was packed when I saw this. Many families. So many kids. Rarely did any of them laugh. Yeah, a shitty kids movies that kids don’t even enjoy.