The Messenger is a movie by those Oscilliscope people. If you know anything about bad DVD cases (And Blu-Ray) you know these are some of the worst. Complicated fold out mazes, and in the middle you put the disk in a sleeve. Gross. And different. I hate different. Also some of their other movies I have loathed (Meek’s Cutoff), thought were Okay (Howl) or thought they were wildly original (Rare Exports). 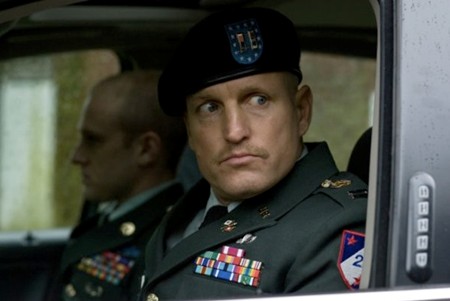 Ben Foster (Who you may remember as that annoying character in Six Feet Under or the lame character in the Worst X-men Movie) is in the army. But he got injured in the war! He is young and only has a few months left on his original enlistment, where he plans on probably leaving. But hey, since he is back home, time to get back with his old fling Jena Malone!

Oh. She found someone else during it and is getting married. Well shit. Oh well, he is leaving the army soon. Not like they will put him in a high pressure job like killing people right?

Right! Its the opposite! He gets assigned to the Casualty Notification Unity for his area. Aka the guys who get to go to the house and tell someone their loved one died in combat. Well. Damn.

Not his ideal position. He has to work with Woody Harrelson who has been doing it for a long time and is in the AA. Easy enough rules to follow. No contact with the people they are talking to. Have to make sure the word killed or deceased are used, to avoid confusion, and can only speak with the assigned person. No neighbors, no friends. No dawdling/waiting. No midnight calls. Etc.

So by now you will realize, man, this is going to be a sad movie. And it definitely is. We get to see them make quite a few calls to quite a few different types of family members, spouses, parents, etc. We get to experience their reaction to all of the civilian reactions. One visit they go to is Steve Buscemi, who does not take that news well. They also meet Samantha Morton, who is now a single mother. And for some reason (probably losing his ex), Ben Foster seems to develop feelings for.

If you think that is fucked up, that is because it is. Starting to like someone after telling them their husband died? Yeahhh. No way it works out. 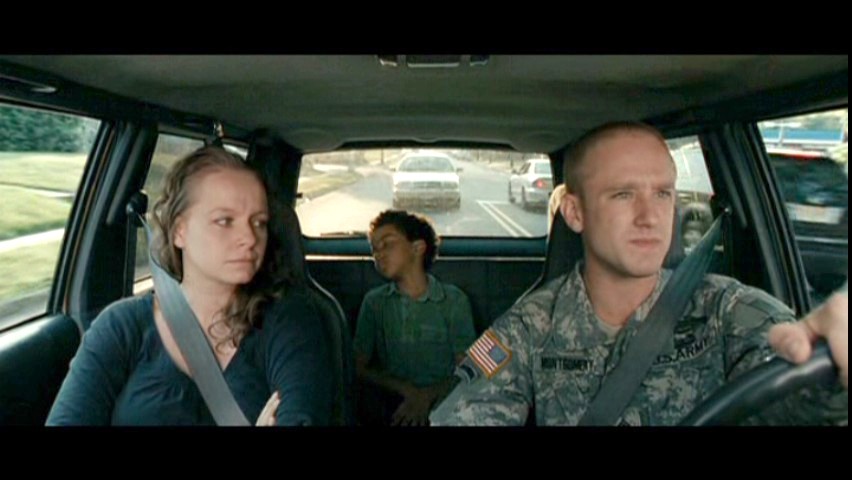 But hey, free temporary taxi is part of the service?

Besides the sad, its obviously pretty emotional. Just watching the reactions from the parents and loved ones at the news, and en route to receiving the news is probably worth the price of admission. Receiving the news sucks, but being the guy to tell the news can’t be the best job in the world, and this movie gives an interesting perspective that is pretty widely overlooked.

Foster is the main guy, but I think Harrelson’s performance overshadows him. You can tell that the years of the job have really wore the character down, along with the guilt that other people put their lives on the line, while he is the guy who tells others, his life never in danger himself. Surprisingly very well done piece. Glad I bought it, too bad the Blu-Ray case sucks.