Shit, this movie came out in like, May or so to theaters. Just didn’t come out where I was living in a 60 mile radius. Why not? It is an independent Rob Zombie horror movie. I thought people loved Rob Zombie stuff?

Either way, I found out like a month later The Lords of Salem was already out in Europe or VOD or something, so I quickly bought it and forgot it. A few months later, oh yeah.

I slack so hard some times. 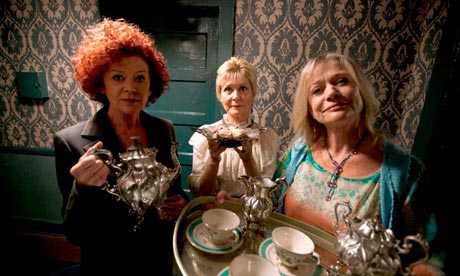 Heidi Hawthorne (Sheri Moon Zombie, wife of Rob) is a local radio DJ in the town of Salem. She is a cohost of the most popular segment in town, along with her friends Whitey (Jeff Daniel Phillips) and Munster (Ken Foree). She personally receives a package in the mail from The Lords. It is a band they never heard of, but they listen to it anyway, and it sort of fucks with Heidi a lot.

So sure, why not play it on the radio? It is a strange eerie tribal chant like noise, with no actual lyrics, just noise. Pretty metal, in that regard. Their guest on the radio that night is Francis Matthias (Bruce Davison), a man who researches the Salem Witch Trials. He really finds the track they play unnerving, and the band name itself, so he goes on a research binge as the side story. The music itself causes all of the women in town who hear it to go into a trance like state. Very odd.

Anyways, long story short. Witches yo. Curses yo. They cursed Hawthorne’s bloodline, claiming it will eventually bring Satan into the world, and the witches will return and take over. Can they do it?! Judy Geeson, Meg Foster, Patricia Quinn all play witches.

My mind is all sorts of wat right now.

Well, this is a weird movie. I haven’t seen any of the other Rob Zombie horror movies, so I can’t tell you if this is weirder than them or not. But it has to be weirder than Halloween. How could have made that one super weird?

I HATE the song by The Lords of Salem so much. It really grinds to the bone, which I guess is the goal. It is just a horrible sound, and I find it hard to believe they would have ever played it on the radio in the first place.

I wouldn’t say the acting is bad in this movie, it is just not an important part to the movie. It isn’t bad acting, it just isn’t good either.

As a certified coward, I can say this movie didn’t scare me in the slightest, just made me feel all sorts of weird. There was very vivid imagery, with low levels of special effects that made the whole thing look cheesy. Grotesque imagery is not what this movie was advertised as, and I was just left mostly confused. No, not of the plot, but confused at why I watched the whole thing.

The ending also is pretty lackluster, not really ending the story, but almost feeling like a strange 10 minute Jazz Fusion set in the middle of a rock concert. What in the what?