Strange. For whatever reason, 750 is a sexier number than 700. Huh. Number talk?

Damn straight. This is my 750th Review! In less than two years as well. 750 means another Milestone Review! I could have waited a week and a half and let another Stephanie Meyer movie take the claim, but I am tired of it, and really, I couldn’t think of that many The Host Jokes. So instead, I went for something that is one of the most hated movies in the last few years, by one of the more hated directors in the last decade.

Oh yes. The Last Airbender by M. Night Shyamalan. The good news is that I have never seen Avatar: The Last Airbender cartoon, so I have nothing to compare it to. That means I can actually judge this movie on its own merits, and not have any previous misconceptions about how it will be! Hooray, honesty.

Here is what I know before watching (outside of the hatred from fans). I knew the children of M. Night loved the show, so he wanted to make this movie for them. He wanted to make a trilogy to tell the entire series, and he, again, was doing this for his kids. Shit, that should be reason enough to not fuck it up, right? 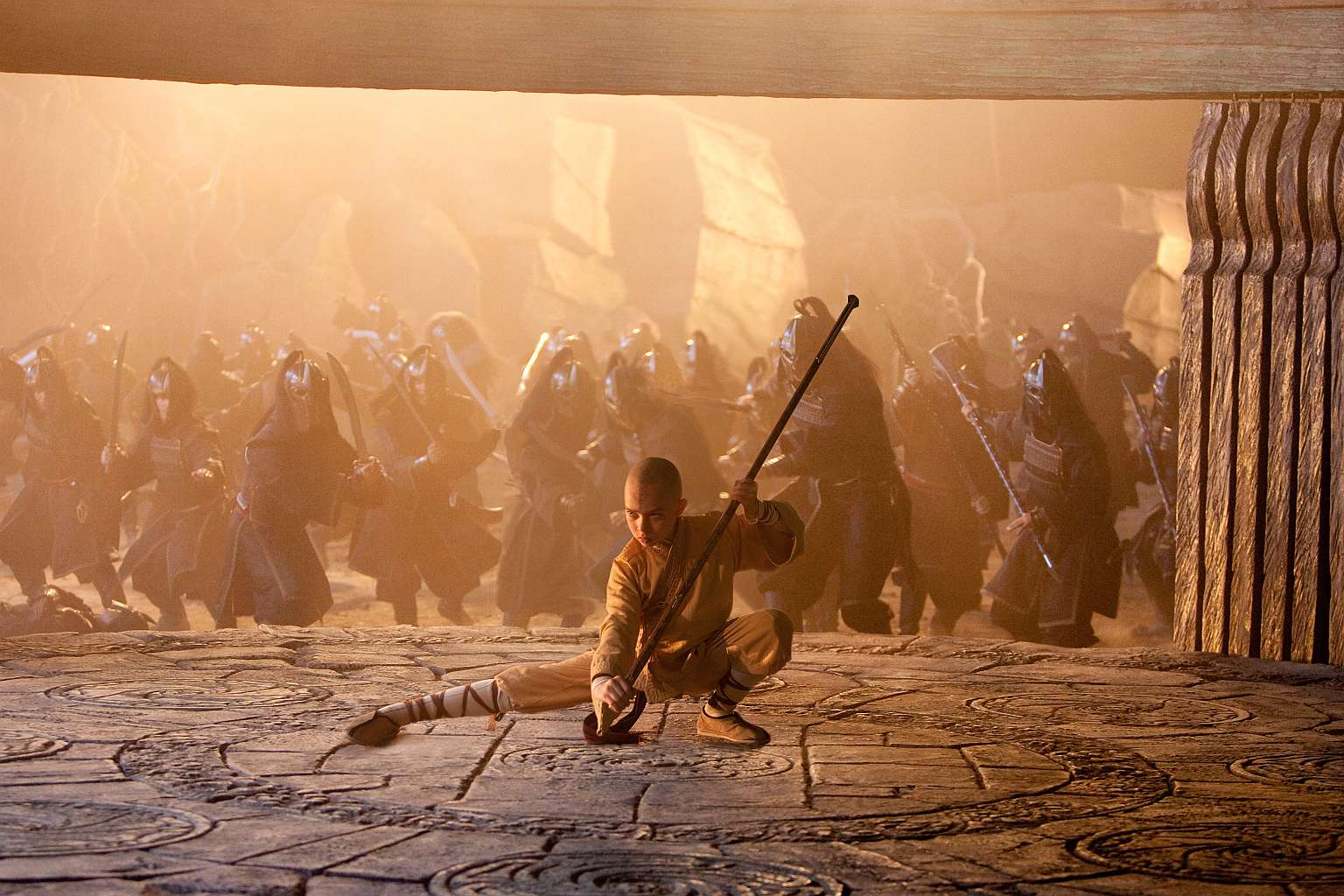 Movie for his kids. Has a kid in the movie. Works for me so far. Let me know more, M. Night!

Alright, complaint number one from the fanboys. White people. Apparently in the cartoon, everyone is some form of Asian, and that is that. Well, that makes sense from an anime thing. Personally, when I see anime, I see most people as White-ish, and I don’t think they care about it in Japan. BUT NO. THIS CARTOON AS ASIANS. THERE NEEDS TO BE ASIANS IN THIS MOVIE. OR ELSE IT IS BAD. Here is a picture showcasing its anger. 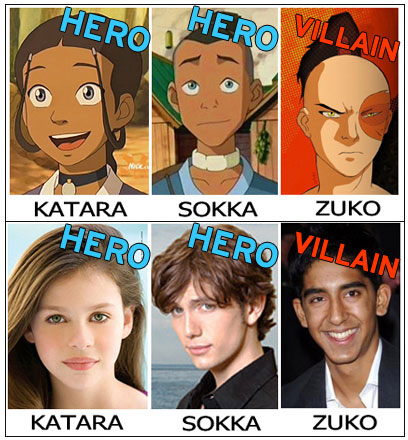 Alright, so this is people overreacting about nothing. In fact, they are saying that M. Night Shyamalan, an asian man himself, is racist, for making certain lead roles white instead of Asian. In case you don’t understand that, I will state it in a different way. Groups of people are saying that certain roles can only be payed by people of Asian decent. If they are not Asian actors, they will hate and potentially boycott the movie.

“Get to the fucking review already, or else I am out of here!” – Loyal reader.

Alright, in this world, lets call it Asia, there are people called Benders. Wait wait wait. First there are four elements, like a traditionally old lame game or show. Of course they are Earth, Wind, Water, and Fire. Water is the bitch element, since there is no Heart. Benders are people who can control these elements and do fun magic like shit with them. They can create said element, but they can control it if its nearby. That makes Earth and Wind the shit in my book, theres always that stuff a round.

Then there is the mother fucking Avatar! He (or she?) can control all four elements, not just one. HE’S A MOTHERFUCKIN’ BADASS. He can do it all, hell yeah!

Too bad that asshole went and died or something, and now the Fire Nation ( a large group of fire benders) took over and went all asshat on everyone. 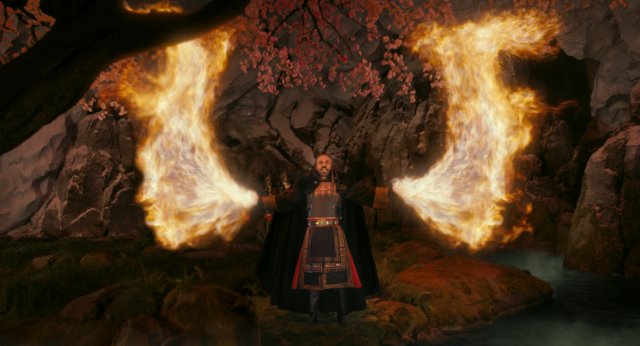 That’s right. We’re talking about you, you asshat!

Well, turns out the Avatar doesn’t die, he gets reborn. So there was a search to find the next kid who could Avatar it up. They have to be an air bender, I think, or something, and well, that is bad. So they killed all the air benders.

All of them. Except one.

And holy fuck I just got the title.

This is my mind now!

Either way, Katara (Nicola Peltz) and Sokka (Jackson Rathbone) are wandering around their Eskimo village, just hanging out. Katara is all water bending, Sokka all, I dunno, regular fighting? Well, they find a boy in a bubble. Kind of fucked up. Also this weird flying thing. 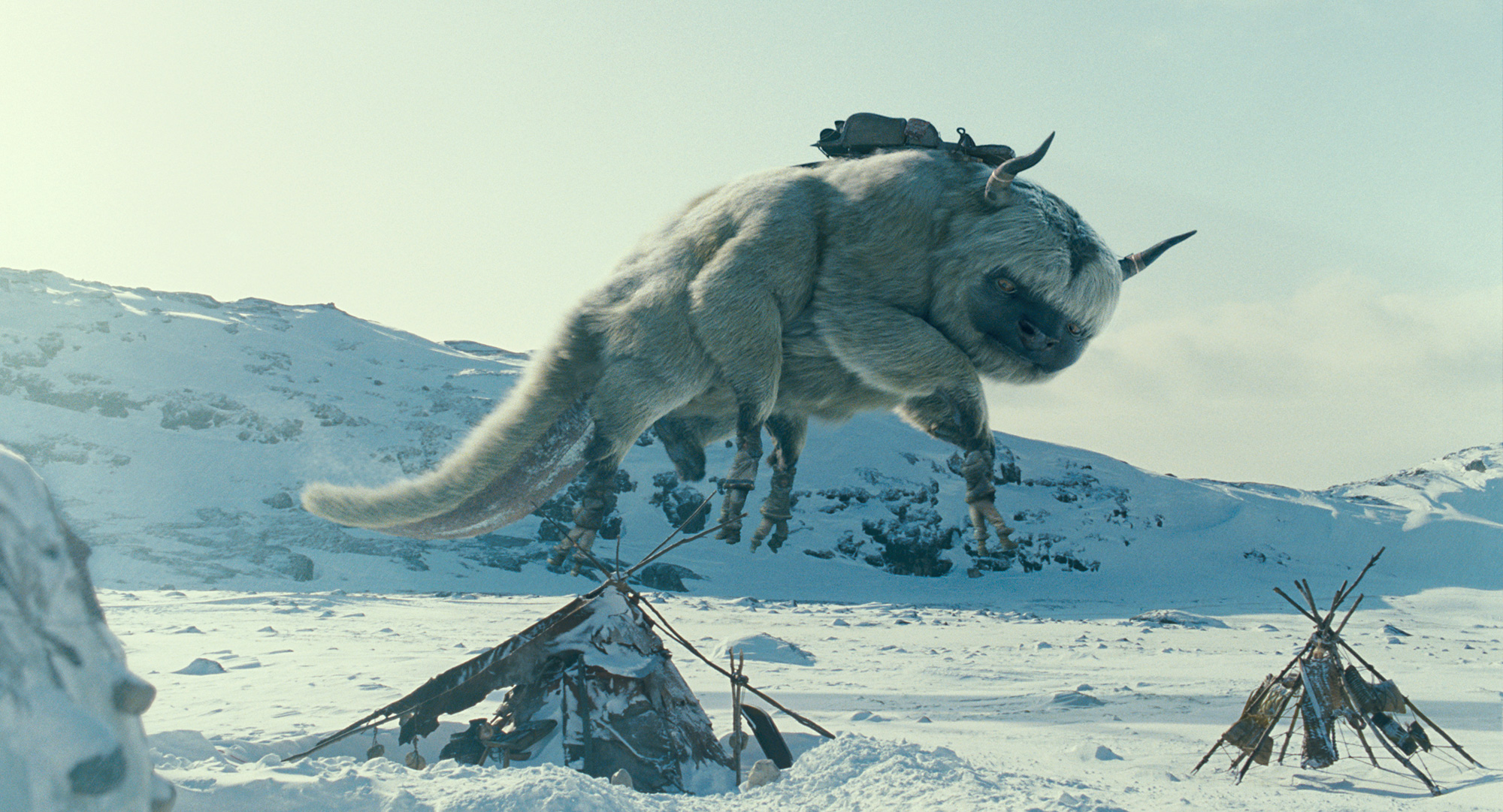 I don’t even know what the fuck this is.

Kid in a bubble, kind of weird. But hey, his name is Aang (Noah Ringer) and I am still not sure how to pronounce it. But hey, they are his responsibility. He wants to get back to some temple, and they just assume he be trippin. But then he is able to control wind. That is rare as fuck! OH MAN, DID HE ALSO CONTROL WATER? MAYBE? Not sure.

Oh hey. Fire nation attacks and totally steals him away. That sucks. Some Prince Zuko (Dev Patel) tests him and finds out he is the Avatar. Great! They’ve been looking for him, probably to kill him. So he escapes. Sad times.

He finds that flying beast and his two white friends, and runs away as fast as he can! Then he is in some Earth Bending place. They are all oppressed, not living up to their rock nature. He leads a revolt, and everyone loves him. Yay! But it turns out he is still a kid and not fully trained. Like. At all. He knows air stuff, and that is it. Water is the next to learn, he was just never taught before being frozen in ice. Whoops! 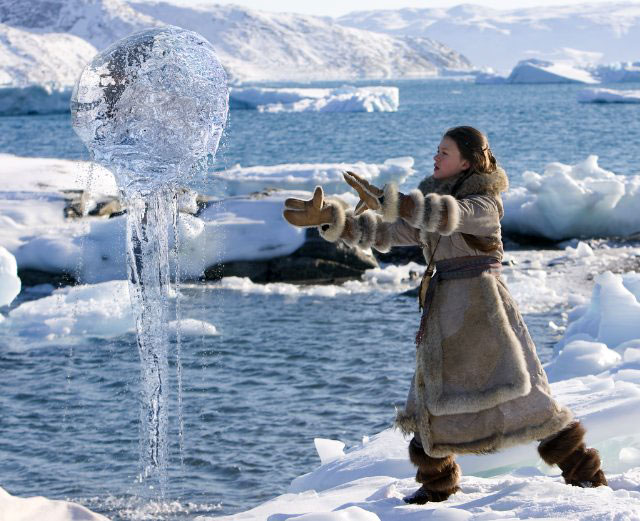 That’s right, this bitch can do something the Avatar cannot! Owned.

So they set off on a journey to some special water temple, so he can learn how to control water like a pimp. You see, it isn’t just a mind over matter thing. They have to dance around with their arms and legs, in a … dance like thing to control it in certain way. Kind of like elemental martial arts, because that’s how fights work in anime. But along the way, he leads a lot more revolts and everyone loves him. Everyone, but the fire temple guys.

They are so mad (and also realize whats happening) that they are going to meet him at the water place. Meet him with a HUGE FUCKING ARMY.

Okay, here is like 10 people. But the ships have more!

Big war happens! Some Princess Yue (Seychelle Gabriel) chick has awesome blue eyes and some sort of special power. The heads of the fire nation are super super mad. We’re talking Commander Zhao (Aasif Mandvi) and Fire Lord Ozai (Cliff Curtis) mad. Do you know how mad that is? Because I don’t. Fire Lord sounds petty dang serious though.

Sounds bad. BUT THIS IS A FUCKING TRILOGY. A rated PG trilogy, but still, there is supposed to be two more of these! So of course Avatar guy figures out water powers during the attack, is amazing as fuck at them, and rapes everyone in the face. With water.

Then you know, it ends the main bad guy defeated, and some chick ready to take his place. 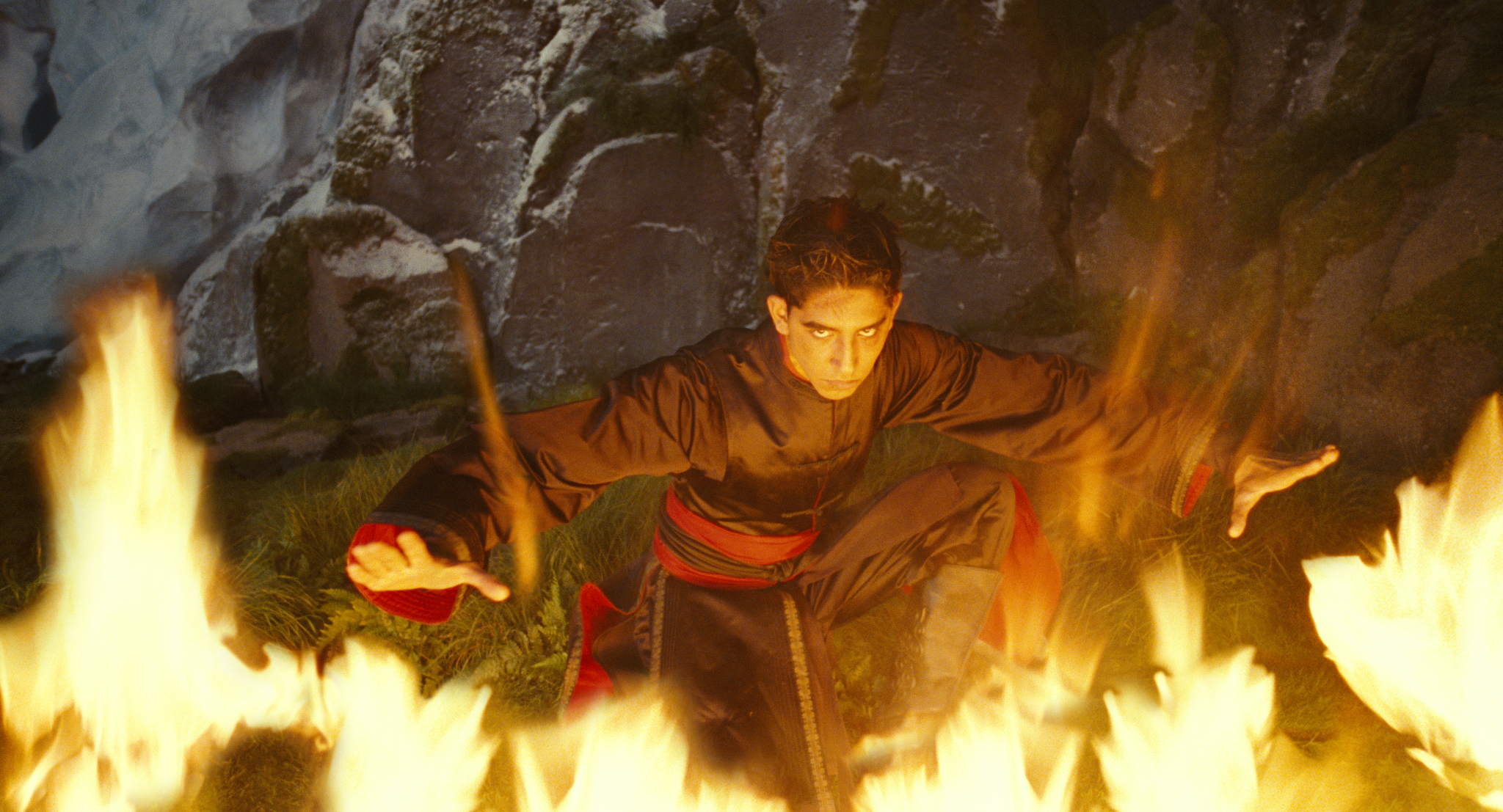 You thought I’d show the chick? To bad.

Hey, this story is pretty neat!

Not necessarily the movie execution. That was bad. I was fine with the pretty colors early on, but that faltered eventually. Honestly, everyone looked ridiculous in these fight scenes, doing random martial arts at each other, but not really fighting because its all elemental base. I mean, it could be cool, but it wasn’t that cool in the movie.

I understood that it was going to be a trilogy, but (and listen to me closely EVERYTHING), trilogies can be made of movies that still tell a complete story and don’t just punch you in the nuts. This complete story was what, dude learning about water and defeating one guy? No, the overarching goal is still there and I am disappointed. I want more. I feel like it’s not complete. Fuck. No one complains about Star Wars A New Hope because it is a story of a guy trying to be a Jedi, not like, save everything. He saves some things, but he completes his goal and we get a full fucking movie. This just leaves you like a fish out of water. Flopping around, waiting to die.

Again, the story sounds great. If anything, watching this movie is going to make me watch the cartoon (which should be one of the main two goals of fans of the cartoon from this movie to achieve. The other being a decent story I guess) and then I can comment on how much the movie got wrong from his source. But I am used to that. Just like movies from books, movies from cartoons will be different.

And they better be! I don’t want rehashing damn it. Tell me new stories.

But really, this movie isn’t as bad as the hype. It’s people being mad at the director for other things he has done, mad that it doesn’t 100% match the source, and arguing about the least important thing in acting (theater and move), the race of the person playing a role. Come on, this is the 21st century. We have a black president! That shouldn’t matter. When I saw The Lion King broadway, the kid Simba was black, but when he turned adult Simba, he was white. Was it hilarious? Yes. But it was also completely acceptable.

Still though. It could have been better.