Jackie Chan is a beast. Can anyone top this guy? He has been in a billion things, some good, some not so good. Hell, some times he is barely in the movie. But he is always the best part.

But for The Karate Kid remake, where Jackie Chan is trying to replicate the role popularized by the great Pat Morita? Can he do that? In a remake, will he still somehow be the best part of the movie? 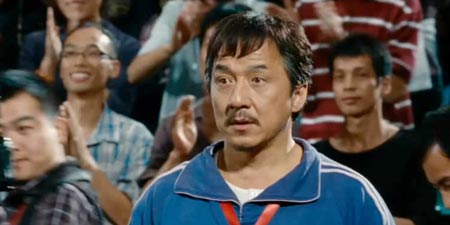 Yes. Even while looking like some sort of sailor scout.

So there are notable differences between this movie, and the original karate kid. So I won’t go over them, they should be obvious.

But hey, Jaden Smith is the star, and he lives with his single parents mom, Taraji P. Henson. They are living in the best city ever, Detroit, but they are transferring her job to China. What the heck. So they move!

China sucks for Jaden. When he was trying to impress this chick on the violin, Zhenwei Wang, some other guy gets mad, Wenwen Han, and tells her to get back to playing. Serious business, the violin. So they fight, and Jaden loses soundly. Then he has problems at school, not knowing the language. He wants to fight back, but instead of ignoring the bullies, he actively pisses them off more, by throwing lots of dirty water on the group of kids.

He then gets beat up again. Rightfully so, that time. He had no end game there. Run until what? Thankfully (?) Jackie Chan comes out of no where and saves him. The kids are mad and try to fight him too. So at this moment you are thinking that Chan is about to kick six middle school aged peoples asses in a fight? Pretty much. He doesn’t hit any of them technically, but also, whatever, it looks like he is beating up children.

They try to get the dojo guy to make them stop fighting, and get thrown out. They agree to leave him alone though until a Kung Fu tournament coming up, if Jaden enters. So of course he does, unknowingly, because he doesn’t speak the language. Then training happens. Questionable training involving his jacket, but not actual Kung Fu. Just kidding, somehow it helps. He also sees the Great Wall, a temple, masters of the art, etc. Then a tournament. Shady dealings, and final kick. 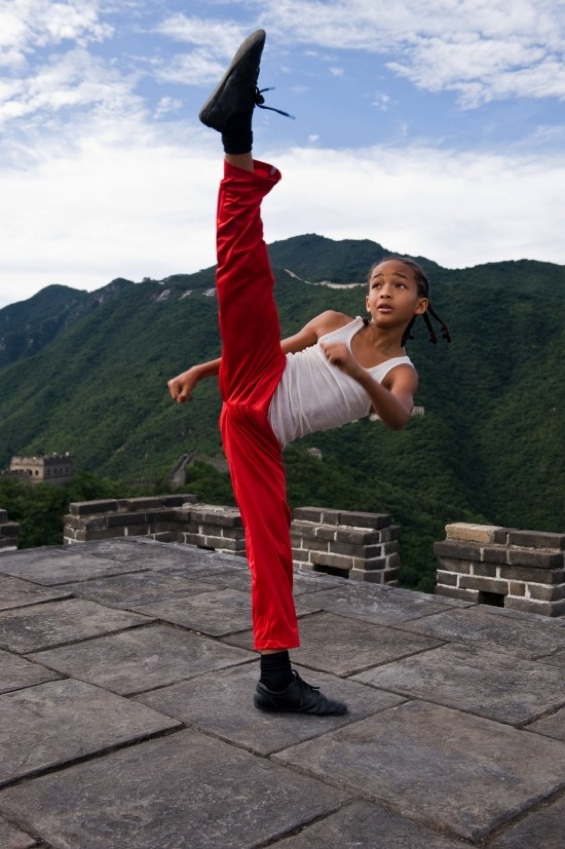 Size of picture is intentional. Take it all in folks.

Here’s what bugs me about the movie. Jaden Smith. Son of the William of Smith. I didn’t like him in this movie, I didn’t think it worked. They made the target demographic way too young. This is all involving middle schoolers. These love felt gestures, these crazy tournaments, all of that. It just feels weird when they are so young, not even in high school.

But really that is my biggest problem. A miscasting of the technically main role. I guess they salivated at the mouth at the thought of sequels, so if they do it while he is young, they can make more movies before he looks like he is some 30 year old mugging people with Kung Fu. Oh yeah, Kung Fu? In the Karate Kid? What?

That decision is also questionable. But everything else I loved. The movie could have been shorter, and the mom less annoying. But man, China. Good call. Lots of nice scenes, training was great, tournament was great. The last last scene had a little bit of a surprise to it too. I don’t think what happened is possible, thanks to physics, but hey, I didn’t expect it. I even rewatched the last fight, and slowed it down. Still kind of confuses me.