Somehow The Hunger Games came out to theaters in March, and I still was able to see it in a theater a few days ago. Crazier, considering the DVD comes out in a couple weeks (on a Saturday? Wtf?). Either way, yay Capitalism. 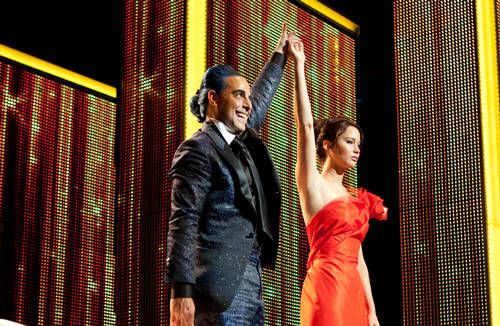 And woo to the future! Woo to human sacrifices!

In this future, America is split up into 12 Districts, and a Capital somewhere in the Rockies. There was a revolution, the capital won, and to pay tribute each district has to send 2 individuals aged 12-18, male and female, every year, to fight to the death. What?! Yeah, kind of fucked up and random. 80 years later, shit is still happening.

Our heroes are from the 12th District, somewhere in Appalachia, bunch of coal miners. Katniss Everdeen (Jennifer Lawrence) is really good with a bow, in her late teens, and has a younger sister Primrose (Willow Shields) about to be up for her first Reaping ceremony. Also, some dude, Gale (Liam Hemsworth), probably has a thing going with Katniss, but isn’t really important to this movie. Maybe later!

But yeah, at the choosing ceremony, of course Primarose gets randomly chosen, super unlucky. Katniss is like, no, none of this shit. Doesn’t want her sister to die, so volunteers in her place. The boy picked is some nobody, Peter Mellark (Josh Hutcherson). So Effie Trinket (Elizabeth Banks), the head kid snatcher, takes them to the capital, to represent district 12 and stuff.

Wait a minute. That was Elizabeth Banks? Picture now.

How in the heck is that Elizabeth Banks? I am completely taken aback by that fact. And man was that character annoying. She won a damn MTV movie award for Best On Screen Transformation, so at least MTV agrees with me.

They go to the capital, get their training on. Have a mentor who won from District 12 a long time ago, Haymitch Abernathy (Woody Harrelson), kind of an alcoholic. Also some fashion designer to help? I didn’t know what Cinna (Lenny Kravitz) did. Stanley Tucci is an Emcee, Wes Bentley runs the game, and Donald Sutherland is the president. 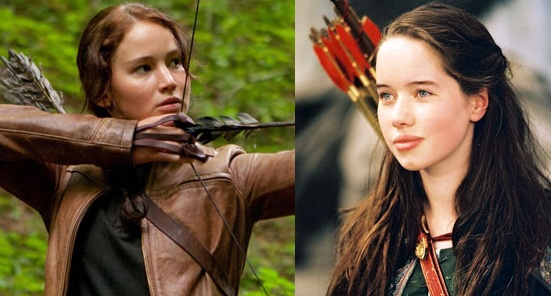 I definitely felt this movie was too long, and probably a better book than a movie. It had the feeling of a movie that wanted to fit everything from the book into the movie, but couldn’t, yet still tried. You know? Tons of what I feel as unnecessary scenes. And some wtf scenes. There was a riot in this movie, in another district, and I have no idea why it would have happened. Zero reasons why it happened in this tournament, and not any time in the 70 or 80 before hand. Just out of no where.

A lot felt confusing to me. The first half almost feels like it is entirely about impressing sponsors, but never fully explain it. When the tournament started, I was thinking “How the fuck is there no sponsors yet? What the hell is going on?” Far too much time on something unexplained.

And lastly I kind of got a head ache. They did some extreme shaky cam stuff with this movie. The movie had a good plot and acting. But my head hurt, because all of the action that the movie should have, given it is about a kill all the people tournament, was covered up by making it unintelligible. But it wasn’t just the killing. Just normal District 12 life was shaky cam. They rotated around Effie’s face in so many directions during her first speech, I got dizzy. And the zoom ins. They loved zooming in way too close to stuff. Just felt like an annoying mess, and less of a movie.

So really the biggest complaints are technical issues. And what felt like too much extra, pointless story line. I think this is what happens when you have the writer of the books trying to help with screen play and script. They feel everything is important. Totally isn’t.