Skip to content
HomeUncategorizedThe Hobbit: The Battle Of Five Armies

Ding dong the mother fucking witch is dead. That is how I am starting to feel about this franchise. In college, I wanted to do a semester abroad in New Zealand because it is a beautiful country, but now I think I have seen enough of it.

Everyone knows the Lord of the Rings are incredible, so I won’t mention them. I was really excited with The Hobbit: An Unexpected Journey, it was a bit longer, more CGI, but hey, let’s return to Middle Earth.

I completely hated The Hobbit: The Desolation Of Smaug. It was far too long, and it was a completely filler movie. I mean. FUCK. It didn’t end with the Death of Smaug. The obvious end point at least. It was just a long tease that made me bored and tired.

So, here we are, at The Hobbit: The Battle of Five Armies. Two things of note come up with the last part. First off, I really hate the title. I booed so hard and long once they announced the title change. It was originally The Hobbit: There and Back Again, a title taken from the book of his journey. Great title. This one is as lame as The Desolation Of Smaug (given that Smaug doesn’t get desolated).

Two, this one is going to be a lot more exciting than the second film. That much is certain. It is pretty easy to do when you leave like one cool aspect into the second film and delay the rest for the ending. The third film gives the end of the dragon and the big battle, so it will be super awesome. But at what cost? A shitty second movie. Given the connectedness of these films, it is important to look at them individually and as parts of a whole. So I don’t know if I can really enjoy this movie as much knowing that it was essentially delayed a year because the movies were broken up from two films into three films.

I think I am allowed to be a little biased and peeved going into this film, as I believe the second movie was 160 minutes of my life wasted.

But this one has tiny men on rams! Yay rams!

Okay so. Battle of Five Armies. Before that, we got a Smaug (Benedict Cumberbatch) to kill. And then they do that. Moving onnn.

Humans are all pissed off because their water town is destroyed. They have lost everything, their wealth, their homes. They need a place to go. Making Bard (Luke Evans) their de facto leader, they decide that they kind of want to head to the near by Dwarven stronghold for safety. And to get some of that gold that was promised to them.

Speaking of people who want to go to the stronghold, the wood elves are dicking around too. Apparently there is some priceless treasure in there that they want back. And that is all. A bunch of the elves are played by these people (Lee Pace, Evangeline Lilly, Orlando Bloom). Hugo Weaving and Cate Blanchett are elves too, but they are in another part of the story. I don’t really understand what they are doing with Christopher Lee and Ian McKellen, so I won’t talk about it.

Oh yeah. Dwarves. Like Thorin (Richard Armitage). He is now a real King because he has a real Castle, but he is after his special stone and is kind of going mad. Mad enough to go to war with the humans and the wood elves. But also, the orcs that no one know are coming. And Bilbo (Martin Freeman) is kind of just hanging around.

There are also non Dwarven actors, like Ryan Gage and Stephen Fry. But also all those Dwarves? I still don’t feel like tagging most of them. Just Billy Connolly, Aidan Turner, and Dean O’Gorman. I think I am done talking about the plot. And actors.

BUT WHO IS THE FIFTH ARMY? 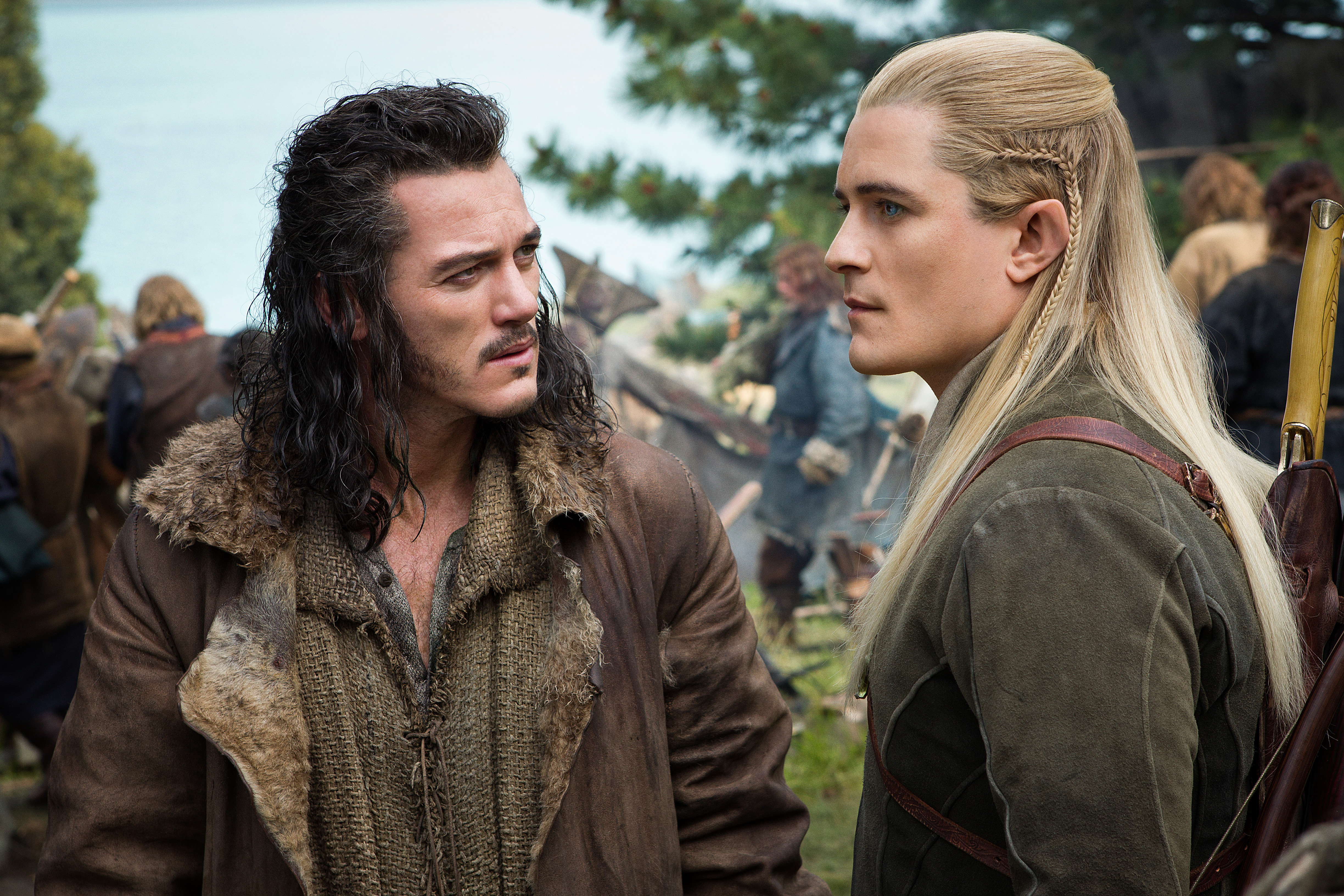 Orlando – “I heard you got a role in another franchise. Lucky. This one is finally owner.”
Luke – “Dude, no one is going to watch the Monster Avengers movies.”

And some of that was really cool. Well, the dragon death felt kind of rushed and awkward. Like, somehow, the cartoon version of The Hobbit had a more intense dragon death scene than this movie. It kind of just happened, exactly as one would expect too. So that was actually disappointing. Just that it ended so quick and easy, they could have made the death way more awesome and also, you know…put it in the fucking second movie?

Now the army fight was pretty bamf. So that is good. Entertaining fight scenes, although it was hard to follow just how many humans were actually in the war and how the battle grounds were laid out. You just kind of had to go with it and accept it, although I doubt it was planned out. Martin Freeman still made a good Bilbo, so that was good. But of course, the focus wasn’t really on him this whole movie, despite the title. He gets super pushed to the side.

The love story is not as bad as the second one I guess, because of all the fighting going on during it.

And as I said above, I have no idea what the point of the necromancer story line was. Like, they resolved it I guess, but it was totally unexplained and felt incredibly pointless. It was really shitty.

Overall, that makes this movie just okay. Not the weakest of the series, maybe the best. Hard to say. None of these match the LOTR quality and I don’t think that was their goal. But I can’t help but feel the entire franchise was a let down. I haven’t bought any of them, because I know I want to wait for the cool extended package with all of them bundled. But also, will I actually watch any of these again? Probably not. I will probably watch the cartoon Hobbit more.