If anything, you can say the work of Sacha Baron Cohen has at least been consistent in its efforts to talk about stereotypes, race, and making people feel uncomfortable. From Dat Ali G Show, to Borat, to Bruno, he can definitely take over a persona and push some limits, and isn’t afraid of showing his dick…multiple times.

Shit, I just realized that I have no idea what he actually sounds like. All of his smaller roles involve an accent as well. His voice is going to be the new “Johnny Depp look”. Aka, I couldn’t tell what Depp looked like until a few years ago, thanks to all his make up and crazy characters.

But with The Dictator, can he pull off the same shenanigans without making it a fake documentary at the same time?

Nothing says “fear and obey me” like standing in front of an army of women.

In the Republic of Wayida in Northern Africa, lives a Dictator who is beloved by his people. Aladeen (Cohen) is busy being rich from oil, doing whatever he wants, and whoever he wants. But shit starts to hit the fan when the UN claims he is building nuclear missiles, so he decides to go to NYC to address the issue.

His head of security and affairs, Tamir (Ben Kingsley) tries to take every precaution to protect Aladeen’s safety. Orders most of the rooms in a hotel, even hires additional security. Sure, it is just Clayton (John C. Reilly) who admits to hating all ‘Arabs’ whether or not they are Arabs, but what is the worst that can happen?

Ah, he gets kidnapped and they try to kill him after destroying his beard. But things go wrong, he escapes, but will anyone recognize him as Dictator Aladeen? Especially when…there is apparently another Aladeen in his place going to the UN, and declaring that his country will turn into a democracy? Oh shit, body doubles. If only we couldn’t tell from just the cast list who is behind everything.

So (Real) Aladeen ends up befriending a vegan hippie activist (Anna Faris) and a former Wayidian scientist (Jason Mantzoukas) to get his role back, before his country is signed as a horrible democracy and lose all their oil. 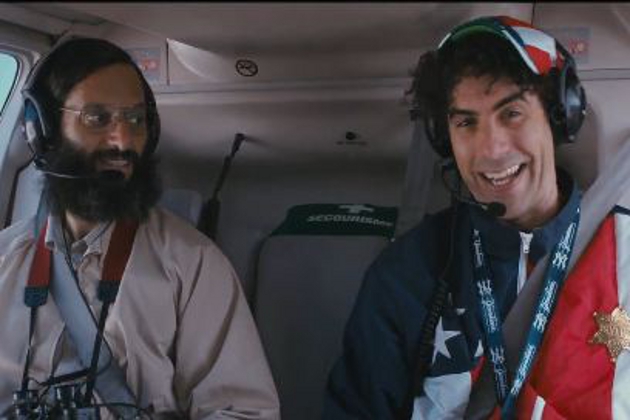 “My English is getting really good, I bet I can count from 5 to 0 faster than you, go!”

I think, overall, I found two aspects of this movie really funny. One was the above helicopter ride scene, where he tried to appear super american, but started talking in a foreign language, with the only English words thrown in involving stuff like “911”, “Empire State Building”, and “fireworks”. That scene was so over the top, I couldn’t stop laughing really.

The other is that as a dictator, he has replaced over 200 words with his own name, causing mass confusion. Most were whatever, but just one instance of that I thought was hilarious.

And now that I ruined the best parts, I guess you don’t have to see the movie! Most of it felt forced. It was supposed to be a political satire of some sort, but a lot of it I just didn’t care about. I would say it is actually on par with Borat like humor, but in that case we had at least real people falling for it and responding to what was being said, and not just other actors acting offended and confused. Turns out that something like that can make all the difference.

I still appreciate the dude’s work ethic though.