Huh, a Dreamworks movie about cavemen. That is what The Croods is about. Get it? They are simpletons, they are ‘crude’. I get it.

So now we all know that Dreamworks is still in business! Not enough failures, I see. 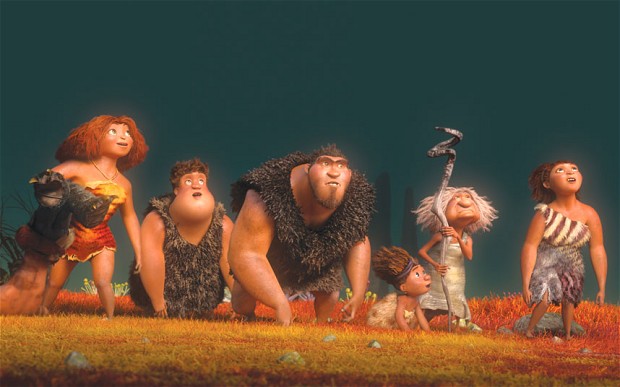 But give it enough time…

Cave men live in caves! Caves are safe (if not dark), because they protect from all sides, especially if you have a nice door rock. New things are bad, because new things can kill. Just ask all the other families who used to live nearby. Nope, just ignore that shit, and get your food, then go back to the gave.

Eep (Emma Stone) is going through your typical teenage girl emotional roller coaster. She hates the cave, wants her own space, but can’t leave. Grug (Nick Cage), her father, has basically forbidden it. Must. Stay. Together.

But she has a younger dumber brother, Thunk (Clark Duke), a baby sister, her mother, Ugga (Catherine Keener), and grandmother (Cloris Leachman)!

Unfortunately, food is getting scarce. Not only that, but Eep sees the sun, in the middle of the night. Fire? What is going on! Oh look, a new boy, Guy (Ryan Reynolds) who controls the miniature sun. Hell yeah. In fact, he might even have a brain. Maybe he has some ideas in there and other inventions. Well, there is his weird sloth named Belt (Chris Sanders).

Too bad he is talking about the end of the world. Seas of lava. Mountains breaking down. I wonder if that has anything to do with Pangaea breaking apart? You know, an event 200,000 years ago, and cave men were like, 20k. Oh well. I guess this will be as scientifically accurate as Ice Age 4.

I can see why they want each other. They are the only two in their age group.

Ughh. Ooogah ugh. That isn’t cave man noises, it is just me being discouraged. Basically, The Croods is about one thing and one thing only. Pretty color and cavemen joke. The plot isn’t ever really explained or talked about much. They just know they have to move, “or else”, trying to find a new cave or whatever. Learning about the world. When Grug finally accepts Guy, it is from a pathetic sob story that comes out no where. They talk about how everything can kill them, yet they survive basically every thing possible.

I think every character falls from huge heights and just tumbles and is fine, despite them being afraid of height for that reason. There i really no consistency with anything in this film. I know that it isn’t accurate, none of the animals or geology makes sense, so it is clearly another world. Basically, it is just traveling plus weird new pants/animals/colors to just go crazy with CGI. That is all it is.

Other inconsistencies bug me too. Like when they hunt in the early movie, they are running like crazy anime characters, dust clouds, even the grandma! But when they actually journey, it is a slow crawl. Alright, sure, run for your lives, but not too hard. This isn’t an inconsistency, but I hated the voice acting in this movie. Great cave people. Oh, they sound like Nick Cage and Emma Stone. Another factor taking me out of the movie, I don’t believe the characters at all because their voices don’t match.

This better not fucking sequel.