The Conjuring is the second horror movie to come out during the 2013 Summer Season (the other being The Purge) and I can honestly say I didn’t see this one coming. Seriously. I saw zero previews for it in the theater. I didn’t even know it existed until about a week ago. The good news is that I never actually watched the trailer ahead of time, which is a rarity now in my position, so the movie could be a completely new experience for me.

Check out the rating for The Conjuring. It was rated R “for sequences of disturbing violence and terror.” You hear that? It was rated R literally for being too scary. No nudity, no language, no gore, no sex, no drug usage. Just R on terror alone. As a well established coward, let it be known that I am freaking out already. 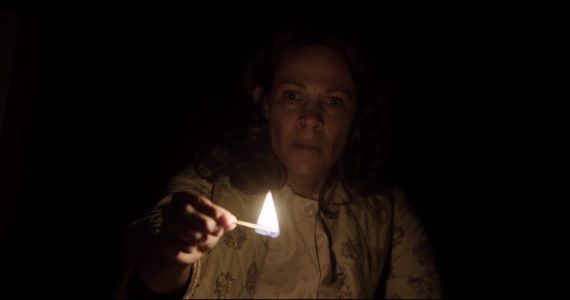 Shit, matches in the 70s used to be awesome as shit.

The Conjuring tells the “true story” of a case studied by Ed (Patrick Wilson) and Lorraine Warren (Vera Farmiga) in the early 1970s. I agree that those two were real human beings, with Ed being a Demonologist, and Lorraine a clarivoyant. They traveled around, helping with exorcisms, clearing houses of spirits, and other similar activities. They are most famous for helping the Amityville people.

The family they end up helping in this film are the Perrons: Roger (Ron Livingston) and Carolyn (Lili Taylor) and their FIVE daughters (Kyla Deaver, Mackenzie Foy, Joey King, Hayley McFarland, Shanley Caswell). Poor Roger, you can tell he needs help before the ghosts come.

Well, strange things start occurring around their house. All of their clocks stop at 3:07 am. Their dog died, birds fly into windows, their daughters get tugged on at night, sleep walking, ghostly spirits. Not to mention doors slamming in their faces and literally having demonic ghosts jumping on them.

They cannot move, having put all of their money into this house and land. Sucks to suck. Thankfully the Warren’s agree to help. They bring along their crew (Shannon Kook), set up cameras, microphones, and other devices, pre-modern day ghost hunters. After confirming that there are indeed spirits in the house, they set out to determine if they are sinister or just playful.

Yo dawg, there are rancid feet behind you. DO YOU NOT SEE THAT?

To me, The Conjuring felt like it was celebrating horror at its most basic roots. The story itself combines a bit of Poltergeist with The Exorcist, but into its own unique tale. The major elements in this movie are things we have seen before, but the smaller details are what make it something special.

I always talk about how hard it is for me to figure out a rating for a horror movie. Presumably it is based on some hidden formula combing entertainment and scare factor. After all, people go to horror movies to be scared, so if it ends up just being entertaining, you will be disappointed, and if it is just scary imagery, you will be confused.

I think The Conjuring combines these two elements in a pretty even fashion. It didn’t make me jump out of my seat every minute, but after the intro, I found myself at the edge of the seat until the credits rolled. The chill that something could go wrong at any moment stayed with you. It teased really well, and similarly had well placed humor moments just to throw you off guard.

The Conjuring proves that ghosts and hauntings are still scary. but even more surprising is that this movie was also well acted with a decent plot, truly the scariest thing about it. Similarly, this is the first horror I have given this rating in the last two years of hardcore movie watching.